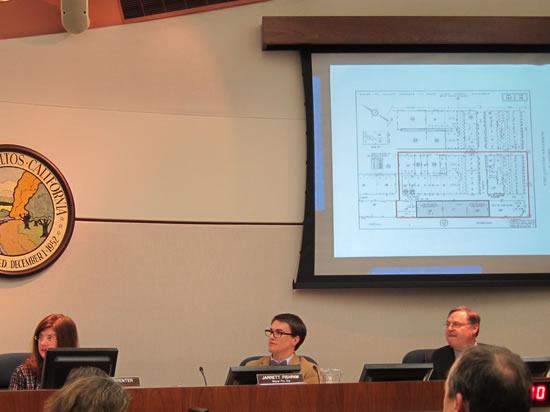 Here are the minutes of the Los Altos City Council meeting of Jan. 24, 2012 as heard by Los Altos Politico. If you are a property owner downtown near Safeway there are some details below about the Safeway Share Parking Agreement that may be of interest.

The Consent Calendar was passed by the Los Altos City Council. No one from the public, and no one from council requested that any  consent agenda item be removed from the consent calendar.

Los Altos City Council introduced amended code language and will send the changes back to the Planning Commission. Julie Rose, Chamber of Commerce and LAVA, spoke during the public hearing, asking that ribbons be limited to 2 weeks and that the display of A-frame signs by non-profits be allowed during the event hours, not just limited to real-estate A-frame days and hours, which are daylight hours Friday, Saturday and Sunday.

Then the public hearing was closed, and City Council discussion began.  Here are the results.  Ribbons will be limited to 2 weeks. A-frames for non-profit events will be limited to real estate days and hours.  Digital signs will be regulated as stipulated by Planning, limited to 15% of the front window and, if inside the store, set back at least 5 feet.  Council does not want to regulate lumens (brightness), as brightness is not a known problem.  If there are brightness complaints, it will address those down the road.

Staff described some of the recent small refinements to the Plan.  Signage was improved to stress that the parking in the ground level garage was PUBLIC. The “green walls” screening Foothill expressway were tweaked because staff wanted to preserve three street trees.  A wall screening the loading dock was to be lowered from 19 to 14.5 feet, as it would still prevent noise and light pollution of University Ave., and also be less bulky for the neighboring building at 110 First. Council members David Casas and Jarret Fishpaw took pains to explore whether the University Ave. residents were OK with the changes to the “green walls” and to the loading dock wall.

Below is a video clip of Chuck Geschke, co-founder of Adobe, and a 30+ year resident Los Altos. Urging approval of the Safeway project,  he says, “It’s time to get out of 1960’s and move into the 21st century.”

Public comments began. (The city attorney said there was no need to open as a public hearing.) There were 13 public commenters – all essentially PRO Safeway proceeding asap.  There were just a few quibbles.  Harry Price at 40 Main Street said he wished the parking limit were somewhat longer than the 90 minutes in the Shared Parking Agreement. Jim Bede asked that the “string lights” at State and First be removed to improve the pedestrians’ view of the stylish new Safeway. Mel Kahn was concerned that parking in lieu funds ( $500,000 from Safeway) should be segregated from the City General Fund.

Then the applicant’s project manager, Deborah Karbo,  interacted with Council.  She said that if approved tonight, the timeline would be about 4 months for planning and permit paperwork, and 10 months of construction. She said that the Shared Parking Agreement was a first for Safeway, that Los Altos City staff was excellent and had driven a hard bargain, that review of the agreement had gone beyond the CEO of Safeway, all the way to the Chairman of the Board. However, there were still a few small changes to the agreement that were to be clarified…on the spot by Councilmember Packard and the Safeway attorney.

Safeway is spending around $22 million on this project. Safeway estimates it will exceed the capacity of its parking lot only 3% of the 66,000 hours it is open a year. Its peak parking demand (4  – 6 pm weekdays) differs from peak downtown demand (11 am to 2 pm). Its employees will park offsite on busy holiday shopping days. They will not participate in the city “white dot” long-term parking program. There will be 154 spaces provided with 129 of them as Public for 90 minute visits.  Safeway will pay $500,000 in in-lieu fees.  Safeway alone will fully insure the parking garage. The complexity is in the termination clauses. Safeway has concerns that the city could approve projects in the near future that would “overgraze” on its shared parking causing loss of business for this Safeway.

Therefore the Agreement defines an “Area” from 2nd street to Foothill that encompasses the business therein and city parking plazas 7 and 4.

If in the first 5 years, the city drops the aggregate parking ratio in the defined “Area” to less than 95% of current (“current” omits the Morris Project) Safeway can exit the Shared Parking Agreement with a penalty of $1million less the $500,000 in in-lieu fees it will have paid in at occupancy.  If in the first five years, the city has maintained the parking ratio at or above 95%, but Safeway wants to exit the parking agreement for whatever reason, the penalty will be $2.8 million less that $500,000 in in lieu fees. In year six, if Safeway wants to exit, the penalty will be $1.5 million less the $500,000 in in-lieu fees.  (Finer points: the amounts are subject to adjustment every five years based on the Consumer Price Index; if it wants to exits, Safeway needs to give six months notice.)

Councilman Fishpaw noted and staff confirmed that the “Area” has about 200,000 square feet of building of commercial use. Therefore, these property owners, collectively, could add only 10,000 square feet of improvements  [sic before the 95% clause would kick for 5 years.]

…these in “Area property owners, collectively, could add only 10,000 square feet of improvements

Councilman Packard says there could be some easing of the situation.  In particular he said there was some talk of underground parking at the Morris project at 1st and Main.  He ventured that Plaza 7 (one across from Safeway) is the plaza that might expand.

The Motions and Votes

The Shared Parking Agreement as described above was passed by Los Altos City Council 4-0 with Megan Saterlee abstaining.  She said she was not against the agreement, but could not vote for an agreement she had not read.  (The latest agreement document had been circulated only shortly before the meeting.)

The University Ave. neighborhood along Foothill Express way and Lincoln Park is a big beneficiary.  They have been living with a so-so chainlink view of Safeway’s backside since 1969.  Some people have had a grim view of semis  coming to the loading dock to make make deliveries both day and night.  All that will be tastefully screened away now, thanks to the Safeway redevelopment project. Reps from the VTA presented early plans for dedicated bus lanes  with an option for bike lanes on El Camino. See this link for a full story.  Gary Heaton, a avid commuting biker say he never rides a bike on El Camino, but any plan should include the bike land option. The City of Los Altos needs to comment in writing on the VTA proposed plan by April.

Godsbe Research clarified that the call list would  include listed, unlisted and cell phone numbers, at least for the part of the sample drawn from the voter database. Two public commenters urged that the survey be delayed for a year – too many people haven’t seen the “new vitality” and changes downtown.

Councilmember Packard said  that there is no need to screen public officials out of the sample.  Also include a question if they have a business or property downtown. Just record that affiliation.  Council member Fishpaw asked if  respondents could be asked an additional question – Do they approve of permitting 1 story buildings to redevelop as 2 stories?  Council member Megan Saterlee said that most respondents wouldn’t understand how that is different from approving of 3 stories, and thus the question was not necessary.

Megan Saterlee said it was not a time to wait but rather a time to reach out to the “Silent Majority” because this group is used /abused by interested parties to justify zoning policy changes. She said that by definition, a lot of the Silent Majority is not going to have an “informed” opinion.  The point is to track the opinion every couple of years to see if the silent majority is changing opinions.