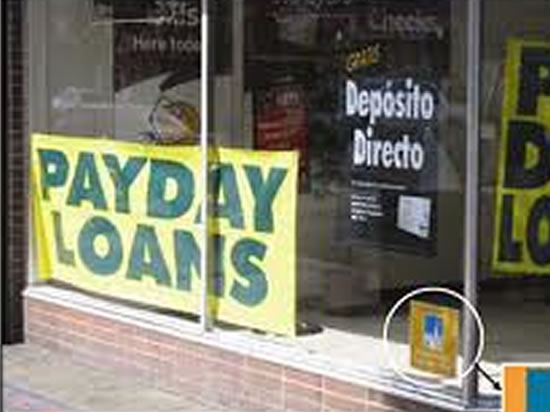 Stop Pay Day Loans in Los Altos before they begin

RESOURCES:
Attachments in a large single .pdf file can be downloaded here from LosAltosPolitico.com.
If you prefer the City’s individual .pdf  files go here. Click on the second of two underlined items.

Items 1-6 on the Los Altos City Council Agenda are not discussed  by  council but rather  are just approved by a single vote of council, unless a member of the public or a council member pulls them out of the consent calendar.  Items so pulled are usually discussed AFTER all the discussion items on the agenda. The consent items below could be approved, received, etc. as soon as 7:05 pm.

7. Zoning Moratorium on Payday Businesses – Fishpaw and Casas are asking that the City Attorney be authorized to research banning or at least regulating such businesses.
EDITORIAL COMMENT:   Quashing financial predation is a goal of the Silicon Valley Foundation.  Other cities seem to be banning or regulating such businesses.  It makes sense to make sure there is no incentive for them to move to Los Altos.

–60th Anniversary of Incorporation Planning Committee: Work with a committee of community volunteers to create a series of events during 2012 to celebrate the 60thanniversary of incorporation of the City of Los Altos on December 1, 2012.

–Redwood Grove Committee: Review the facility requirements, restrooms and bridge improvements recommended by the Parks and Recreation Commission, and develop and recommend next steps to Council.

–Stevens Creek Joint Cities Forum: Work with the Cities of Cupertino, Mountain View and Sunnyvale to support the completion of the Stevens Creek Trail.

EDITORIAL COMMENT: Residents of the University Ave. neighborhood will be able to breathe a sigh of relief after the title for Lincoln Park is transferred from the County to the City.  Only in the past few months, City Council rezoned the land from single-family residential to Community Facilities (passive facilities with no restrooms or other park investments).  It’ll be nice to know that for decades to come the land will remain a low-use green buffer between their homes and Foothill Expressway, thoughtfully maintained by all us Los Altos taxpapers. How nice of us.

9. Ad-Hoc Contiguous Retail Committee – This will allow study of using an “Amortization” action to boot out banks, the costume bank from downtown in 3 years or so.  Since 1988 non-retail uses of the street level have been “non-conforming”.  See this post for more info and analysis.

EDITORIAL COMMENT: Public commenters could possibly have impact here.  But it is the last item, so probably few people will bother to show up.  Instead maybe send a letter that could be read into the record by the Mayor Val Carpenter.

RESOURCES: Attachments in a large single pdf file downloaded here from LosAltosPolitico.com
If you prefer the City’s individual files go here. Click on the second of two underlined items.