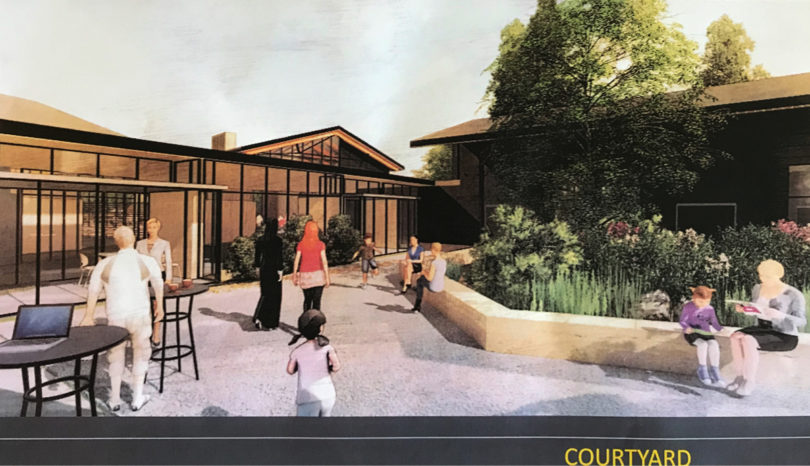 …The brand new renderings of the exterior — still quite preliminary by the way —  incorporate a Task Force preference for gable roof concepts with a contemporary feel. In the C1 concept some of the gables are so-called split roofs…with a celestory window down the spine.  This permits natural lighting…

On Nov. 30 Tam & Noll architects presented some preliminary plan exterior renderings and layout diagrams of two Hillview Community Center concepts…refining a Nov. 7 “triangle” floor plan the Hillview Task Force preferred then.  On Nov. 30 the committee chose the C1 version of the two presented. I share the C1 slides with you below.

The new exterior renderings — still quite preliminary by the way —  incorporate a Hillview Community Center project Task Force preference for gable roof concepts with a contemporary feel. In the C1 concept some of the gables are so-called split roofs…with a celestory window down the spine.  This permits natural lighting. T&N said there might be more glass shown now on exterior walls than an energy audit that they do later will allow.

Virtually all Hillview Task Force members like both concepts shown last night, but six of the nine members present leaned toward the C1.  Members heaped praise on the architects and landscape designers.

Take a peek at the renderings below.

Figure 1: Concepts as Selected at prior meeting on Nov. 7 per architect On Nov. 7, the Hillview Community Center project Task Force chose this triangle plan. Less popular were a square courtyard plan and a spine plan with an interior hallway and no courtyard. Landscaping and perhaps trellises are the main elements for defining a pedestrian connection to the library. You can clearly see the roof lines here and the relation of the project with the surrounding neighborhood. The Hillview Community Center project Task Force preference was for the Senior Center on the SW corner and the Community Room on the south wing.  The positions of the rest of the rooms is in flux. Except probably for the kitchen, lobby and cafe. Admin, restrooms, meeting rooms, and other rooms are likely to be switched around.  The triangle shape remains.

Figure 5: Varied Roofs create a sense of many smaller buildings It’s the tallest element, drawing  attention, and is  directly at the end of the roadway from San Antonio. Entry way into lobby on left…senior area off to the right. There is line of sight from outside… through the lobby… into the courtyard. There might be somewhat less glass wall… after the architects do an energy audit. The nature of the sun shielding could evolve.

Thank god “we” made this progress. It’s looking more promising than I had dared to hope. Thank you Hillview Community Center project Task Force members and chairperson Claudia Coleman.