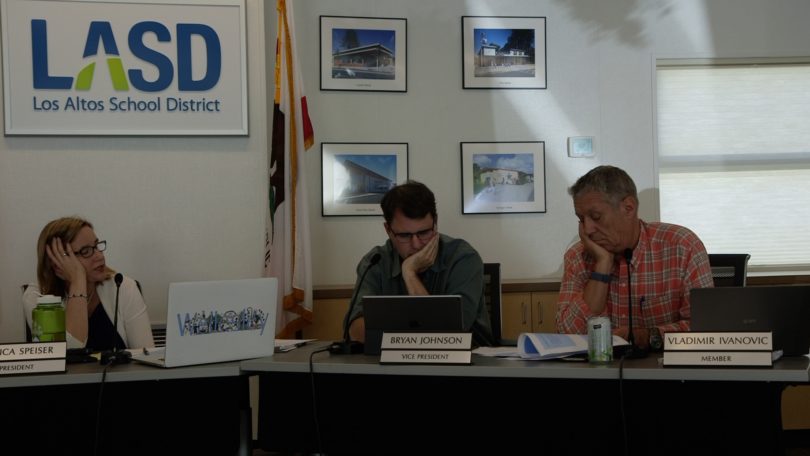 Here is a video of the June 19, 2019 meeting of the LASD board of trustees. The District’s video recording was not working that evening…so this is what you’ve got. We have better video than the Granicus system captures.  But our video is only of two agenda items – Voting on the 10th Site Purchase Agreement and discussion of the upcoming “Move Egan” Community Engagement Plan.

Discussion of CHAC renewal was omitted from the video. FYI: The board vote was 5-0 to renew the CHAC contract, with the yearly fee rising from 160,000 to 175,00 this year. As Trustee Sirkay remarked, ” A bargain for what they do.” [Help youth avoid or recover from substance abuse problems.]

Based on their June 19th discussion, it seems the majority of the  Trustees only want to present the PUBLIC info about the BCS-LASD negotiation processes… info that was offered to the PUBLIC previously …over the past 12 years. Yes, it is useful to be aware of the long history…but….

But parents and citizens asked in April 2019 to know what options the trustees had evaluated recently in PRIVATE as a board besides the “Move Egan” proposals.

What were those 5 to 7 alternative options besides “Move Egan”… that the trustees are not revealing… and why were they rejected by the board as a  solution?

What was their thinking? What were the key issues – tradeoffs… that made those options sink to bottom of the list as far as the Trustees were concerned?  We are not going to know. Because the trustees are not going to reveal their recent thinking/analysis apparently. They only want the citizens to know the long, ancient, publically available history. Yes, useful, but not enough.

In addition to the “community engagement plan,” the LASD board discussed  more details about the deal for the Kohls 10th site.  This is the deal where the total price is $155M but LASD only pays on net $28 million. It is scheduled to be signed by the end of the week.

Yet the cash flow to pay for it all is still up in the air.  Will all the Transfer of Development Rights  (TDR) buyers – about $80 million worth of them – stay the course and close the 6 or 7 deals on their intended purchases of TDRs?

Who knows. As of now, there still is land price risk/uncertainty for LASD. If the TDR buyers back out, the land will become expensive…we hope not.

Happily, the District can back out of the whole deal with Federal Realty up till Oct. 25. As Trustee Bryan Johnson explained, “This is a contingency period.” The district is putting up a mere $1 million of earnest money on the agreement with Federal Realty. The District can back out up till Oct. 25 and still get the $1 Million good faith money back. Close is scheduled for Nov. 13.

Besides worrying about the TDR buyers resolve to follow through on intent to buy, the District needs to jump through California Department of Education (CDE) hoops about buying a new site for a school. There is a lot of testing and evaluation ahead in the next few months. Lalah thinks the site is clean… but the hoops are there.

The first 8 minutes is about the 10th site details, the next 60 minutes is a discussion of the community engagement planning. Viewing via the Youtube links offers more user controls, including time stamps. https://youtu.be/ug6qWtks35w

Don’t like the walk to your school? Bug you city about it says the CDE.