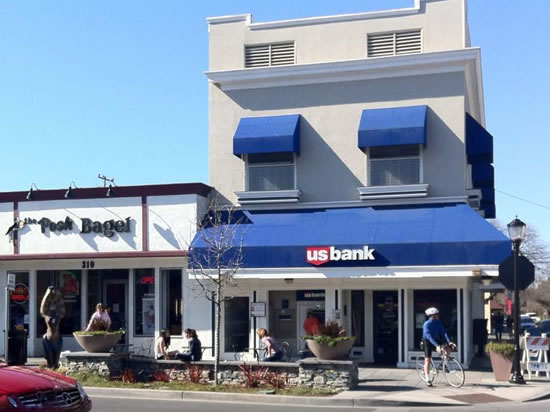 Packard says this bank is in a non-conforming building

Here are the Los Altos City Council Meeting Minutes as compiled by Los Altos Politico. We attended this meeting and reviewed parts of it on streaming video. This is in chronlogical  order as it occurred.

The most striking item is the formation of the ad hoc contiguous retail committee to research booting out non- confirming use and non-conforming buildings – mostly banks – downtown.

The meeting began with the Girl Scouts making a special presentation of the “colors,” aka a flag procession.  After the Pledge, Mayor Val Carpenter made a proclamation about the 100th anniversary of girl scouting. There were certificates of appreciation and photo opportunities for parents. Mayor Carpenter noted that the Girl Scounts have been active in Los Altos since 1922.

PUBLIC SPEAKERS – items NOT on the agenda

Los Altos High School Green Team: Students from Los Altos High took turns speaking for an early ban of the use of plastic bags in stores both large and small.  They hoped it could be accomplished in 2013 rather than 2014 as previously announced by the city. Council members asked if they were going to neighboring towns like Mountain View making the same request.  The girls said yes they were going to Mountain View and they recognized it would be good if the date for banning were coordinated to occur all on the same date.

Micheal Teague, WOW ( Walk or Wheel)  from Green Town Los Altos reported favorable school biking and walk statistics for the winter. 40 percent are walking, biking or carpooling. Biking and walking dipped only -2% during the winter.

A speaker said that his hedge was ruined by the city as it put up a street sign He the city to help with the landscaping.

.pdf file of the agenda packet can be downloaded here from LosAltosPolitico.com.If you prefer the City’s individual .pdf  files go here. Click on the second of two underlined items.

Items 4 and 6 were PULLED out of the consent calendar.

All other consent items were PASSED without discussion by consent.

7. Zoning Moratorium on Payday Businesses – The council discussion was quite long.

Fishpaw and Casas initiated this idea asking that the City Attorney be authorized to research banning or at least regulating such businesses. A speaker from Cash America representing the “community lenders” industry association asked that the study of payday banning be deferred until he could meet with council and explain what the industry is doing and how it is already regulated.  Megan Saterlee asked why have a ban when there are no such businesses in LA now?  Casas said to was better to get in front of the need to regulated the payday zoning – be proactive rather than reactive. After further discussion, council approved having the city attorney research a ban or zoning regulation of payday lending business and to impose  45 day moratorium on permuting such businesses.

EDITORIAL COMMENT:   Quashing financial predation is a goal of the Silicon Valley Foundation.  Other cities seem to be banning or regulating such businesses.  It makes sense to make sure there is no incentive for them to move to Los Altos.

–60th Anniversary of Incorporation Planning Committee: Work with a committee of community volunteers to create a series of events during 2012 to celebrate the 60thanniversary of incorporation of the City of Los Altos on December 1, 2012. –Val Carpenter reported that there was another meeting coming up.

–Redwood Grove Committee: Review the facility requirements, restrooms and bridge improvements recommended by the Parks and Recreation Commission, and develop and recommend next steps to Council. –Council Member Casas said the existing budget needed to be changed to incorporate additional bank stabilization work by Acterra. Casas says there continues to be other work, expansion of ” bird nest”, erosion work, that are not yet contained. So that ad hoc committee will come back in 2 weeks with details.

–Stevens Creek Joint Cities Forum: Work with the Cities of Cupertino, Mountain View and Sunnyvale to support the completion of the Stevens Creek Trail. — Saterlee reported there was some budget shortfall in the project. Also that it still was not decided if the trail route would pass through Los Altos lands or not.

–Bus Barn Theater Ad Hoc: Renegotiate the agreement for lease of the Bus Barn Theater. –Packard reported that lease is likely to be completed by end of November after we schedule an appointment with them.

No motions were needed.

EDITORIAL COMMENT: Residents of the University Ave. neighborhood will be able to breathe a sigh of relief after the title for Lincoln Park is transferred from the County to the City.  Only in the past few months, City Council rezoned the land from single-family residential to Community Facilities (passive facilities with no restrooms or other park investments).  It’ll be nice to know that for decades to come the land will remain a low-use green buffer between their homes and Foothill Expressway, thoughtfully maintained by all us Los Altos taxpapers. How nice of us. Packard says this bank building is non-conforming, more than 25 feet

9. Ad-Hoc Contiguous Retail Committee – This will allow study of using an “Amortization” action to boot out banks, the costume bank from downtown in 3 years or so.  Since 1988 non-retail uses of the street level have been “non-conforming”.  See this post for more info and analysis.

Jarrett Fishpaw gave a masterly presentation of the slides which are in the City Packet for this item. If you download the agenda at the end of this article you will have the presentation. Or you can watch the video clip.

More interesting were Ron Packard’s more off the cuff remarks. He said he first learned about the tool of “amortization” when Palo Alto placed an 8 year amortization on Frys because the city wanted the warehouse torn down for more housing.  Packard tried to defend the warehouse owner, but that failed, as is usually the case is fighting an amortization.  As it turned out, Palo Alto made so much money from the sales tax, and so many residents came to love Frys, that the amortization was removed in a few years.

Mr. Packard said that some of the Main Street bank property owners were quite happy to regularly be receiving their rent checks from the tenants.  These owners were not interested in making development changes.  Mr. Packard believed such owners need a nudge. He stressed the idea of amortization is only being explored at this time.  There is no presumption an amortization trigger would be pulled.  He stressed that the research, discussions, negotiations, and the waiting would take 4 to 6 years. He joked that he hopes to be back on council in 4 to 6 years to see the fruits of the contiguous retail committee

Megan Satterlee asked how much the study would cost.  Packard said $20k. He believe he and Fishpaw can complete the study in the next 6 months before Packard’s term ends.

Val Carpenter asked that the study should clarify where personal services can be located in the core. Is that still State Street?

On Mar. 27 Packard will come back with the the list of community committee members and a request for $20k for city attorney time. The attorney clarified it will be a single subject ad hoc committee not subject to the Brown Act.  However, Packard said there would probably be one or two public meetings to receive community input. The council approved the formation of the ad hoc contiguous retail committee. They will look towards approving the members and budget at the regular March 27 city council meeting. Packard says this bank, at 25 feet ,is a conforming building

10. City Manager  Goals — This could have been a totally open ended, first pass discussion.– No public speaker showed up.  Council agreed that there would be a private meeting to actually orient Ms. Summer and mutually agree on her goals once she is actually an employee.  Casas asked the public to email goal suggestions to him  or the council at large. Council did not discuss what they thought her goals should be.
Item 4.
Downtown Parking Plan – towards a RFP to find a consultant costing $100k to $200k.
Los Altos City Council will approve that staff draft an RFP that would hire a consultant  to develop a Downtown Parking Plan with consideration of financing options for additional parking if needed, such as a parking in-lieu program, assessment district and public-private partnerhsips. The cost of the consultant could range from $120,000 to $275,00. The draft will have to be approved by council in regular meeting later this spring. A budget item could be added in the June FY quarter.

Public Speakers:
Mike Abrams spoke for considering civic center parking together with downtown parking and to have a 30 year horizon.

Edith E. Egan, said her property bordered Edith.  She was concerned about a garage structure being built on the North area of downtown. She said impacts would be traffic, noise, crime. Please canvas us residents was her request.

City Manager Schmitz said the RFP would be ready in April and May.  The public would be able to see it then and comment on what it contained or did not. Also at that time an exact project CIP cost would be determined.

First and State Streets/String Lights at the new Safeway– will move forward as planned.

After considering concerns of James Wing, the City will approve string lights as designed.  The staff report says all the poles and wiring are already installed and paid for.

If you prefer the City’s individual files go here. Click on the second of two underlined items.