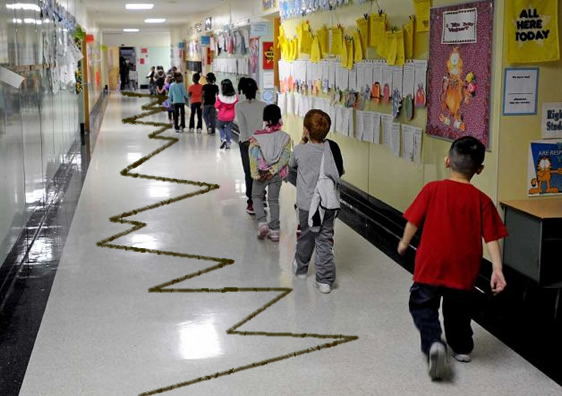 UPDATE May 20, 2019: This page was published 5 years ago. I still try to publish about whatever illuminates the situation for ‘newcomers.’ Last month LASD tried to replace the 2014 negotiated five-year agreement for facilities with BCS with a new ten-year agreement that would move Egan Junior High to a new location and a new facility in the far north of the District. It would place all 1100+ BCS students on a single campus – Egan.  There was a considerable parental and some neighbor backlash.  So now the LASD trustees are embarking on a public education/engagement process that will occur in the fall of 2019. It aims to collect and organize the facts about the Charter Law and the facilities situation. Its stated aim is to reach out to the broad community, not just parents. Some trustees hope that 51% of participants? of taxpayers? of residents? will reach a consensus. We’ll wait and see.

Original: On the pages in this web site menu – BCS vs. LASD –  Lalahpolitco expects to collect facts about the Bullis Charter School “situation.”  You may have read the parents and other community members commenting online on Los Altos Town Crier articles online and on Patch.com online articles.  There are quite a few assertions, arguments ( some logical, some specious) and even some facts. [UPDATE: In 2019, nextdoor.com is a new source for slanted information, misinformation and even pure propaganda.]

Leveraging the work of others, collating the good,  I will post pages here that I believe illuminate the situation, especially for a newcomer, or community members who just didn’t follow the developments over the past 12 plus years ( like me!). So I have been learning about the “situation.”  I will attempt to distill the information, but still be comprehensive enough to not “lie by omission.”

The first page we post is one on the often heard theme of – “BCS is wealthier. ” It is about BCS’ diversity outreach for 2012-13.  In the past, and still today you will hear BCS being criticized for being for a select and privledged few.  Maybe upon it’s inception in 2003 there was less sensitivity to diversity – being focused on survival and a start-up’s learning curve – but the chartering authority SCCBOE has helped BCS improve its processes. Take a look at our page describing its enrollment outreach today 2012-2013. UPDATE: January 2016 – The latest BCS postcard mailer about enrolling for the 2016-2017 year had a second side in Spanish.

UPDATE: 2015 — BCS and LASD agreed to bury the hatchet and made a 5 year agreement for facilities; as part of that agreement BCS will reduce and finally give up the admission preference for the old Bullis Purissima attendance area.

UPDATE May 2019: with the expiration of the 5-year agreement in the fall of 2019, BCS reintroduced its preference. Lalah does not know the details. The lottery and enrollment occurred in January 2019, much earlier than usual.

ORIGINAL: It is true that in 2008 – when LASD reopened a K-6 school back on the  Bullis-Purrisima campus (closed in 2003), BCS asked for and received permission to have an in-district geographic preference for 50% of its enrollment openings from the old Bullis Purissima attendance area.  Normally, only a “conversion” charter gets that, but I guess SCCBOE thought BCS was a partial “conversion.” Is that a biggie deviation from diversity? We’ll soon post the statistics that say No, it’s not.

In the near future, I hope to gather the  facts and where possible statistics about the lottery process, about the curriculum, about special ed, about low income students…and of course about finances.  We expect to compare BCS to LASD and all to other nearby districts…just to get perspective on social justice among the providers of public education around us.