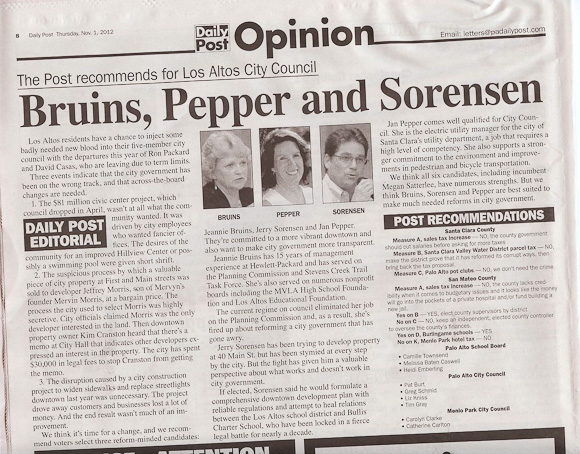 Los Altos residents have a chance to inject some badly needed new blood into their five-member city Council with the departures this year of Ron Packard and David Casas who are leaving due to term limits.

Three events indicate that the city government has been on the wrong track, and that across-the-board changes are needed.

1. The $81 million civic center project, which council dropped in April, wasn’t at all what the community wanted. It was driven by city employees who wanted fancier offices. The desires of the community for an improved Hillview Center or possibly a swimming pool were given short shrift.

2. The suspicious process by which a valuable piece of city property at First and Main streets was sold to developer Jeffrey Morris, son of Mervyns founder Mervyn Morris, at a bargain price. The process the city used to select Morris was highly secretive. City officials claimed Morris was the only developer interested in the land. Then downtown property owner Kim Cranston heard that there’s a memo at City Hall that indicates other developers expressed an interest in the property. The city has spent $30,000 in legal fees to stop Cranston from getting the memo.

3. The disruption caused by the city construction project to widen sidewalks and replace streetlights downtown last year was unnecessary. The project drove away customers and businesses lost a lot of money. And the end result wasn’t much of an improvement.

We think it’s time for a change and we recommend voters select three reform-minded candidates. Jeannie Bruins, Jerry Sorensen and Jan Pepper. They are committed to a more vibrant downtown and also want to make city government more transparent.

Jeannie Bruins has 15 years of management experience at Hewlett-Packard and has served on the Planning Commission and Stevens Creek Trail Task Force. She’s also served on numerous nonprofit boards including the MVLA High School Foundation and Los Altos Educational Foundation.

The current regime on council eliminated her job on the Planning Commission and, as a result, she’s fired up about reforming a city government that has gone awry.

Jerry Sorensen has been trying to develop property at 40 Main St. but has been stymied at every step by the city. But the city has given him a valuable perspective about what works and doesn’t work in city government.

If elected, Sorensen said he would formulate a comprehensive downtown development plan with reliable regulations and attempt to heal relations between the Los Altos School District and Bullis Charter School, who have been locked in a fierce legal battle for nearly a decade.

Jan Pepper comes well qualified for city Council. She is the electric utility manager for the city of Santa Clara’s utility department, a job that requires a high level of competency. She also supports a stronger commitment to the environment and improvements in pedestrian and bicycle transportation.

We think all six candidates, including incumbent Megan Satterlee have numerous strengths. But we also think Bruins, Sorensen and Pepper are best suited to make the much needed reforms in city government.