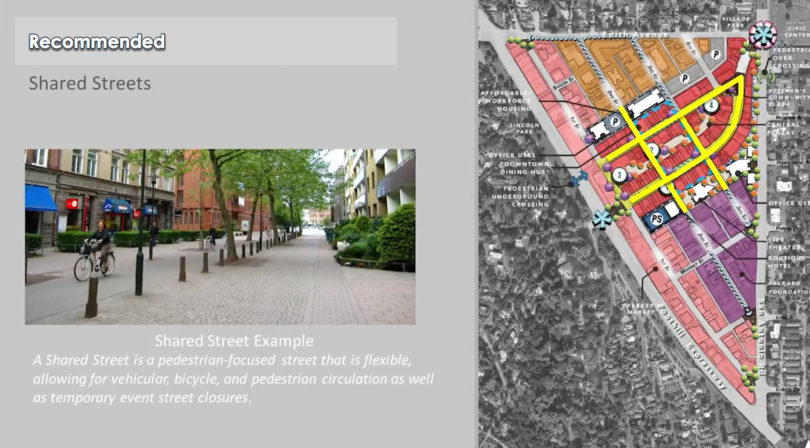 On May 22, 2018, the RRM consultants presented their recommended Downtown Vision scenario based on over six months of engagement with the public. It is none of the four example scenarios presented to the public, but rather an amagalm of the most popular elements from the four.

Ironically Tuesday was the same night Council started to discuss the Save our Parks (SoP)  initiative, a change to our General Plan which would effectively prevent improvements to the downtown “public lands” a vague, roundabout way of saying…prevent most improvements to the parking plazas…as suggested in the Vision.

Bruins and Pepper said a final 3-D graphic was missing from the RRM deliverables.  Lalahpolitico:  Yes this was something Council wanted to use to promote the Downtown Vision to the public. A parklette on plaza 5 is a recommended Downtown Vision element

Lower parking ratios to 2.0 stalls per 1,000 square feet for the downtown core – Main and State.  This applies to restaurants, retail,  everybody.  For the other area, lower parking ratios to 2.5 stalls per 1,000 square feet; this applies to office, housing, everyone.  Lalahpolitico:  The consultant believes in “shared parking.”  For example, a performing arts theater downtown, even if it is built on a city parking plaza, should not be required to supply any parking.  People attending evening performances would find of vacant parking at that time of day.

Create “Shared Streets” on 2nd and 3rd Streets.  I believe this is the concepts where the curb is removed and pedestrians are encouraged to use the whole street.  I believe this makes it easier to bicyclists to avoid First Street and use these alternative streets. [see the top photo on this post] Economist Mr. Lee recommended parking ratios of 2.0 to 2.5 per 1000 square feet throughout the downtown triangle. He also favored investment in modern parking management/enforcement, rather than building more parking.

Create an overpass from the Library to Downtown

Build a hotel of about 60-70 units for the Hotel Tax revenue flow…on a parking plaza (#2 suggested?)

Build a performing arts theater on a parking plaza RNN retreated from recommending 3 stories on Main and State as previously shown 5 months ago on the third building from the left.

On State and Main,  zone for 2 stories with a 35 ft. Max Height.  RRM says this permits 16 feet on the first floor which is required for modern retailing. RNN said about half the community was opposed to more than 2 stories at this location.  About half the community seemed to define “character” as requiring 25 foot wide, fake storefronts, aka “architectural articulation.”   Mordo asked if there was any way to encourage parcel aggregation. Mr. Lee the RRM economist, said, Yes, bonus FAR (floor area ratio) could be awarded for parcels larger than 25 feet wide to encourage aggregation. [Google search: Donald Shoup graduated density bonus]

Lalahpolitico: REMINDER: For a mixed-use or housing project, the State density bonus law or the local Los Altos version applies.  Extra height and density is awarded for affordable BMR units.

SOME COUNCIL DISCUSSION of
the RECOMMENDED DOWNTOWN VISION

Jeannie Bruins asked RRM  if there was any economic potential for downtown businesses and or/property owners to form an assessment district to help pay for some of the recommended Downtown Vision elements.  the Economist Mr. Lee said, No, not unless downtown building heights were raised to six stories.

Jean Mordo asked Mr. Lee of Land Econ and RRM if he had seen the Chamber of Commerce parking study? [ The scheme had the downtown commercial interests paying for half the costs of a 3 story parking structure ]. Mr. Lee stuck to his recommendation to just lower the parking ratios and rely on shared parking. He recommended more enforcement, rather than the construction of more parking stalls. Lee seemed to say the City was unfortunately very reluctant to consider parking management/ enforcement measures that other cities routinely apply – parking meters,  higher prices for employee parking permits,  etc. [Google search on Donald Shoup, The High Cost of Free Parking!]