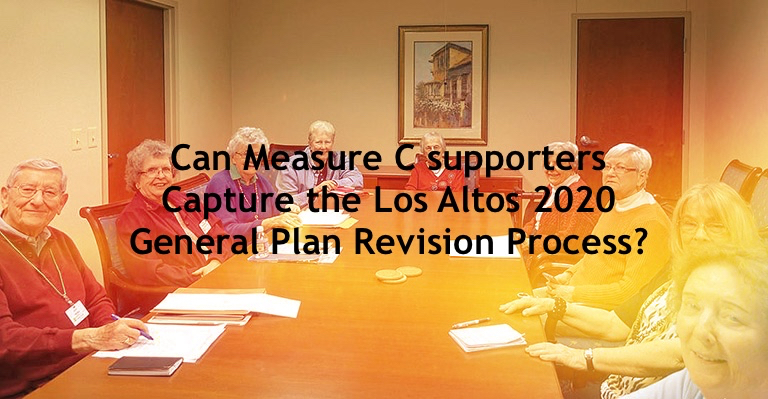 The top leadership team and notable supporters of the 2018 “Yes on C” movement – “Don’t sell our parks” – was out in force at the Feb. 26, 2019, Los Altos City Council meeting. Jim Jolly, Mike Ellerin, (both men named in Measure C campaign forms) Roberta Phillips (Mayor Lynette Lee-Eng’s campaign manager), and Teresa Morris ( a losing 2018 city council candidate) all spoke in favor of a new convoluted, citizen committee process for revising the Los Altos General Plan 2020 – “our city constitution.” The proposal for the process was pitched to City Council in a 2-minute long public comment by resident Kate Disney.

The top leadership team and notable supporters of the  2018 “Yes on C” movement – “Don’t sell our parks” –  were out in force at the Feb. 26, 2019, Los Altos City Council meeting.  Jim Jolly, Mike Ellerin, (both named as sponsors in Measure C campaign forms),  Roberta Phillips (Mayor Lynette Lee-Eng’s campaign manager), and Teresa Morris ( a losing 2018 city council candidate) all spoke in favor of a new, convoluted, citizens’ committee process for revising the Los Altos General Plan – “our city constitution.”  The proposal for the process was pitched to City Council in a 2-minute long public comment by resident Kate Disney.

Let’s recall that the aim of the 2018 Measure C was to amend the General Plan with language that would have required the City to hold a general election whenever a sale or lease or ‘significant’ change in use of “city-owned land” was proposed. Now in 2019 these Yes on C leaders are proposing that a citizen committee – recruited by their proposed process – be charged with revising/amending our city constitution. The process may mean that a majority of the proposed committee can be packed with Yes on Measure C sympathizers. They could constitute a majority vote to add the rejected Measure C language to our constitution..and to insert a lot of other stuff as well. Let’s recall that the Measure C amendment language was voted down 53% to 47% in the 2018 election.

Lalahpolitico: I guess the Yes on C folks didn’t like the 2018 election outcome. Are they thinking “Let’s start another process where we think we can omit important facts and dominate the conversation with the less-informed residents?”

Let’s recall that many volunteers of the 2018 Yes on C movement tricked (either on purpose or because of lack of training)  hundreds of citizens into signing the original “initiative petition.” They achieved this blazing fast signature gathering by lying by omission. They never mentioned to signers that Measure C could affect changes to existing city leases – e.g., Los Altos Stage – and affect the orderly acquisition of new and different tenants. They rarely mentioned that the affected lands included downtown Los Altos parking lots, not just parks. They never mentioned how this expensive, time-consuming plebiscite process tends to have the net effect of banning all land use change on all city-owned land. They never mentioned how such a de facto ban on land use change would “benefit” single-family homeowners who live adjacent or very near city-owned land. It benefits them by preventing any “intensification” in usage — one metric… car visits per day.  Measure C would have protected the “privacy” of single-family homeowners located at or near city-owned land. But it would have done so by limiting the future enjoyment of city-owned land and new city amenities by the broader community.

[Lalahpolitico: I don’t think ALL homeowners adjacent or near Los Altos city-owned land oppose city redevelopment of that land FOREVER.  But it feels like 75%+ do oppose it. Personally, I think anyone who buys property within a half-mile of ANY public facility – park, parking lot, police station, fire station,  public school, private school – should realize that over 20 or 30 years things could change. Ditto for churches.  These places can be sold.  These places can add services and end services. Hello, realism! Hello, property rights of the property owner!] [a representative land use plan, not Los Altos.] Who is going to set the land use policy for the City of Los Altos for the next couple of decades? The Yes on Measure C proponents? If you don’t like that…do something.

Convoluted Committee to Revise the General Plan their way

It is being proposed that areas/districts – aka ‘neighborhoods’ – be drawn across the city.  Perhaps the proponents already have devised a map to their liking?

Problem 1: this Districting process is very susceptible to political “gerrymandering.”  It is proposed that each area/district will democratically elect a representative or rather a “leader” to serve on the General Plan 2020 citizen committee.

Problem 2:  how is the election of each neighborhood “leader” to be carried out?  Lalahpolitico doubts the majority of City of Los Altos voters will approve of using the county election process to hold that kind of election:  Why? The cost is $150,000 for a general primary or November election, but as much as $500,000 to call a special election. It would be expensive, but at least people would trust there was probably no voter fraud.

And let us ask who is an eligible voter in this election process for choosing an area/neighborhood “leader”?  Any property owner?  Any resident even if a renter?  Anyone with a child in a school located within the City of Los Altos? Teresa Morris said, “I want all residents to be heard.”  Lalahpolitico:  ‘All’ is a very high bar, a unicorn goal perhaps?

How shall the election of the “leader” of each city “area” be conducted? It’s hard feel this could be trusted.

If the YES on Measure C folks say the  “eligible” voters must be property owners, and that they get one vote per property they own, then the City Staff can administer an election of “leaders” similar to how the city staff vets “single-family overlay districts.” The city charges single story overlay petitioners over $4000 to administer an overlay voting process. But this is for handling at most 100 properties, 100 voter ballots.  [Lalahpolitico:  I hope this fee is revised upward; this price hasn’t changed in over a decade.] But there are about 10,000 parcels in the City of Los Altos. So that type of election might cost the city $400,000 in staff or contractor time to administer.  [BTW, some of the Measure C leadership began their local political careers by leading single-story overlay campaigns on their block!] Can we trust this process?  Several city overlay elections have had big, big trust issues.

There are commercial companies that conduct stockholder voting elections and conduct fraternal organization board elections for a fee. Often the voting is 100% online. Lalahpolitico:  Should we trust these companies with the election of the citizen committee for the General Plan 2020 revision?  Hmmmm.

Then there is nextdoor.com.  The company has a process in place where online members can vote for this or that – like changes in the boundary of their nextdoor.com neighborhood, or changes to the name of their neighborhood.  Nextdoor also has some kind of “polling” application.  Maybe the Yes on C folks can just adopt the neighborhoods/area maps that are already set up on nextdoor.com!  Lalahpolitco: Ha, ha, you’ve got to be kidding me.  But I suspect the Yes on C proponents have a nextdoor.com agitprop plan in their strategy that can help them come to dominate City of Los Altos government. Who will shape our Los Altos land use planning for the next 20 years? Nimbys or Yimbys…or moderates in between those extremes?

SEEMING GOALS OF THE YES ON C CABAL?

Lalahpolitico: By “ reading  in between the lines” of Measure C proponent comments — and folks in the Lee-Eng / Enander fan club —  one can ascertain that the goals of the Yes on C cabal seem to include

2) advocating for a new police station bond in 2020 that would compete with and they apparently expect to kill a 2020 bond effort for a Main Library library expansion,

5) adding the Measure C ban on city leases to our city’s General Plan — the constitution – by dominating the General Plan 2020 revision process.

In the fall of 2018 Lalahpolitico had warned her readers about what unsavory goals two of the five 2018 city council candidates were likely to advocate. Sadly I was mostly correct.

Lalah’s 2018 predictions about where the five 2018 council candidates stood on the most important issues and initiatives in the city, including the community center project and the main library.

Lalah’s post explains what the city council did when faced with the Save Our Park initiative in the fall of 2018.  It pre-empted the alleged ‘need’ for it by voting 4 to 1 for an amendment to the General Plan to require a citizen vote when considering selling a park. The single No vote was Lynette Lee-Eng, who said it “didn’t go far enough,”  Formed in 1952, the City has never sold parkland, it has only acquired it.