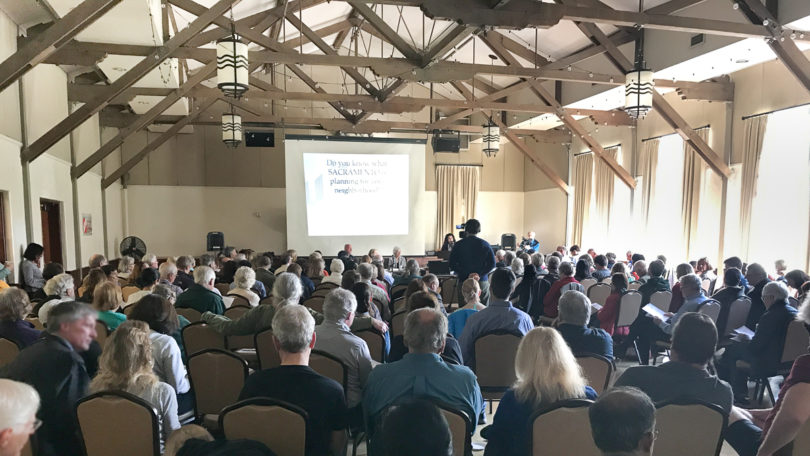 Up to 200 people showed up for the Liveable California seminar event about SB50 and other Sacramento Housing bills 2019.

Livable California – a grass-roots organization opposed to most State Housing bills – held a “town hall meeting” in Palo Alto on March 17, 2019.   The lead local sponsor was Palo Altans for Sensible Zoning. The audience of about 200 fully filled Lucie Stern Community ballroom. The panel discussion focused on SB50. This is the bill that mandates 45 and 55-foot tall housing buildings near ‘high-quality bus corridors”, and mandates higher residential density (upzoning)  in”transit rich” and  “jobs rich”  areas. The panel presented before & after slides of what the ill-effects of SB 50 will look like on five Palo Alto neighborhoods. In reaction to the 200 housing bills advancing in Sacramento this year, Livable California is planning to collect 1.3 million signatures for a ballot initiative. It would amend the state constitution to prevent state legislators from passing laws that reduce local control of land use zoning.

The bill is at a very early stage so definitions and amendments are TBD. But at this point, it seems that the entire area of the Cities of Palo Alto, Los Altos, Mountain View and beyond…are “jobs-rich” and a potential target for upzoning by the State! We will know more in April as the bills get fleshed out.  Then in September, we will learn how the bills end up in the legislature – shelved or passed into law. The townhall event presented this map from http://embarcaderoinsitutue.com. It suggests that every parcel in Palo may be a target for upzoning under proposed SB 50.

But the big, big news from the meeting is that Livable California is aiming to float a State Citizens’ Initiative for a future ballot. They need 5.5 million dollars and to collect 1.3 million signatures to succeed.

The Liveable California initiative would say something to the effect that ‘land use zoning is determined at the local level in California’. It would amend the State constitution. A slide shown at the townhall

What is the motivation for such an amendment to the constitution.? The Liveable California panel speakers were annoyed by the onslaught of state housing bills starting in 2016 and seem furious about the 200 different state bills in Sacramento now in 2019.   All are chipping away at local control of land use zoning. The definition of ‘local control’ seemed to vary among the panel. Dennis Richards of the San Francisco Planning Commission said he favors the possible formation of “some kind of regional jurisdiction” in the Bay Area.

Lalahpolitico: Presumably a new regional jurisdiction would take some control of land use zoning away from cities and counties. However, if it also would rationalize the patchwork of Bay Area infrastructure planning (now largely limited to major transportation routes and SF Bay conservation) by including it its scope our water supply, parks and schools, well,  that additional regionalization could be beneficial. A slide shown at the Livable California event. “Work for people, not profits.”

Lalahpolitico: Some supporters of Livable California are calling for “more regulation.”  If by that they mean addressing the jobs-housing imbalance by perhaps mandating limits on new office space, and by charging impact fees (sticks) on local mega-corporations, well that could be beneficial.  Perhaps there could also be incentives (carrots)  for mega-corporations to expand to beyond Interstate 680 or even further east.  West Virginia was one suggestion!

Other Bills that are Targeted for Opposition

This is the list Liveable California is asking people to oppose at this time. The bill short descriptions are their language, not mine.

Lalahpolitico: Yes, it overrides local planning in certain areas of a city, but apparently not the whole city.  This is the bill that mandates 45 and 55-foot tall housing buildings near ‘high-quality bus corridors”, and mandates higher residential density (upzoning)  in”transit rich” and  “jobs rich”  areas. Here is the current bill language attempting to define “jobs rich” areas.  They are now called ‘tracts’ …implying that only select R1 zoning tracts would be upzoned. An excerpt from the bill follows… Another slide is shown at the townhall. It calls for more regulation.

Lalahpolitico: Yes it prohibits moratoriums. “This bill SB330, until January 1, 2030, with respect to land where housing is an allowable use, would prohibit the legislative body of a county or city, defined to include the electorate exercising its local initiative or referendum power, in which specified conditions exist, from enacting an amendment to a general plan or adopting or amending any zoning ordinance that would have the effect of (A) changing the zoning classification of a parcel or parcels of property to a less intensive use or reducing the intensity of land use within an existing zoning district below what was allowed under the general plan land use designation and zoning ordinances of the county or city as in effect on January 1, 2018; (B) imposing a moratorium on housing development within all or a portion of the jurisdiction of the county or city, except as provided; (C) imposing design standards that are more costly than those in effect on January 1, 2019; or (D) establishing a maximum number of conditional use or other discretionary permits that the county or city will issue for the development of housing within all or a portion of the county or city, or otherwise imposing a cap on the number of housing units within or the population of the county or city. Livable California offers this diagnosis of the problem underregulation.

Lalahpolitico: This bill AB 68 Yes, Liveable California is correct that it does pinch Los Altos’s new ADU ordinance a little bit. Here is the key bill language. ‘This bill would prohibit an ordinance from imposing requirements on minimum lot size, lot coverage, or floor area ratio, and would prohibit an ordinance from establishing size requirements for accessory dwelling units that do not permit at least an 800 square feet unit of at least 16 feet in height to be constructed.’  Our ADU ordinance already permits 800 square feet and has no minimum lot size.

Lalahpolitico: However, with our current Los Altos ADU ordinance you can’t add the 800 square feet ADU  if you have already maxed out the parcel’s  lot coverage or floor area.

However, Los Altos ADU rules like setbacks, and not having a second front door would still prevail.  In contrast to Los Altos, many California cities enacted very restrictive ADU ordinances… like 400 square ft. maximum size …so this bill will bite hard if passed. Livable California also says income inequality is a root cause. Lalahpolitio: So Universal Basic Income… or what?

Lalahpolitico: This AB 725 bill would “prohibit more than 20% of a jurisdiction’s share of regional housing need for above moderate-income housing from being allocated to sites with zoning restricted to single-family development.”

From the City of Los Altos documents …’The City’s current RHNA is 477 total housing units across all income levels, which includes: 97 ‘above moderate-income units’. That means that between the years 2015 and 2023, Los Altos would need to have about 80 market-rate units in duplexes….townhomes…or high-rises.  Well, thanks to the high-rises on El Camino, the city will probably make that quota. Liveable California calling this an “attack on single-family homes” seems unfair. Livable California presented 5 pairs of BEFORE and AFTER renderings of potential SB 50 developments for selected Palo Alto locations. See the map for the selected 5 locations. This is the Baptist Church.

Lalahpolitico: I think the Liveable California group has a made typo in the bill number AB1487.  ‘Section 65584 of the Government Code..requires the Department of Housing and Community Development (HCD)  to determine the existing and projected need for housing for each region, as specified. But this is the RHNA quota process and has been going on for years and years!? After SB 50…a Palo Alto Baptist church could be next to a multistory multifamily building.

The Town Hall was videoed by Mid-Peninsula Media Center.  The video will probably be broadcast and streamed and perhaps make its way to Youtube.  But I don’t have that info as of publication. If anyone has it, please let me know and I will update this page.

Other websites listed by the Town Hall organizers

Our Prior Article on MTC, ABAG, CASA and SB50 A nice little bungalow house in Palo Alto before SB 50….

After SB 50 the bungalow could have tall neighbors. SB 50 permits aggregation of parcels, something that is not normally not done in R1, single family home zones.

There is definitely some fear-mongering going on on the part of Livable California.  But honestly, how else can you get people’s attention.  It is true that Sacramento does want to see bigger buildings next to some tracts of single family homes. Their rendering for before and after SB-50 do not lie. Mixing up housing densities – SFH, duplexes, 8-plexes, and larger — in the same zone,  is called zoning for the “missing middle.” But the fact is that SB 50 does not target the whole of Palo Alto.  The entire beige area of single family homes in the map above will NOT be upzoned  The bill says “tracts” will be identified by HCD in a TBD manner.  So large swaths of Palo Alto will remain pure, homogenous, single family home (SFH)  areas with some ADUs. But the uncertainty about exactly which SFH tracts will be targeted is surely making all homeowners stomachs churn. And homeowners who would be affected by SB 50 or similar bills that might pass some year…need to be compensated.  California needs more missing middle housing, Palo Alto needs more of it and Los Altos needs more or it, etc.  But SB 50 and a pile of  200 bills seems like a poor way to go about it. This is very poor ‘community engagement.’  The cart is way before the horse.

And as for the Livable California initiative to place a constitutional amendment on a future ballot to prevent the state legislature from every passing a law affecting land use...let’s just wait and see the language. Info table at Livable California event in Palo Alto March 17, 2019. Notice the renderings of what Facebook, Google and Apple campuses would look like IF they housed all their local employees on the premises. Many, many high rises….but Google is actually going that direction. Life imitates art!.