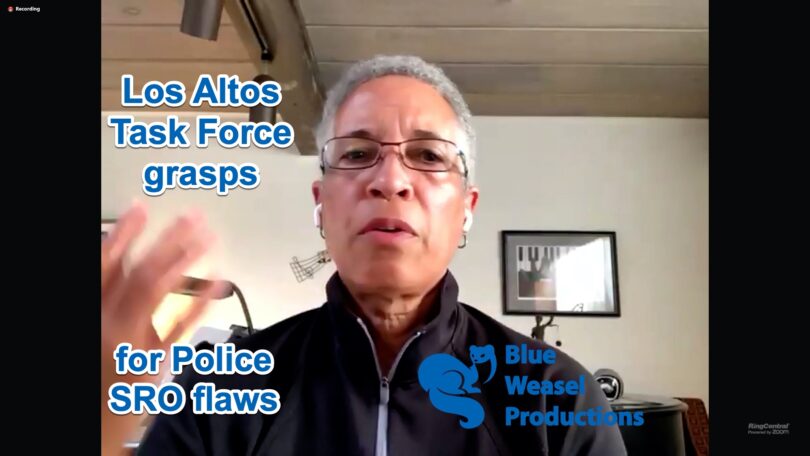 The first meeting of the Los ALtos Black Lives Matter BLM task force Oct. 14, 2020 solved the perplexing mystery of why LAHS students at the fact-finding Townhall July 28 complained that ‘police always seemed to be around campus.’ Police ARE around, but not who, what, where you think.

The first meeting of the Black Lives Matter BLM task force Oct. 14, 2020 solved the perplexing mystery of why LAHS student at the fact-finding Townhall July 28 complained that ‘police always seemed to be around.’  {Video of Townhall July 28 }

The SRO provides services – mostly educational presentations – to 16 public and private schools within the borders of the City of Los Altos and is stretched thin she said. Three years ago LAHS administration was asking LAPD if it could add a 2nd SRO. LAPD does not have the funding to do so.

Krauss said that the purpose of the SRO program is to intervene with at-risk youths to divert them from falling into the justice system, in other words, to “keep them on a better path.”

Krauss explained that neither the  SRO nor the police department provide “security services” to LAHS. The school has one maybe two private security guards who wear plain clothes, are not armed, and may drive around in golf cart type vehicles.

In all the above cases, the school administration knows that police are making a visit.

The uniformed LAPD go to campus only when they have received a “call for service.” The have NO “self-intiated” visits. LosAltosPolitico:  Wow, no wonder some LAHS students feel policed.  Do they also think the private security guard on campus is actually a SRO? Kind of funny to “pin it” all on the LAPD SRO, isn’t it?  What are they learning in civics class?

The most concerning thing I heard at this BLM task force meeting is that – per Capt. Katie Krauss – the LAPD was shocked that the two teachers with ‘stories and concerns’ at the Town Hall never communicated about that to the LAPD.  Did those teachers at least report up to the administration and school counselors?  We can understand why the kids may’ve been hanging back from complaining. Those uniforms, that gun! But teachers? The grown-ups! Let’s fix that broken channel of communication.

Los Altos Town Crier has a good summary of the Oct. 14 meeting that highlights things this article did not. Why would LALAH be repetitive?

FYI: The scope of the BLM task force is LIMITED to investigating two things. 1) the police School Resource Officer program at Los Altos High School, 2) the Los Altos Police Department Complaints process. Los Altos is not doing anything as vast a reform as large cities like Portland are attempting.

Instead the Council held a Townhall first on July 28. But now we are at the Task Force stage.