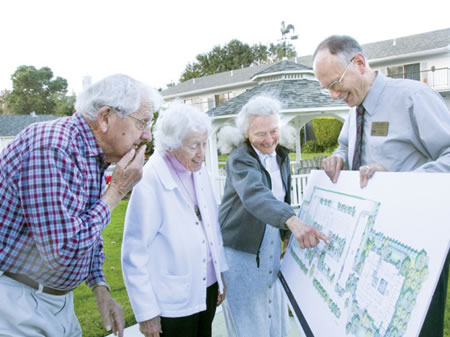 Neighbors of  Terraces Los Altos, many of whom opposed the rebuild of the senior housing, can take some comfort that the noise and traffic will be limited to 39 months. Three months of sidewalk work could start in January.  Actual project construction is anticipated for March or April, 2012. Happily, excavation for the underground parking garage will happen all at once (previously planned for two phases). Those are the highlights of a project report that was presented to the Los Altos City Council December 13, 2011.

On August 11, 2009, the City Council approved a development application for a new continuing care retirement facility at 323 and 373 Pine Lane. The Terraces of Los Altos (formerly known as Pilgrim Haven) received approval to demolish many of the facility’s existing structures and replace them with new two- and three-story buildings that include independent living units, assisted living units, skilled nursing beds, a memory support facility and an underground parking garage. The neighbors on Pine Lane are lucky they got advance notice of the plan. They can arrange to take a foreign assignment for a few years and rent their places. The firm has promised to keep 400 homeowners and Santa Rita School informed about the construction timeline with a newsletter and hotline.

That’s not typical. Did you know that if a neighboring property owner has a conforming single story plan, you won’t necessarily know of it till the wrecking crew arrives? No notice of such plans is required. Notice of owners within 500 feet only occurs for plans of two-stories or with variances. Did you know that construction and remodeling permits allow work to start at 7 am?  However, landscape maintenance and handyman work is restricted to starting at 8 am.  A Moment of Truthiness – a next door owner  recently took 24 months to rebuild, expand and flip the house.  Oh, how we loved that 7:30 am wakeup call.  (When we asked the foreman about the 8 am restriction, he told us the permit allowed them to start at 7 am.  He added that he had never seen anything like that in other cities.