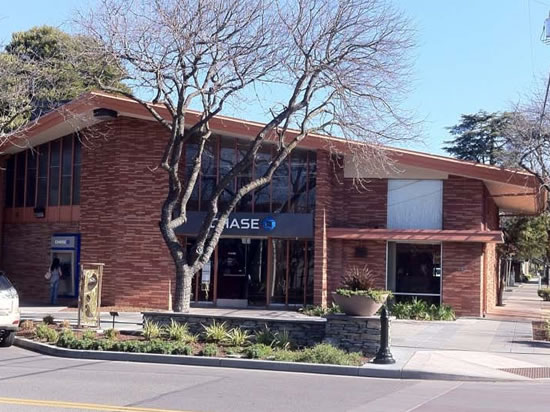 Chase could get booted off of Main Street

Los Altos City Council could approve creation of an ad hoc committee to consider giving downtown banks  and other owners of “wide, bulky, windowless buildings” the boot in order to achieve “contiguous retail” on Main and State between 3rd Street and San Antonio Road.  “Amortization” of  downtown buildings which have non-conforming uses (not retail sales) seems to include banks, the Masonic Building, the Costume Bank and perhaps others. The germination of the process could begin at Tuesday’s March 13 council meeting, 7:30 pm.

Resource: The official City of Los Altos attachment is here.

In 1988 the Los Altos City Council revised its zoning ordinances such that banks and other non-retail uses on the street level were not a permitted use within the downtown “Commericial Retail Sales” or CRS zone.  The purpose was to “minimize blank walls, to continue the fine-grain pattern…underlying the 25-foot frontages originally established” along the two blocks of Main and State extending from First to Third.

Shopper Habits – Quarter to Half-mile is the Maximum Walk

Packard and Fishpaw have written a Memorandum which details a great deal of research demostrating that “shoppers will walk about a quarter mile if it interesting.  This length can be extend to one-half mile if it is really interesting with activity, windows, shops, art and so on.”  They point out that the Main street  is .4 mile long from Foothill to San Antonio.  Furthermore studies show that corners are of special importance.  “Buildings on busy street corners that are designed to accomodate shops, restaurants and other similar activities can contribute to local identity and activity.   Further more they cite…

“Huge virtually windowless buildings, however, are the antithesis of place making and can spell doom for a pedestrian-oriented town.” This bank could also get booted off of Main Street

The amortization process involves giving notice that the owner must cease the non-conforming use, often within 3 years, and remove the building.  Fishpaw and Packard report that California courts have upheld most amoritization period if they appear to have a reasonable basis in objective research and data-gathering.  They are arguing that the retail banking business has changed and large locations are unnecessary to the industry.

The memo stresses this is just research at this stage. “Notwithstanding all these negative aspects of non-conforming uses, the Los Altos City Council is not being asked to make any pre-judgment at this time. In fact, the recommendation of the Contiguous Retail Committee may be that certain non-conforming uses and/or buildings are such a positive factor to the vitality of our downtown that no amortization would be appropriate. The role of the Committee will be to consider alternatives, possibly hold one or more public hearings or forums, and make a recommendation to the City Council for its consideration.” Forecast: Suppose the research process gives a green light. We expect that the two banks at the corners of Main and Third will definitely get the amortization letter. But at the San Antonio end, Wells Fargo and Citibank have been especially good neightbors and could escape having to make big changes. We don’t know who owns the land underneath these four banks.  Whoever does, we could see the buildings being remodeled or replaced to have street retail, but with several ATMs at each location.  There is an issue of merchant cash deposits, but probably most revenue is on credit cards.

Possible Future: Street Level Retail but with lots of ATMS

Masonic Temple might escape having to make changes to its building by arguing that they are a “positive factor to the vitality.”  The ad hoc committee will probably find a way to help the Costume Bank find a new home, so that a new snazzy structure could go in at State and Third.  Across the street the big, bulky building that used to house Linden Tree Books, a furniture store, and Beausejour seems to have shed its key tenants, and might be getting ready for a remodel.  Perhaps they are going to voluntarily “get with the program” of 25-foot contiguous retail without being pushed by the City.

As this Ad-Hoc Continuous Retail Committee moves forward, we expect the downtown parking financing study to also move forward.  All this increases pressure for measures like pay parking and parking structures.

Bottom Line: Yes, it sure would be nice to have Los Altos City Council “enforce” contiguous retail on these two blocks of Main and State Streets – like a shopping mall owner can. This proposed amortization process would all be a lot easier with the “carrot” of more economically viable zoning in the core downtown CRS (real 3 story without so many caveats), than just the “stick” of a threatened amortization action.  If it were highly profitable to replace the bank buildings, it would have already occurred.  We don’t like coercing folks into real estate development that doesn’t have an adequate return on investment or a quasi-forced sale.

The results of contiguous retail would be great. But the incentives “carrot” of  revised zoning for profitable redevelopment would be better than this “stick” coercing owners to redevelop on the City’s time table.

Resource: The official City of Los Altos attachment is here.