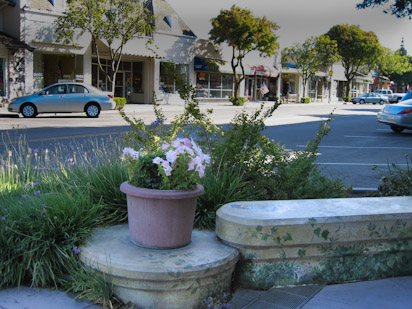 UPDATE March 7, 2012 : We received info from a Los Altos citizen that the spending on this project is more like $5.3 Million. See the anonymous contributor’s tally here in pdf format.

Los Altos Politico asks, “Are the new crosswalks, plantings, sculptures and other eye candy worth the money?  Recently Los Altos Town Crier asked if they were worth the time and hassle. In its February 22 issue it reported results of its poll: “The Los Altos downtown street improvements have been” a) Great 27% b) Terrible 25% c) Good, but took too long 24% d) so-so but not worth the hassle 24%.  (There were a total of 224 votes cast online).

So half the opinions were positive, half were negative.
Would opinions be even more negative if you told people the price tag?

By consulting the recent mid-year report on City of Los Altos Capital Improvement Projects (CIP), we learned that as of December 31, 2011, the city had expended $3.374 million on Downtown Streetscape and Intersection Improvements.

The main beneficiaries are, after all, the downtown property-owners.
Shouldn’t they be paying for most of the work?

Residential property owners routinely get hit with “special benefit” special district assessments.  Around 1990 the soundwall along Foothill by San Antonio (along Lincoln) was assessed on a special district of 4 blocks of homes which were deemed to benefit from the sound abatement. Also in the 1990‘s Raymundo and Avalon residences were hit by gutter and curb assessments to install concrete rain gutters which despoiled their “semi-rural” character. [There were no localized stormwater problems experienced by the residents, and no one asked for curbs.]  We aren’t sure what benefit the Raymundo –  Avalon homes obtained, except loss of their semi-rural character.

We are mystified as to why the city paid for $3.4 million worth of nice-looking but unnecessary changes to Main and State Streets in Los Altos downtown. Do you feel safer on the now more cluttered sidewalks? Watch out, don’t trip on that! Do you feel safer walking around the obstacles at every corner that force you to cross towards the center of the intersection?

Do you feel any safer walking or biking downtown?

As Larry Gardner points out in his Town Crier “Other Voices” column in the Feb. 29 issue, the changes have actually made biking into downtown Los Altos less safe.  Plus he points out several car congestion issues caused by changes to First and Main.

Clearly the city should pay for public safety improvements. But why should taxpayers pay for cosmetic changes?  If a super-majority of the merchants and property owners wanted these changes, they would arrange for a special assessment district.  Essentially, private malls internalize such improvements, so should downtown property owners.

With continued antiquated zoning codes for downtown, property owners can’t undertake profitable redevelopment. So the city hopes to make them feel better by giving them this do-nothing eye-candy. But It’s going to take relaxation of our growth-suppressing zoning and elimination of the grandmotherly storefront “look and feel “guidelines. That will make the city look contemporary, compete with nearby commercial districts, and attract people with money in their pocket.

From the December 31, 2011 report on Capital Improvement Projects (CIP), page 2 of the attachments, we get the $3.374 million in spending on downtown Main and State.

A related topic is the undergrounding of utilities on First Street.  This is necessary for the several projects along Foothill and First Street.  Arguably, permit fees and future retail sales tax revenue may cover this project which seems like a bona fide investment. As of December 31, 2011, the city had expended only $150,000. Any cost shifting here?