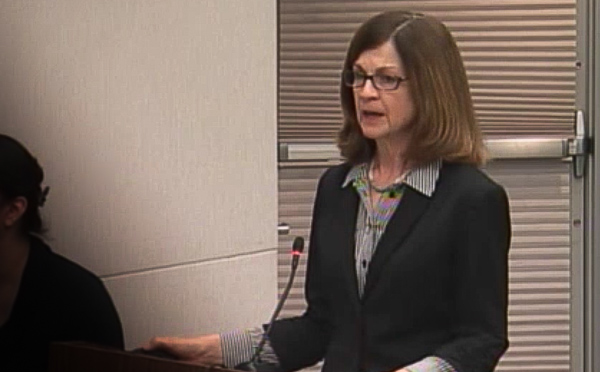 Jan. 13, 2015 – Council unanimously [4-0] approved  directing architect Pamela Andersen-Brulee (ABA)  to prepare a visualization “rendering” and final site plan placing a new Community Center and new pool along Hillview Avenue. This would be an update to the 2009 Facilities Master Plan and is the final step in ABA’s year-long existing project planning contract with the City.  The final ABA deliverables will be used by the council to “sell the project” to voters and potential partners like the City of Los Altos Hills.  Several council members questioned whether the site plan’s 160 net new parking spots were adequate to service the expanded amenities – a 55,000 square foot center and a pool facility. After the Council saw Pamela’s ABA slide presentation and listened to public commenters – including Kim Cranston suggesting the city wait for the creation of a Specific Plan or Precise Plan for the downtown – Jean Mordo opened the council discussion.

The first question,” Mordo intoned, “is whether or not having a specific plan is something we should wait for.  In an ideal world we might wait. But we’ve been waiting for it a long time.  A generation of kids has grown up and grown old.  Maybe it’s a little suboptimal, but as for me, I think we should move ahead. The second question is how are we going to pay for it? Council member Megan Satterlee liked the design concept just fine, but worried about whether it was fully parked and also about how to pay for the project. Later she abstained from the {4-0} vote to move forward with this $70M site concept without answers to her questions..

No councilperson spoke FOR waiting for a Precise Downtown Plan.  However, Megan Satterlee felt that the parking adequacy and the budget should be much more firmly established before proceeding.

“Why finalize a plan I can’t pay for?” asked Megan Satterlee text

Marcia Somers, City Manager, wanted to set expectations about the final  ABA deliverables on this contract.  Architect Pamela Andersen-Brulee explained that there would be “ONE beautiful visualization” of the the way the Community Center and pool could look for the “final” site plan.  With the rendering, she will share how she “sees it in her head.” And if there were to be a desire by the city to explore “phasing” the construction, the city had a right to go back to the cost estimator and get those estimates.  However, she warned that construction phasing would raise costs and that the underground parking and the building on top of that had to be done as a unit. The CORE CONCEPT with FIELD LOCATION OPTION A ( underground parking, mostly one story) with field configured as above (Soccer rather than baseball behind the History Museum) was extolled by the architect as having the best emergency vehicle access. See Red Line. It is also possible to flip the locations of the baseball and soccer fields.

Putting the budget constraint aside, all council members preferred site option A for the Los Altos Civic Center project. This site plan has underground parking under an a L-shaped community center that  is about 50% one-story and ~50% 2-story. However option B – which has a multistory parking structure next to a L-shaped 100% 2-story community center would be $7M+ cheaper, but significantly reduce open space; its emergency vehicle access was yet to be determined. Both plans allow the current theater  to remain in its current place until it can be rebuilt at the same location or elsewhere. CORE SITE OPTION B (was a parking structure behind Alan Pinel and a 100% 2-story community center building. This was not preferred by council. It is $7M less expensive.

In order to help “sell” the Community Center/Pool project to voters, Mordo hoped the ABA deliverables would include a general vision for the whole 18 acre-site, not just the SE half along Hillview Ave.  At the October 2014 charrette with the 4 architect teams  – Blue, Green, Purple, Orange – all teams explored the whole 18-acre site, even though their “solutions” were constrained by a prior council decision to keep the new community center-pool complex along Hillview Ave.  At the Jan. 13 meeting, all council members agreed the Green team sketch was a favorite approach to the NW half of the Civic Center.  Satterlee reminded everyone that that half of the civic center  – police, city hall, library, etc. – is NOT being planned for at this time and involves some contentious issues. For example, should the police building be larger, or moved? In October 2014 four architectural teams whipped up concepts for the civic center. They were contrained to locate the Community Center/pool complex along Hillview. This Green Team sketch – with its bike-pedestrian “Alley of Trees” connecting West and Each Edith – was admired by all council members. Note: this Green sketch is just brainstorming, nothing official.

In the Green team sketch, Council member Mary Prochow singled out for praise the tree-line pedestrian/bike walk that would connect East Edith and West Edith. She said, “This ‘Tree Alley,’ or tree promenade as I would prefer to call it, is the prettiest connection to downtown I’ve ever seen.”

This ‘Tree Alley,’ or tree promenade as I would prefer to call it, is the prettiest connection to downtown I’ve ever seen.

How to pay for it?

Jean Mordo  suggested it would be possible to “let the voters make the final trade off between costs and open space.”  This could be accomplished by putting two bond measures before the voters  – one for the project plan with more expensive underground parking and the other for a version of the project with a cheaper parking structure.  He explained this two bond approach was how the North County Library Authority was first established: in order for Los Altos and Los Altos Hills residents to tax themselves MORE than the rest of the county, so that our two libraries could have longer hours of operation.

Is this Plan Fully Parked?

Architect Pamela Andersen-Brulee reminded council that several months ago the prior council had received an ABA presentation with a detailed parking analysis. It showed that with the 55,000 square foot community center and a pool,  parking requirements were more like 375, rather than the 300 included in Option A and Option B.  She said that at that time, that council did not make a final decision to go with the higher number nor to initiate a contract extension for  planning for parking changes in the NW half of the civic center.  Megan Satterlee complained that parking in that north by the police would be too far away to be useful and would  make using the pool and community center a negative experience. The architect said that the year-long public and stakeholder input plus the ideas of the 4 architect teams, suggested these consistent elements for  the $70M  Site Design. Construction is from ~$45M to ~$55M. But additional project costs such as “contingency” push the project cost to almost $70M.  Note: these are estimates, not bids based on detailed blueprints.

So far the parking in the NW section — for the City Hall, the police and the library — is not being changed, increased or moved.  However the History Museum and theatre may lose a few parking spaces because of the Community Center/Pool Option A site plan. The planned vehicle circulation will dead-end in a turning circle located in between the museum and theatre. There will be no driving through to Hillview. Instead there will be a wide pedestrian only plaza-like area seamlessly connecting pedestrian flow from the History Museum to the Theatre and new Community Center.

Mike McTighue, a planning commissioner commenting as a private resident, asked council to consider how removing those several parking spots might impact the History Musuem’s event catering.  “There is a wedding there practically every week.” Trucks need to be close to unload and load.

Relax: This is just the final deliverable of a CONTRACT

City Council had to pick a “core site plan” so that ABA could deliver the final item in their site planning contract.  The City Council was on the hook to “perform” by “giving clear direction,” and the City is on the hook to make the final payment on the contract.  The City might as well obtain some nice-looking materials it can use to present a defined  community center concept to the likely voters and our potential partner, the Town of Los Altos Hills. Lalahpolitico likes Mordo’s idea of letting the voters make the trade-off between a cheaper site plan with a parking structure versus a $7M costlier site plan with underground parking.

Support for stopping or slowing the planning for a Community Center/Pool project seems too weak.  The key factions who seem to want to stop it are 1) frugal taxpayers who do want a new center, but certainly not one twice the size and twice the cost,  2) downtown property owners and downtown residing seniors who both prefer a new community center fronting on San Antonio Road to create “vibrancy” for them.

Lalahpolitico:  Mordo probably expresses the dominant public mood at the moment.  Yeah, it may be “suboptimal” to leave the community center located along Hillview Ave. rather than San Antonio. But the cost and delay of doing otherwise makes us say, “Don’t let the perfect be the enemy of the good.” Interest rates for borrowing are nice and low now, why keep churning?  And this project is a long way from being baked. Let the city council go out and try to “sell it” to the public. Let’s see if they can win the hearts and minds of “likely voters.”  Sixty – seven percent of them!