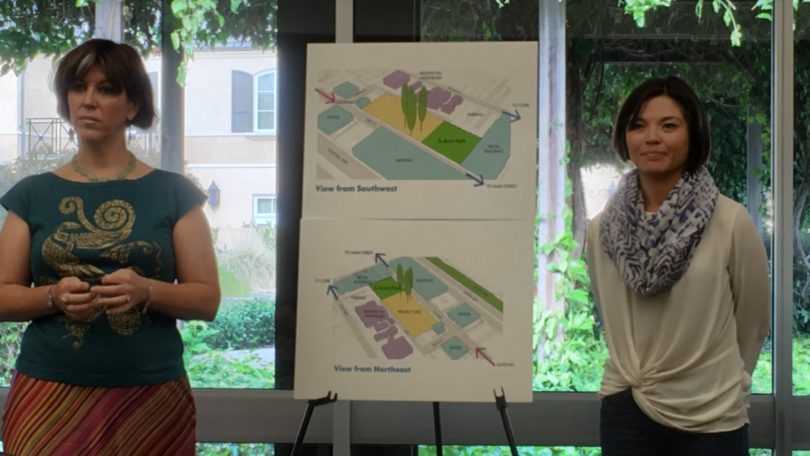 Downtown Los Altos property owner —Los Altos Community Investments [ LACI, formerly Passarelle] — is thinking about how to make its popular downtown  summer “Greens” concept permanent.  LACI owns 16 to 18 parcels downtown including 7 small contiguous parcels along the eastside First Street, running from the vacant Vault, through Bumble Restaurant on to the Area 51 Gaming arcade.  It wants to revitalize or rebuild these 7 “underutilized and underperforming” First Street properties as professional offices or mixed use and to include plenty of underground parking. Proposed .5 acre park on Parking Plaza 7, view from Southwest. Yellow is the site of LACI’s First Street Project, a renewal of 7 parcels.

The “big idea” is that LACI would like to parter with the City to turn half of Los Altos Parking Plaza 7 into a permanent park, and extend their revitalization project’s possible underground parking UNDER THE PARK as well. Kelly Snider, CEO of LACI, promises that there would be at minimum a one-to-one replacement of the public surface stalls in the underground parking.  In other words, no loss of public parking spaces. The  pedestrian experience of the Safeway, when standing across the street, is not so monotonous as when next to it. At a distance, there is a feeling of some architectural articulation.

Snider considers the new Safeway a success in many ways. “It’s a great use, it’s doing well financially, and it provided some parking to the downtown. Although some people feel differently about the design of the actual building, the new Safeway definitely improved the streetscape. It’s going to be here a long, long time.”  Lalahpolitico: yes, it’s LACI’s 7  properties on First Street that are the remaining eyesore in this north stretch of First Street. View of proposed park on Plaza 9 from the Northeast. Yellow is the LACI First Street Project site, a revitalization of 7 parcels

The yearly temporary “Greens” have been a great success for the past 5 years according to LACI.  People tell LACI staff, “We loved the programming, we loved having a place to connect, we loved having a place to sit and eat our lunches…”  About 20% of the Green time has been programmed, while the rest has been left unprogrammed for “organic” or spontaneous use.  On Facebook the Greens page reportedly has 20,000 viewers.  LACI believes there is a real need/demand for this park concept in the center of town.  People tell them, “Yes, here in downtown we have a couple of cute coffee shops and a couple of tiny, cute plazas…but there is nothing in the center of town that has a little more breathing room to it…something that allows people to congregate…”

Kelly Snider floated this concept of a Los Altos Plaza 7 park to a group of ~30 people at the Aug. 19, 2016 meeting of the Los Altos Community Coalition [LACC].  LACC is a group of several local organizations and includes a fair number of downtown property owners in its ranks; it is advocating a joint “visioning” of the downtown and the City Community Center 18 acres…at the same time. However the City is pursuing a visioning of the downtown with ” a connection to the City Community Center 18 acres.”  Not the quite the same thing, eh? Some of the regulars at the Aug. 19 LACC meeting, plus the new City Community Development Director – Mr. John Bigge – seated on the far left.

The LACI idea for a Los Altos Plaza 7 park was well-received on Aug. 19 by the “usual suspects” who volunteer for LACC and attend its meetings. One person said that underground parking in downtown Los Gatos helped that downtown survive the competition from Santana Row. Another person suggested that the LACI proposed park be extended to cover not just half of Plaza 7, but the entire thing.

There was some attendee back and forth about whether more offices downtown was a good thing or not. One camp seemed worried that the growing trend to high-density offices, with lots of employees per square foot would become the norm downtown.  That could stress the plazas and cause traffic congestion. The other camp claimed that kind of employee density only happens for office buildings next to train stations, …and “unless Foothill Expressway is going to be rebuilt with track again, our downtown won’t be seeing that kind of office density”.  Instead, this camp claimed that low-density professional offices are what is in demand for our downtown. “Think venture capitalists.” Snider said LACI just rented 3000 sq. feet space to a 4 person firm and a 1800 sq. ft. suite to a 6 person firm. The City’s new Community Development Manager – Jon Biggs – thanked Snider for reaching out to the City so early in the project ideation process…way before submitting a project application.  Snider said that LACI wants the City staff to discuss with them what kinds of ingress and egress at their project were possible, what kinds of parking requirements would be needed for various kinds of project concepts and uses for its “First Street Project”.

Kelly Snider went on to introduce consultants LACI has hired from the Sares-Regis Group, a well-known property management/investment group. These folks will be talking to downtown stakeholders and also to residents too. They want to hear what people want now, how they want the downtown to evolve in 30, 50 and 80 years.

Snider said the Sares-Regis outreach/research and LACI’s  feasibility studies might take over a year.  Only after that would an architect start to suggest designs and plans.

REFLECTIONS: Our Chance for a Park

LALAHPOLITICO: Back in 2011 – 2012, Passarelle was trying to buy the City’s land at 400 Main and also to buy the old Safeway, aggregating those parcels.  Neither of these parcels belong to the Shared Downtown Plaza Parking arrangement, which the rest of Main and State belong to. The 2012 Passarelle project on First Street would have been a mega  retail or mixed use project with up to 2 levels of underground parking running under the whole thing along First Street, much of it public parking. in 2011…Passarelle might have aggregated First Street Los Altos parcels colored yellow, orange (safeway), red and purple. It might have been ground floor retail…with underground parking under the whole area…permitting some City owned parking plazas to be converted to parks and bike paths

With an increased supply of public parking underground, the existing public plaza surface parking behind Pete’s coffee and Skip’s pizza could have become a little green City park instead of asphalt. Perhaps this park could have stretched all the way down the lots behind Cranberry Scoop and the Costume Bank…all the way to behind Citibank. This was the charming park / biking path concept floated by Green Town Los Altos back in 2010.

But that Passarelle purchase didn’t happen in 2012-2011. Fortunately, it seems there is now a second chance to get some permanent green park downtown…this time on Los Altos Plaza 7. That would certainly be way, way better for Los Altos Plaza 7 than that the recent idea floated by the Chamber of Commerce  and former Mayor Ron Packard — an ugly parking structure on Plaza 7.  50% of the construction cost would have been paid by downtown owners; 50% by you and me, the resident property tax payers.[Humph!]  Packard eventually graciously admitted that his own wife had leveled with him, telling him the structure was a terrible blight of an idea. It was dropped. Thank you Mrs. Packard. Map of location of the proposal for a Los Altos Plaza 7  .5 acre park and a LACI First Street Project