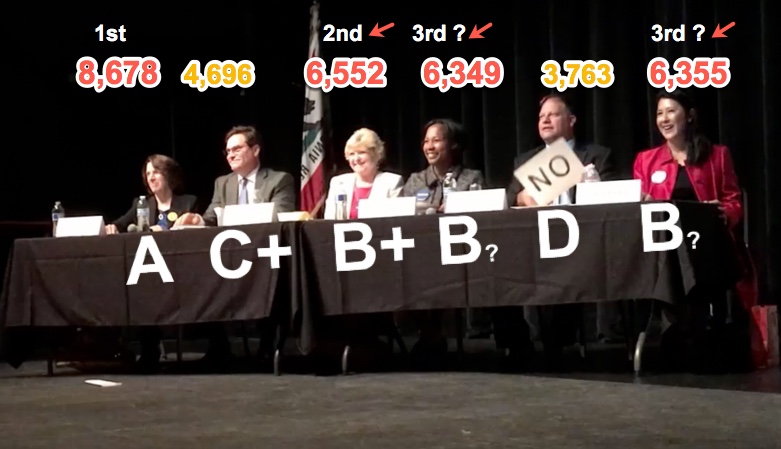 Dateline Dec. 13, 2016 — Santa Clara County election results were “certified” Dec. 8 as is required by State law.  But for the County’s 10 close elections — including the Los Altos City Council election —  this Dec. 5 press release explains that the recounts are going to be continuing beyond Dec. 8…for an unspecified time. It does specify that when the post-certification recount is finally done, if it comes up with different winners, those would be certified [later]…as specified in Elections Code 15610!

So it seems that only Santa Clara races that are 100% machine tabulated are really certified with 100% certitude as of Dec. 8.

Stick with City Custom or…
Wait for 100% Certainty of Vote

The City has a long-standing custom of swearing in new council persons in December and having its “reorg” meeting in December to “select” the new mayor and mayor pro temp. It hosts a “party” to welcome new members and recognize termed-out members. The City was trying to do this business at the customary time of year, hence these activities were scheduled for this evening, Dec. 13, 2016. But over the past few days, it has dawned on City Manager Chris Jordan and several council persons, that there is a non-zero possibility that a swearing-in of a new council member could need to be reversed by the ultimate results of the continuing election recount process. [What happens in case of a tie? TBD.]

Lalahpolitico agrees that unseating a new councilperson 2 or 3 weeks from now would be way more awkward that just waiting to do the swearing in and reorg in January. Actually most cities do these activities in January. Also there is no pending City business that will be harmed by skipping the December council meeting tonight. These agenda items can be addressed at the first council meeting in January, on the tenth, or thereafter.

Of course, everyone is hoping that the Registrar gets done with our Los Altos City Council election recount in the next week…before high holy days! The affected candidates – Lynette Lee Eng and Neysa Fligor – certainly will enjoy their winter holiday more if an outcome is FINALIZED with 100% certainty sooner than later.  And their families, friends and supporters also hope for a FINAL outcome.  This not knowing is hellish, isnt’ it?

And this is the first time the Registrar is facing this “pilot program” of County-funded automatic recounts.  Apparently, Supervisor Joe Simitian – who launched this pilot program – has noted wryly that “some fine-tuning” may be required in the future. October 2016 forecast…Only one candidate is a definite NO vote. He’s got the sign. And voters in Nov. 2016 placed him last.

Yup. I pretty much I nailed it. [ Look at the photo of my “forecast” / recommendtion above. And here’s what I wrote about the Los Altos City Council Election back in October.]

Well OK, I admit to just 95% nailing it. Incumbent Jan Pepper did even better than I thought…voters seemed to give her an A, better than my A-.  And incumbent Jeannie Bruins got marked down by voters to a B+, whereas I thought she could pull an A-.  [ In second, place Bruins is beating out third place only by 200 votes. Ouch.] And in October,  I believed both Lynette Lee Eng and Neysa Fligor would be equally attractive…to somewhat different but large constituencies of voters. And I was right.  I gave them both B, and with them now appearing only 5 votes apart, voters seemed as indecisive as Lalahpolitico about who should replace outgoing Megan Satterlee.  As expected by me, Alex Glew and Steve Smiley trailed in the voting.  Alex appears to be gaining some recognition for his repeated runs for council; he finished a strong fifth almost 100 votes ahead of Steve. Steve won a few more hearts than I expected.

In 2016 there were 4 attractive council candidates and only 3 council slots. It was bound to be a nail biter.

Preliminary precinct analysis of the Los Altos City Council election shows the expected pattern of variation in support from northern to southern precincts. A candidate’s home precinct tends to give them first place.  Lalahpolitico hopes to sift through the results in more detail at a precinct level in a future post.  Participation in these down ballot elections like council and school board is even lower than I had thought.