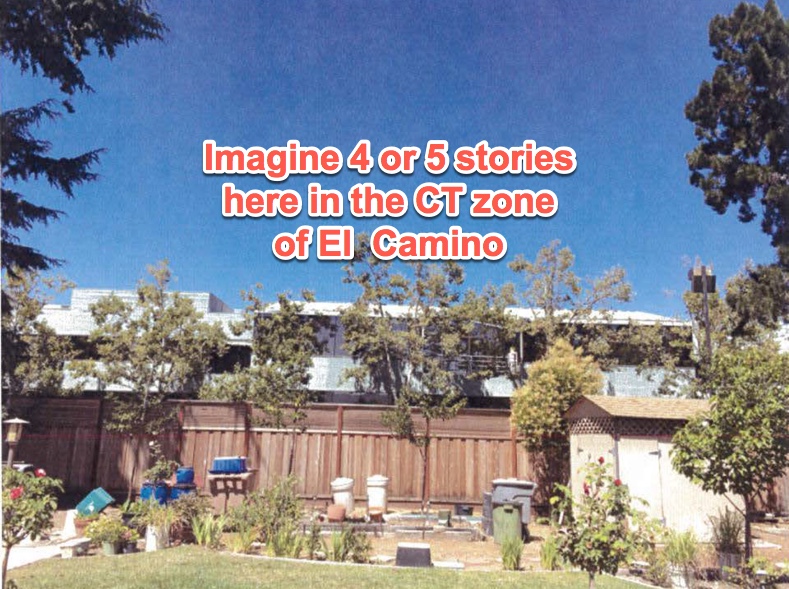 The CT and Density Bonus ordinances will try to protect R zone privacy...

UPDATE Aug. 6, 2017:
At the Aug.3, 2017 meeting, the PTC decided to “continue” both the CT ordinance and the Density Bonus ordinance to a future meeting. In other words, no action was taken. Decision making has been delayed in order to 1) have the City Attorney attend a future PTC meeting to address commission members concerns about the letter from a State Dept. of Housing… an official who objects to numerous provisions of the City’s proposed Density Bonus ordinance, and 2) to allow staff some time to create a brand new ordinance [or ordinance amendment] that would establish a “BMR-in-lieu” fee schedule.

Most surrounding cities have such a BMR fee program. City Council member Jean Mordo has reminded the PTC and residents that the Downtown Economics consultant stated that many developers will chose to pay a BMR-in-lieu feed instead of constructing BMR units. Thus the CT zone and Density Bonus are being held back until an BMR-in-lieu program can be drafted and adopted simultaneously.

The City’s Community Development Director Mr. Biggs said that document research has found the rear Loucks parcel of Village Court is zoned R1-10, not CT. It is for small multifamily projects of 10 units per acre. Adjacent neighbors must be breathing a sign of relief.

First, the rules for the Commercial Thoroughfare (CT) zone along El Camino are being enhanced in reaction to the”shocking”  5-story 4880 El Camino project which was somewhat reluctantly approved by the City last summer.  4880 El Camino was the first project in Los Altos to ever ‘exploit’ the State Density Bonus law. And although there has been a State Density bonus law designed to produce a bit of “Affordable Housing” since 2007, at that time the City chose to simply rely on the language of the State law, rather than craft its own version of the law. That has changed. The new City of Los Altos Density Bonus law is modeled on that of the City of Los Angeles, but has a few unique twists. R-1 single family home residents at Rilma and Loucks say this circled parcel at Village Court is actually R-1, with stringent height covenant restrictions, not CT!  Even if it is CT, the new Los Altos CT zoning ordinance provides side yards the same setback as back yards… 30-40 feet for the first 3 stories…100 feet for taller stories. Apparently, the zoning history of this disputed parcel continues to remain murky. CLICK for large image.

The Good – the City language, the intent

The good part is the content of the 2 ordinances. The new Los Altos CT zoning provisions do try to minimize impacts on  the privacy of R-zoned residential neighbors of the CT zone; it does add specific development standards for a CT housing project’s loading area, garbage collection, open space, rooftop, elevator, parking lifts, height, setbacks, etc.

The City Density Bonus law is forced to adhere to the  standard State “bonus units” formulas, but as part of the planning application process,  the City will present  a housing developer with a menu of “incentives/concessions/waivers”, which the City prefers.  It will “grant” these “on-menu” concessions, no questions asked — for example, 20% reduction of certain setbacks, 11 feet of extra height, etc.

For “off-menu” concessions, the City requests the developer provide evidence the incentives/concession(s)/waivers are needed to make the total project  with its  “Below Market Rate” units “economically feasible”.  The City would like a “pro forma” where the developer provides the “evidence.” The hope is that the ordinance tells a developer what kind of process and procedures to expect from the City and minimizes the time spent in planning, speeding construction and completion of a project.

This rear parcel of the multi-parcel Village Court has been one story forever. Is it really a CT zone or actually R-1 with permission for commercial uses?

The State of  California – namely the Department of Housing and Community Development, Division of Housing Policy Development – sent the City a letter criticizing the proposed Density Bonus ordinance and procedures. At the 4480 El Camino condo project job site, a backhoe is seen digging out the underground parking. Meanwhile the planning application for a Mohr clocks project next door (red tile roof)  is held up by the CT zone moratorium till November 2017.

The Ugly – Is the ‘Mohr Clock’ Developer Lawyering Up?

Mircea Voskerician – the would-be developer of the Mohr Clock parcels which are situated between 4880 El Camino and Whole Foods – has been calmly and politely “simmering” since the CT Zone Moratorium was slapped on last fall. Mirca can’t even BEGIN the planning process for his condo project. Applications are not accepted during a moratorium.  As is normal for a real estate stakeholder, he has attended all PTC and Council meetings when the CT zone and density bonus matters were items of discussion.

Mr. Voskerician sent a 35 page letter to the PTC which is included in public correspondence for the PTC meeting of August 3 2017.  He used 4-5 pages to summarize his reading of 5 attached  ‘exhibits’ including:

1.the final AB2501 bill as filed by the Secretary of State

2.the City of Los Angeles Planning Dept. memo about 2501 and other housing bills

4.analysis of ‘legislative intent’ as the bill changed as reviewed by the legislature

5.the original bill proposal and then a later revision, before it was passed (the revision shifted the burden of cost proof from the developer to the local government)

Mr. Voskerician objects to the new Los Altos Density Bonus ordinance for many of the same reasons as stated in the letter from the State’s Division of Housing Development Policy.[see above].

Lalahpolitico: Mr.  Voskerician is apparently aiming to “educate” Los Altos about the Desnsity Bonus situation, about the proper way to overcome our NIMBY tendencies. So far we are slow learners.

Both ordinances  – the Los Altos CT zoning and the City Density Bonus procedures – are expected to be approved by a majority of the PTC and sent on to City Council.  There may be a few tweaks during the August 3 PTC meeting. In the CT zone…see the the 5150 El Camino office building current rear set back…with homes on Casita Way behind that fence on the right. Notice a fireplace? or barbecue on the right?  almost touching the fence? This post’s first image is the backyard of a specific home backing up to this office building. The current setback is mostly of a  zero-story parking lot.  The three story office building has a setback of 40 feet and 30 feet in some sections. The building covers at most half the lot.

1.Get real about El Camino…

I believe that given the requirements of State Density Bonus Law SB2501, the City is doing the best it can to protect existing R-zoned neighbors of the CT zone who live close to El Camino.  Of course, all those neighbors wish there would be no change. That’s natural.  But look across the El Camino along the Mountain View side! The 6 story ASK building across from 4880 is already 20 years old! And now look at the new San Antonio Center!

Expectation of no change in Los Altos CT zoning  is just not realistic. And since 2014, the City has declared in writing to the “State Authorities” in the Los Altos Housing Element part of our General Plan that this is the prime area that will get the high-density housing growth…38 dwelling units per acre. That’s the way it is.

We’d have to “resist and revolt” against the unelected MTA (Metropolitan Transit Authority)  and ABAG (Association of Bay Area Governments)  to change this state of affairs.  [See 48hills.org]. Lalahpolitico is not quite ready for that. Are you?

Actually there is risk that the City’s Density Bonus application procedures — like asking the developer to provide  a pro forma providing evidence of the need for “off-menu” concession and waivers — could get the City in hot water. However there are many, many cities that are not happy about the loss of local control over zoning. Lalah predicts this State  “overreach” will get tested by some City in State court somewhere. I hope NOT by our fair City.

The language of the SB2105 final bill that says the burden in on a City — to provide written evidence of  “no or insufficient cost-reduction” provided by a developer’s requested incentive/ concession/ waiver … is just plain, meaningless gibberish .  Cost reduction of what?  It makes no sense. It can’t be computed. There is no definition.  The old way…the old language…”economically feasible” made some sense.  But that has been flushed. It needs to be brought back.

And in Los Altos and other high-cost-land suburbs…with SB2501, the developer comes in and just asserts that for the market rate condos to sell they have to be large luxury condos, say 1500 to 2000 square feet. And state law then requires that the affordable units in that project have to be comparable…aka large luxury units.  This is ridiculous….we could build three 600 square foot affordable units instead…under a different set of incentives.  And why does the developer get to declare that market rate studios wouldn’t sell in the Los Altos CT zoning area? This is ridiculous.

Getting back to Los Altos CT zoning, it is worth considering if we want to change the General Plan zoning for CT and CRS/R3 downtown from the current 38 units an acre to something else.  [the du/acre is a minimum AND a maximum].  If we want more studios, more 400 to 800 sq foot units,  more affordable housing…we should increase it to say 64 du/acre.  If we want less new residents, less traffic, we should lower it to say 19 units an acre.

We are zoned right now at a min/max of 38 du/ac in Los Altos –  that is the base on which  a developer can apply the density bonus…in the Los Altos CT zoning area and CRS/R3 zones. [CRS/R3 is First Street downtown.]

Lalahpolitico supports the the two ordinances as written…with whatever tweaks are made.