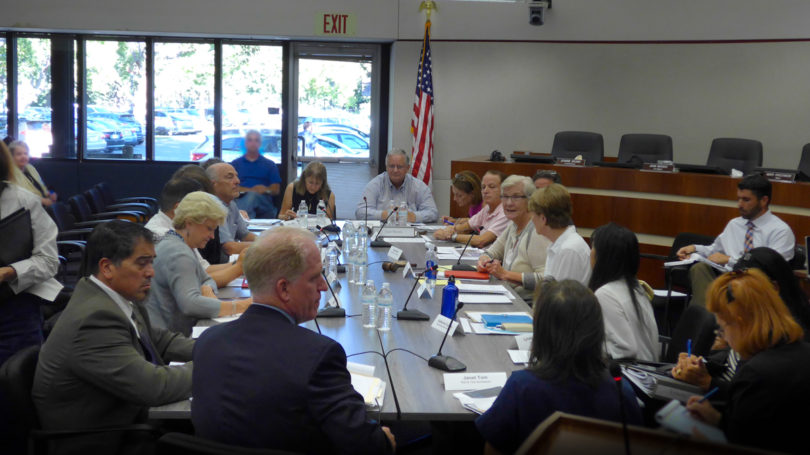 Council directed the Task Force to site the project by the History Museum... boosted the budget by $9M

At the Sept. 26 joint study meeting of the City Council and the Hillview Task Force, City Council was given a hard choice about Hillview project’s design. Should it site the new Community Center by the History Museum (“site 4”) or site it on the current soccer field (“site 5”)? Site 4 won out. The final straw poll for that choice was Prochow, Eng, and Mordo for site 4 and Pepper and Bruins for site 5. The architect will now move the project forward with designs for site 4.

Last night’s 60/ 40 split opinion in council for site 4 vs. 5   pretty much mirrored the opinion split in Hillview Task Force when they were polled Sept. 12.  The minority prefers the soccer field location because they feel adjoining the library is the top priority.  However the architect team Tam&Noll prefers the History Museum location because of 1) visual connectivity with downtown, 2) a larger site to accommodate more outdoor program space,  3) safer pedestrian path to the library via a upgraded “promenade” and other “place-making.” The majority of council of the task force members preferred site 4 for a variety of reasons. The architect prefers site 4 because it is larger and has a visual connection to downtown

Astonishingly, at last night’s meeting, the five council persons were unanimous in opting to increase the budget for the Hillview Community Center project from 25M to almost 34M in order to include a list of upgrades and options suggested by the architect.

There were about 10 public speakers. Several members of the public spoke for “not skimping” on the project. It would “be around for at least a generation.” “Do it right.”  “Costs are just going up and up. Do it all now.” A couple people spoke for staying on  the $20 to $25M budget and wanting to chose the cheapest site location, rather than site 4 or 5 which cost $1-3M more.

Mayor Mary Prochnow was conducting the meeting in a parliamentary fashion but trying to move steadily through the long agenda.  Decisions needed to be made! Direction needed to be given now. She started by going robin council, item by item, to each member for comment and a straw vote.  By the third item,  Councilmember Jean Mordo, just cut to chase, and blurted out he wanted to add ALL of the add-ons.  Everyone was breathless but then laughing. In short order, after a couple of quick explanations, it was clear all council person were on board with all add-ons. The meeting ending on time! LEED upgrade: from silver to gold… Council member Jan Pepper would have liked to go further to  a “net zero” building that produced its own energy.

Connectivity to civic center:  create a cohesive hub between civic center buildings, create green plazas between buildings, incorporate trellises for shade, involve the library delivery area, create a promenade to and from the library and San Antonio, “place-making.”

Increase interior building area by 3,000 sf:  Council member Jan Pepper wanted to increase space even more…but it appears the majority were satisfied with just the 3000 boost.

Increase outdoor program space by 2,500 sf:  This will create more spaces that can programmed for things like outdoor yoga or tai chi, etc.  Joining indoor with outdoor is a big theme of the Hillview project. Some people want a courtyard.

Refinish existing parking lot: the lot could be reconfigured, repaved, and landscaped more functionally and aesthetically.

During the meeting, Jean Mordo explained that the City was enjoying an operational surplus of $3 to $4 million a year and could easily afford the $9M budget expansion for the Hillview project.  He asked the City Manager to have the City Finance Manager create an report that would explain to the public that “the city is not going broke” and we can afford this upgrade of the Hillview Community Center project.

Lalahpolitico: Now that Mordo has alerted the public that there is reserve money in those city coffers, I can see the people lining up to spend it/”invest” it in other ways. How about parking plaza restripping? (no)  How about repairing every street in Los Altos to be nearly perfect in every way every day of the year? (no) How about restoring/rebuilding Halsey House even if there is no way to recreationally program it? (no) How about some money for Grant Park?(yes)  And so on.

Remember folks, it is City Council that prioritizes spending while considering staff reports and recommendations and input from the Commissions. And also, of course, your individual communications, whether by email, public comment, etc. On the left,Claudia Coleman is the chairman of the Hillview Task Force and does a masterful job being respectful, sensitive, yet keeping on agenda and schedule. Superstar, makes great meetings.

1)Binding wounds. Following the study session, the Hillview Task Force members adjourned to LACY building for a wrap up meeting that lasted a bit over an hour.  It was clear that the minority of Hillview Task Force who advocated for site 5 were sorely disappointed to the point of being in denial that council had made a binding decision to use site 4. Chairman Claudia Coleman was skillful in working though their pain.  The minority – to their great credit – was able to move through all the stages of grief within a half an hour. They switched focus to how to make site 4 a success and how the bigger budget would help with that.  The extra money for a “promenade” will really enhance pedestrian connectivity with the library.

2)Space allocation of the extra 3000 sq feet was discussed by the Hillview Task Force.  Several people detailed some of their preferences: add 500 feet to the 2500 sq. ft. community room as suggested by Council member Lee-Eng; expand the game room/teen space; add to the tiny cafe, add some more dedicated senior space; add some classrooms; perhaps specialized rooms a) sound proof music room for practice and a small audience, b) STEM room/Maker space, c) ceramics kiln. Lalahpolitico:  make the music room without any windows and it can be lighted properly/artifically to also use as video streaming/recording space: can you see Chris Jordan giving his a weekly city report on a video/podcast? Pam Tam of Tam & Noll architects, the architects for the Hillview Community Center project, expected to be completed in early 2020.

3)Children’s Corner proposal to pay for space at Hillview was a banned topic Sept. 26 at the 5-7 pm Council Study Session.  Apparently the next step regarding the Children’s Corner proposal is that council will say yeah, or nay at its Oct. 10 regular meeting.  [Updated post about the proposal here. The terms are actually a 8% return on City funds, rather than just 6%] here.  At the Task Force wrap up Sept. 26,  Architect Pam Tam   expressed concern that her team at T&N would not know if yet another 3000 interior feet was going to be added to 3000 interior feet already added that night.  Lalahpolitico: Is there going to be 18000 feet or 21000 interior feet in this project design?  Even if the extra Childrens Corner 3000 feet were to be in a seperate adjunct building…that would be nice to know…designwise for T&N.