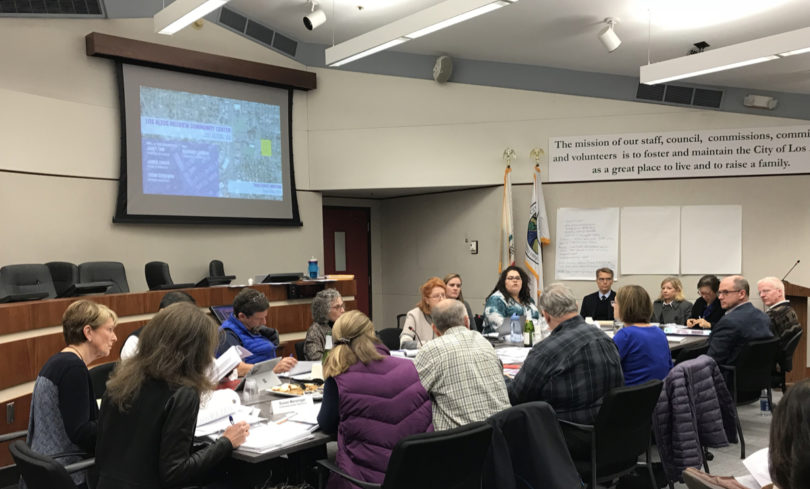 Written by lalahpolitico
[Update:Mordo Clarifications added at end] Last night Nov. 30, 2017,  the Hillview Task Force had its last meeting before the Dec. 12 recommendation presentation to council. The planned deliverables for Dec. 12 are 1) a space allocation guidance table for City programs/uses, 2) a specific site location and a floorplan concept, 3) a preferred exterior styling guidance, plus some member insights and suggestions for moving forward to the next stages of architects’ planning.  Sadly, the discussion last night uncovered some jarring miscommunications and confusions between Council, city staff, the Hillview Task Force and Tam &Noll (T&N) architects. [Update Dec.2: at end of this post in yellow highlight, see Mordo’s request to the City Manager for a clearer, more specific cost estimate breakdown from Tam & Noll cost estimator]

On Sept. 11 the Hillview Task Force prepared for a meeting with council two weeks later.  It was to present to its preferred 1) a space allocation table recommendation and 2) a site selection to city council two weeks later on Sept. 26. At the Sept. 26 Council joint Study session,  Council accepted the Hillview Task Force’s two deliverables – space allocation and the site selection.

In addition, on Sept. 26 T&N architects presented a menu of “extras” to the project budget. Council told city staff it wanted all the extras.  Among them was one that would increase the project budget by $2M in order to add up to ~3,000 square feet of interior space for City programs to the plan as suggested by Tam & Noll.

Later on…At the Oct. 10. council meeting, Council gave a green light to Children’s Corner remaining a tenant at the new Hillview, IF they could put more cash up front.  Staff and the non-profit started to refine the proposed lease, the terms of which pay for 3,000 square feet of interior space construction [and 2,500 of outdoor space improvement].  So there was no final determination that Children’s Corner was IN the plan. Lalahpolitico: I never saw or heard an instruction for the T&N architect to pencil them in the plans. Perhaps they did so independently without any nudge from city staff. Who knows.  [ FYI: The concept plans/sketchs/drawings have been revised around ever 3 weeks or so over the last ~8 task force meetings]

Lalahpolitico does recall that the T&N floorplan drawings for the Nov. 7 task force meeting  had the same number and list/names of rooms as the space allocation table delivered Sept. 26.  But the 3 floor plan drawings for this Nov. 7 Hillview Task Force meeting… identified the end of one wing as Childrens Corner, next to the City’s kinderprep. This was new. [See Triangle concept]. In the new drawings, the room sizes seemed the same as before.

I do remember the Hillview Task Force at its Nov, 7 meeting asking T&N  if the $2M worth of extra City program interior space [~3,000 feet] that Council had approved Sept. 26 was included.  The answer was yes.  But where T&N distributed the ~3000 for City programs across the floorplan… remained unclear to me…and apparently to everyone except T&N…some of the rooms got bigger? There had been discussion by the Task Force on Sept. 26 — immediately after the Council study session adding the ~3,000 feet —  that some rooms – the party/community room, the teen area, etc could get bigger, but also that a “classroom,” aka a MRP might be added. It was left up to T&N.  In the drawings for the Nov. 7 meeting…No MPR or any other new “room”  was added to the rooms line up…as compared to the space allocation table.

Lalahpolitico: as of Nov. 7, I know I was of the opinion that an extra 6,000 square feet beyond the Sept 26 space allocation table…was reflected in the floorplan of Nov. 7.  Today we understand, it’s just an extra 3000 square feet….the City program extra square feet. On Nov. 30, six of nine Hillview Task Force members present, preferred this layout C-1. Rec.Dept. Director Manny Hernandez, weighing in by voicemail,  seemed to prefer it a bit more too. This is NOT a final layout. [The key decision between two plans was whether the senior area and community room positions might be swapped]

Where we are now after Nov. 30

Bottomline:  The latest floor plan concepts and cost estimates shown last night Nov. 30. include all the ~3000 feet the Council approved for City programs…and are at the end of that south wing…mislabelled as Children’s Corner! The daycare space is NOT necessarily on the site.

As of Nov. 30, T&N presented what is described as more robust cost estimates that were “within a delta (6%?) of the new $34.7 M budget” that Council oked at the Sept. 26 study session. At the Nov. 30 meeting last night, T&N confirmed that the 3,000 square feet labeled Children’s Corner is the 3,000 feet Council authorized for City programs.  They said they just decided to depict it as the non-profit daycare for illustration.   Lalahpolitico: Why not depict it as extra MPR rooms instead? Puzzling.

T&N cost estimator described both concepts as within a “delta” of the budget as approved on Sept. 26 by City Council…$34.7M. He said architects could figure out ways to shave expenses as planning continued for the next 12 plus months. It does not include costs for extra square feet for Childrens Corner.

Coming later…Jean Mordo’s Nov, 30 remarks at the meeting about the  status of the Hillview Community Center project budget, what was authorized, etc.

On Dec. 1 Mordo emailed me a written clarification. He is asking the City Manager to get a specific breakdown of costs…

This is a transcript of his oral clarification the night of Nov. 30.

Task Force Member: Someone mentioned a cost of $1050 per square foot. So for Childrens corner, Multiply by 3000…[that doesn’t match with your childrens corner cost…]

Mordo: The 2.5M we got is $2M for the building itself, and .5M for doing the outside. Because they [children’s corner] will do the finishing [?furnishing?]. I understand your question. There is a difference…and I think we have to ask the cost man here [architect’s cost estimator] –there is a difference between the average cost which includes everything…preparation of the site, permits, blah, blah blah… and then adding an incremental marginal cost of doing 3000 more square feet.

Task Force Member: Jean can you shed light on the impact of this…. Inaudible … on the [?city budget forecast?]

Mordo: The staff is not here to some explanation of their side of it, but essentially the analysis that we [council] have requested is a full 10 year DETAILED forecast – a spreadsheet – projecting revenues and expenditures for the next 10 years.

What was done in a hurry {for Nov. 14 study session with planning} is a very ballpark analysis saying “well on average we have $3M surplus a year from operations, multiplied by 10 that’s 30M”. “And that’s what we have.” Except that our revenues are growing much faster than our costs. Since our main revenues are real estate tax and they are growing 6% year. Our costs, mostly personnel are growing at 3% a year. Therefore our operating surplus is increasing. In fact last year, the fiscal year we just closed, we had a surplus of $6.2M.

So that’s why we’re saying, we need to have the financial staff do a much more detailed long term analysis and show us the whole spreadsheet. And then place on the spreadsheet what we want to do [with the Hillview project], as opposed to doing a kind of global, kinda ballpark analysis which was done in a hurry.

Lalahpolitico: I saw the Nov. 14 study session video. A detailed spread sheet with line item analysis is what Council was expecting. But at the Nov. 14, 2017 Study Session Council meeting , instead they got a ballpark, high-level cashflow analysis – as described by Mordo in his remarks above. In past years, Lalahpoitico has seen different Councils go through each line item in a multi page CIP (capital improvement plan) spread sheet, moving items to later periods, inserting new items before other items in the timeline. This is common practice.

Plus at the Nov. 14, 2017 Study Session meeting, the City Manager was asking for permission to explore some of his spending ideas…1) to move ahead with converting LACY to a City Hall plus emergency center with “Comcast funding for state-of-the-art, wifi and audio video communications”. 2) The old council chambers room would be converted to a more proper customer service desk area. Council did not give permission for any of this. Some members were silent,  and some members said they like everything the way it is now.