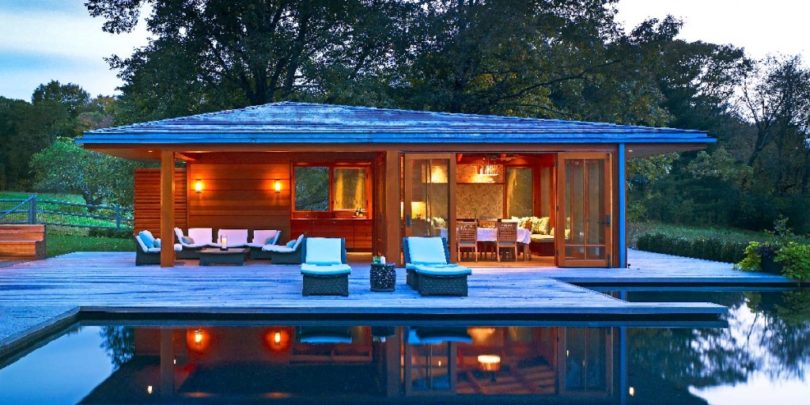 The next 6 months may be the best time window to build a granny unit or pool house in Los Altos...

Dateline March 15, 2018: Los Altos City Council failed to approve a conforming local City version of the State Accessory Dwelling Unit law…again. And that means the more lenient Jan. 2017 State ADU law applies instead of any City law.  So if you’ve been thinking about a granny unit, about an ADU, get going right now. You can safely ignore the City zoning code online when you search for “second living units.”  It is null and void.

Or if you’ve been wanting a pool house or workshop, a new “temporary” accessory structure ordinance that still allows some smaller setbacks than an ADU was approved 4 to 1. Council directed staff to make amendments and then bring back the revised accessory structure ordinance, a process that will take several months. Requested amendments: make the setback 10 feet or more, not 5 feet, keeping the daylight plane requirement; include any basement in the 800 sq. ft. limit.

Although 3 council members – Mordo, Prochow, and Pepper – had voted FOR both the new ordinances (with amendments) on the first reading of the ordinances February 27, apparently a recent change of City attorneys halted the momentum of the City ADU ordinance at the second reading March 13. That new attorney does not want to stand behind prior legal work and also claims that two new state laws that took effect Jan. 1 2018 needed to be considered. That attorney wrote a letter essentially ordering Council to not discuss/ read the new ADU ordinance on March 13. That attorney letter, plus some staff typos … have postponed that ordinance to much later on the legislative calendar.  City Manager Chris Jordan said it would take at least 120 days to get the two ordinances [ADU and an amended Accessory Structure] though the Planning Commission for two readings and then back to Council for two readings.

So in the meantime, Los Altans, build baby build…an ADU per State law… or a pool house closer to the fence than will be allowed in the future…

It was viewed as a “loophole” that at least one homeowner would surely be tempted to use to create a privacy killing accessory structure that would upset an adjacent neighbor and later be converted to an ADU. With the new “temporary” ordinance the accessory structure loophole is partly closed.  It is expected to be closed tighter within six months.

One public speaker on March 13 argued that all workshops, pool houses, and other accessory structures should follow the same setbacks as an ADU, which are the same as for a main house.  “Setbacks are sacred.  They mitigate the smell, the noise, and the light from people living next door.” Grey cells indicate where the 3 ADU laws differ. The Mar 13 City law and the State ADU don’t set minimum lot sizes…they just apply to all zones that are zoned single family home. If you want to build the max detached ADU,take action while the state law applies.

Per the table above, the enacted State ADU law and the unenacted March 13 City ADU ordinance lets any size single-family home parcel convert or build an ADU.  This is a big, big change from prior Los Altos law that allowed detached units only on 15,000 and up lots and attached/integral units on 13,000 and up. And both were capped at just 800 sq. feet irrespective of how large your parcel is. an ADU by the kroneteam.com in Arizona

Per the table above, the State law permits the largest possible DETACHED ADU. If you have a larger than average lot, and were previously frustrated by the 800 sq. foot City limit in effect these past decades, consider acting now while state law allowing up to 1200 still applies.

Lalahpolitico:  Let’s bear in mind that in ~six months, when the ADU ordinance comes back to Council, the language and provisions might be quite different…even more lenient?…or more likely…much more restrictive?  NIMBY’s have at least 120 day to spread their pixie dust and lobby good and hard for maximizing restrictions/disincentives on ADUs.

Not much.  One State bill wanted to stress that  an ADU can be added not just to “existing” single family homes, but also to “proposed” single family homes that are in planning and to be built on previously undeveloped land. The other bill wanted to make perfectly clear that  for a conversion of any existing space to an ADU, utility companies cannot charge setup fees for new hookups or service expansion. And as for ADUs that add space, hook up fees have to be “proportionate”…  According to the AB494 author, homeowners were being told that they had to pony up as much as $70,000 in such utility fees when converting existing space to an ADU. That was not what the original Jan. 2016 laws said/intended. AB 494 just makes the utilities scofflaws clean up their act.

Lalahpolitico: So these SB 229 and AB 494  “clarifications” of what was already implied or already stated in the Jan. 1 2017 laws… which our lawyer had not looked at…make absolutely no difference to the local City of Los Altos ordinances which were going through our City legislative process Feb. 27 and Mar. 13.  The City’s momentum on an new City ADU ordinance was stalled by errors, omissions, perhaps commissions…and the new lawyer situation.  Really sad. But here we are. We homeowners are stalled for at least 120 days.

Homeowners, please do realize, that the City is obliged to deal with your application for an ADU under the current State Law terms.  For many people, this may be the best time to move forward on an ADU conversion or an ADU addition.

Above are amendments make by Pepper and supported in a vote with Mordo and Prochow on Feb. 27 as described in a City staff report of Mar. 13. The items are reflected in the Law Comparison Table at the top of this article. Mayor Mordo suggested incentivizing people to chose to build attached rather than detached ADUs by allowing a higher maximum size for attached ones. A look at the R1-10 “Structure”
zoning Reqs now gone If you are thinking you want to create one of these accessory structures in your back or side yard, or may want to rebuild one these that is falling down, don’t rely on this above code which appears online on the City website when you search on “zoning”  “accessory structure”. It takes some time for that online system to be updated. Check at the planning desk.

Lalahpolitico:  It makes sense that big lots have bigger pool houses with certain setbacks?!  The old code had multiple ordinances for different sizes of parcels – R10, R20, R40. Yes! But in the new single ordinance as of Feb. 27, 2017 , this sanity seems to go away.  At the March 13 Council meeting, a member suggested that people who have large lots could ask for a variance! Since we have 6 months ahead of us, maybe bring back some sanity, some ratcheting depending on lot size?  Graduated rules for structures? Perhaps even for ADUs?  If this is not done, there may be so many variance requests that City staff the Design Review Commission could be very busy!

65852.2. Lalahpolitico is in contact with the HCD to verify if this is the best and most current version of the State law. There are extended families living in Los Altos that need to plan ahead for their shared shelter needs. If you are one of these, there is no need to wait 120 days for the City to get its act together.  The State law probably let’s you do what is good for your family… to share an abode with both privacy and proximity.

The City will get RHNA credit for what you build or convert.  Go for it. Win, win.

These bills, effective January 1, 2018, will clarify and improve various provisions of the law to promote the development of ADUs, including allowing ADUs to be built concurrently with a single-family home, opening areas where ADUs can be built to include all zoning districts that allow single-family uses, modifying fees from special districts, and reducing parking requirements.

3) Good run down on all the new laws

Good run down on all the laws including SB 229 AB 494 – jan 1 2018
— magazine of the league of california cities
http://www.westerncity.com/Western-City/February-2018/New-Housing-Laws-Change-how-Cities-Process-Housing-Applications/

4) The jump in ADU construction

In other words, ADU builders can apply for and receive construction permits over the counter at their city planning office, instead of seeking approval from a design commission or city council.

Another Terner Center (UC Berkeley) report from 2017 found that 58 percent of ADU owners rent their units at below-market rates.

Finally, Garcia wants to see a change to owner-occupancy rules. Currently, California requires homeowners to live on site in the main dwelling in order to build an ADU. He points out that there are many single-family homes on the rental market already on lots that could also house an ADU. But under current law they cannot.
author David Garcia, Terner Center’s policy director. “California basically legalized ADUs throughout the state on January 1, 2017. It turned out, there was quite a pent-up demand from homeowners.”

According to the Terner Center report, it takes 18 months or less to take the majority of ADUs from design to completion.”

https://nextcity.org/daily/entry/subsidized-housing-development-reducing-displacement-san-francisco… good POV article on filtering really not being better than subsidized housing