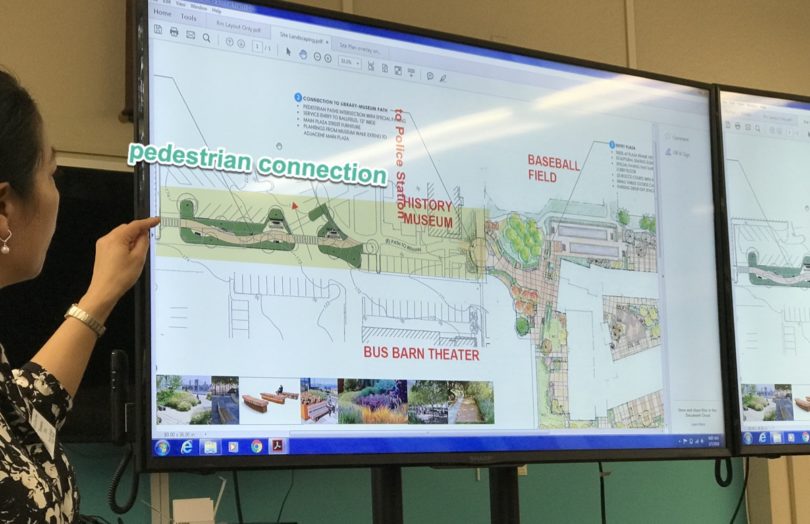 Architects Tam & Noll are in the schematics design phase now. On March 17 City Council agreed to continue with the triangle courtyard design for the Hillview Community Center project, after toying with the idea of requesting a “change order” to a square courtyard design.

T &N showed some new, colored pedestrian view renderings of what a person will experience when walking at the Hillview Community Center project building including: 1) approaching main entrance on foot from the library, 2) walking up to the doors of the the main entrance, 2) stepping inside the lobby and community room.

The landscape architect was able to display — in some detail — his ideas so far. The architect’s exterior and interior materials, neutral colors, and windows seem attractive as shown. But keep in mind that both the landscape design and the building finishes…

Architects Tam & Noll have progressed to the schematics design phase now. On March 13 City Council viewed a T&N design presentation and agreed to continue with the triangle courtyard design for the Hillview Community Center project, after briefly toying with the idea of requesting a “change order” to a square courtyard design. [Note: the citizens’ Hillview Taskforce already considered the square design, as well as other designs, but a majority of the Taskforce chose the triangle design.]

The architects said such a design change order would have added some more space to the central courtyard of Hillview Community Center project but also have added about 8 weeks to the schedule.  Also, the separate, intimate, activity patios on the south side – such as for the main community room — would have had to be eliminated. The architect made a persuasive case for continuing with the triangle courtyard design.

T &N showed some new, colorized pedestrian view renderings of what a person will experience when walking around at the Hillview Community Center project including: 1) approaching the main entrance on foot from the library, 2) walking up to the doors of the the main entrance, 2) stepping inside the lobby and community room.

The landscape architect was able to display — in some detail — his ideas so far. The architect’s exterior and interior materials, neutral colors, and windows seem attractive as shown. But keep in mind that both the landscape design and the building finishes for the Hillview Community Center Project are expected to change and be refined. The current layout  of Hillview Community Center project shown above moves the Whistlestop “train” play structure to the edge of the existing soccer field. The bocce court – popular with seniors – is currently placed by the existing ball field.  There is a half-court basketball court positioned just behind Neutra House. These could change.

Per Tam & Noll the Hillview Community Center Project is still on budget at $34.7 Million.  Move-in is still scheduled for 2020. The floorplan as shown on March 13, 2018. With Children’s Corner deleted from the plan, several rooms are larger. Another Multi-purpose room was added adjacent to the City Kinderprep school. The landscape buffer with the Eleanor Ave. neighbors to the east is larger. It provides room for possible but politically unlikely “future expansion.”

There is still dismay among some ex-Hillview Task Force members and their “supporters” about major design decisions of the past.

“It’s not the best possible project” …unless more of us get involved.   Some folks seem worried that the future minor “shopping” decisions on colors, exterior materials, interior design, windows, room dividers and plantings, etc., need broad “input from the community.”

Perhaps that is just micromanaging to the nth degree? – Lalahpolitico

As is normal, many of our citizens are only now becoming dimly aware of this complex Hillview Community Center project which started almost a year ago.  And they are mystified by why “this and that” was not considered. But of course it was considered months ago.  They just don’t know that fact, even if the read the Town Crier regularly.

For example, “Why can’t the Hillview Community Center Project include a full service senior center along the lines of the one in Mountain View?”  Answer: Los Altos is not like Mountain View; starting in the 1950’s, we zoned for 99% of our city land for “mini-estate” residential, so we don’t have much commercial property tax money, and we don’t have much publicly owned land either.

Lalahpolitico: What are the page views on the City web site for the the splendid coverage of the Hillview project?  You can provide transparency for the citizens, but you can’t make them look.

Here are 11 images from the Tam & Noll presentation that let you visualize and walk through these brand new renderings of Hillview Community Center Project as of March 13, 2018.  You’ll experience the look and feel of some of the key spaces in the new building from a human perspective.  Depending on your browser, the “gallery” may be presented differently. Click on a photo for larger, or click through  arrows on the carousel, if available in your browser. 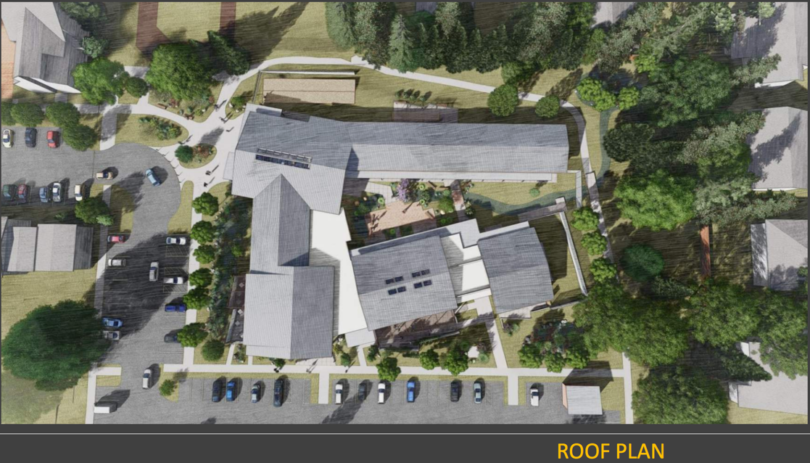 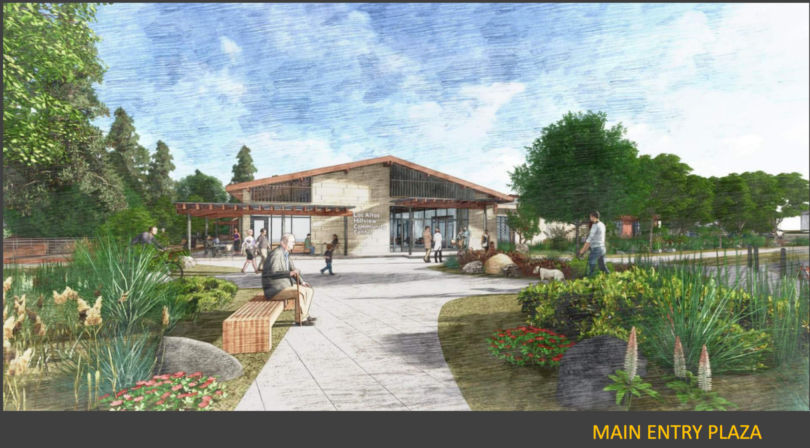 View walk the pedestrian connection from the library 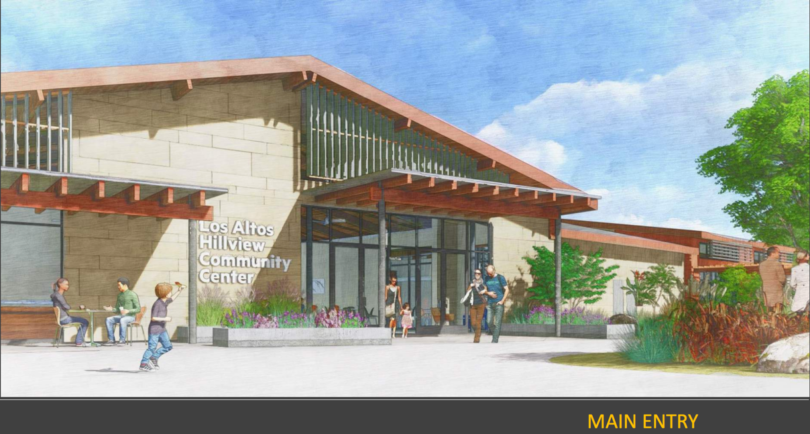 Walking towards the main entrance and lobby 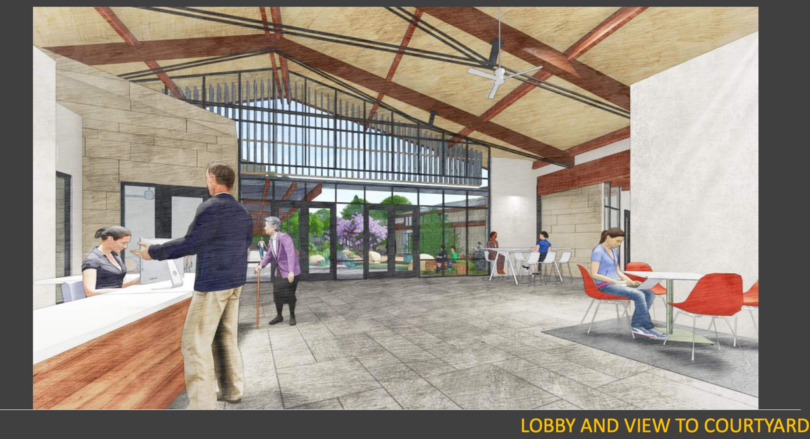 Inside the lobby, looking towards the triangle courtyard beyond the glass wall. 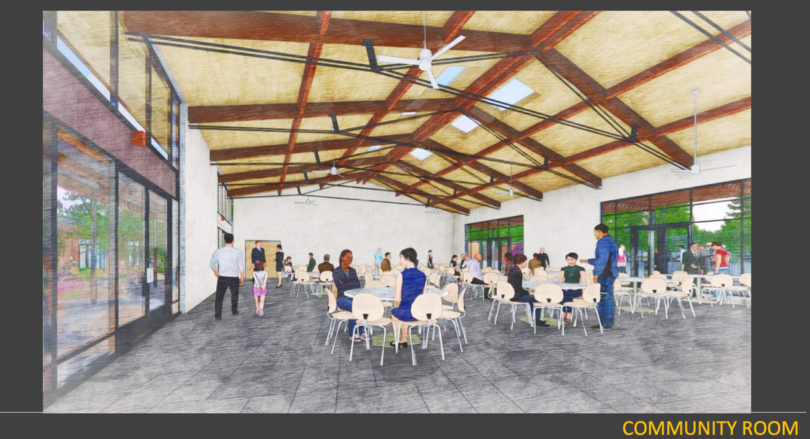 Now inside the community room 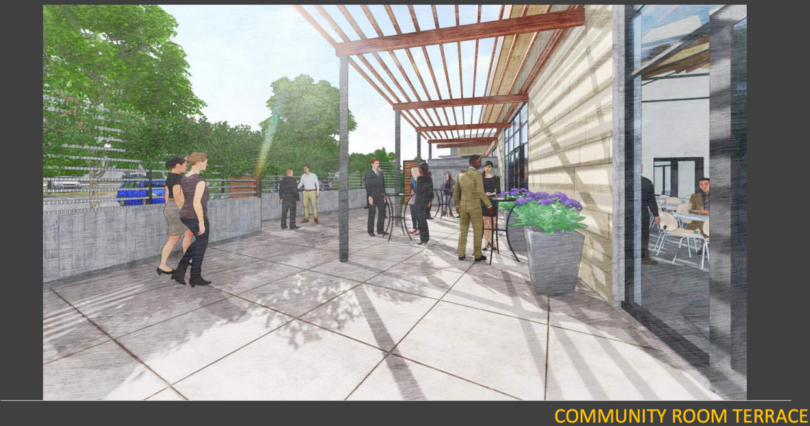 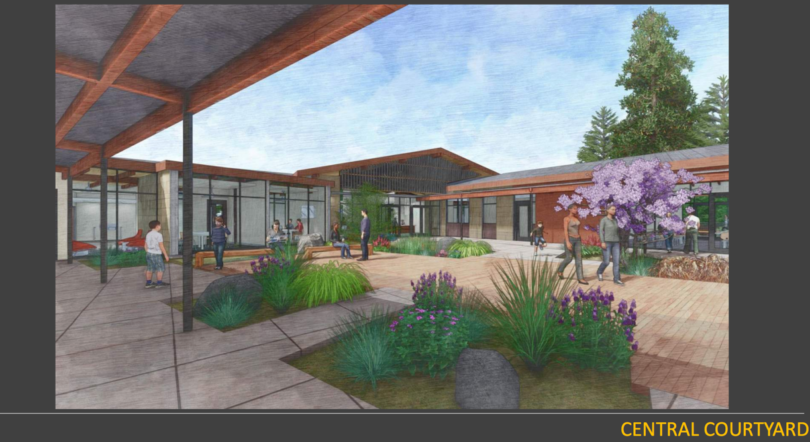 Step out of the community room through the glass wall in the other direction into the triangle courtyard. In the distance the peaked roof of the lobby 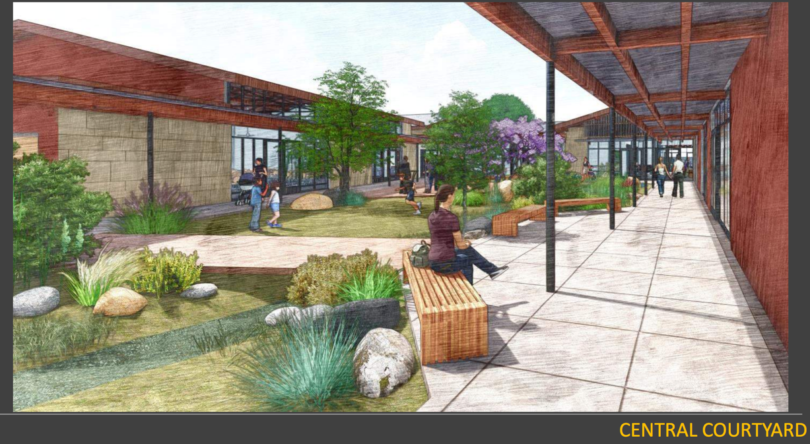 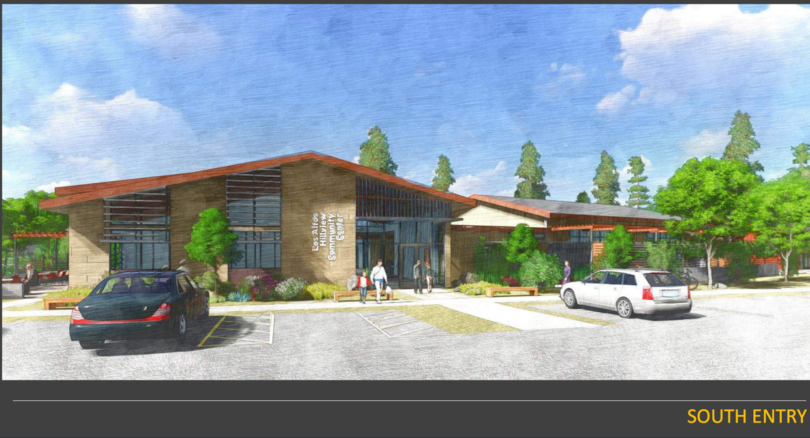 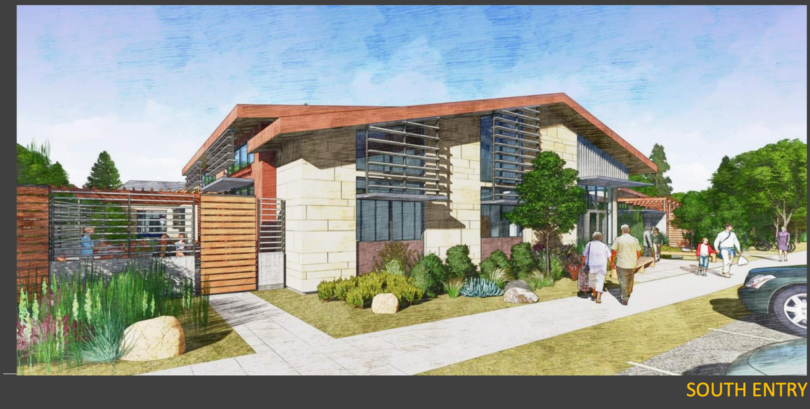 Moving closer to the senior entrance…a slightly different angle. This time the senior patio has more and different fencing

Some people think the final Hillview Community Center Project will be more perfect if the process slows down. “Slow it down, or it’s not going to be the best possible project” … unless all of us cocktail napkin architects, interior & landscape designers get involved.  They feel more participatory democracy will yield the best possible — aka optimal — design for us “the community” someday in the future. “Let’s not make a mistake when we build something. Let’s not miss out on the best possible.”

Lalahpolitico: If we go slow, slow, slow enough, won’t the process and the endless deliberating just roll us to a stop…perhaps when building costs double? Is the high chance of a “stop” what this minority is willing to risk?

Lalahpolitico: The Hillview Community Center Project looks handsome. If it isn’t the “best possible” — as if anyone can know what that would be — many are saying it is way better than they dared to hope. I hope T&N and City staff don’t get bogged down by the well-meaning micromanagers among the “community.” Let’s keep going and stay on schedule.

The T&N design has erased the pre-school out of the plan.  At the March 13 meeting, the architect confirmed the Children Corner’s block of space has been spread around the other rooms …as was previously directed by City Council.  For example, the community room can now accommodate 180 vs. 150 as before.

Lalahpolitico:  I wish someone would make the “deletion” of the 120-kids at Children’s Corner pre-school official or explain how it has not been deleted. Perhaps make a low-key announcement, give the public some resolution about the demise or cryogenic suspension of the proposed 20-year lease arrangement. It seems too difficult politically now, doesn’t it? And perhaps the pre-school’s parents now prefer not to expose their children to the “angry” minority of the general public who have made it very clear they don’t want these kids included in the Hillview Community Center Project. Today the TK-preschool program at the Hillview uses Rm. 14 from about 8:30 to 2:45. You can see that it is “dedicated” space  and will not be used for afternoon or evening classes by an outside contractor. One should expect the same at the new Hillview.

Lalahpolitico: In the meantime, please tell me how great it is that the competing Kinderprep preschool will be used by only ~30 lucky children from about 8 to 2, six hours a day, 5 days a week? The room would not be available to the general public on weekends either; it’s a school program.  It has a lot of stuff specific to each student! Of course, if the teacher is willing to do a massive setup every morning and a massive tear down every afternoon, then the room could be available and not just for school exclusive use.  Seems unlikely: if you’ve ever see the setup and tear down of a conference…you know how wearying that process can be.

Lalah just does not understand why Kinderprep is morally better, more deserving of exclusive space than Children’s Corner at the City’s new Hillview?  Both would use their interior space EXCLUSIVELY, the spaces NOT being available to the general public. Kinderprep reaches no more than 30…whereas Children’s Corner is reaching 120/60. Space adjusted… it’s 30 to  60… mainly because Children’s Corner has longer hours, and AM and PM sessions.

Here is a link to to Tam & Noll’s slides showing the Hillview Community Center Project as of March 13, 2018… on the City website.