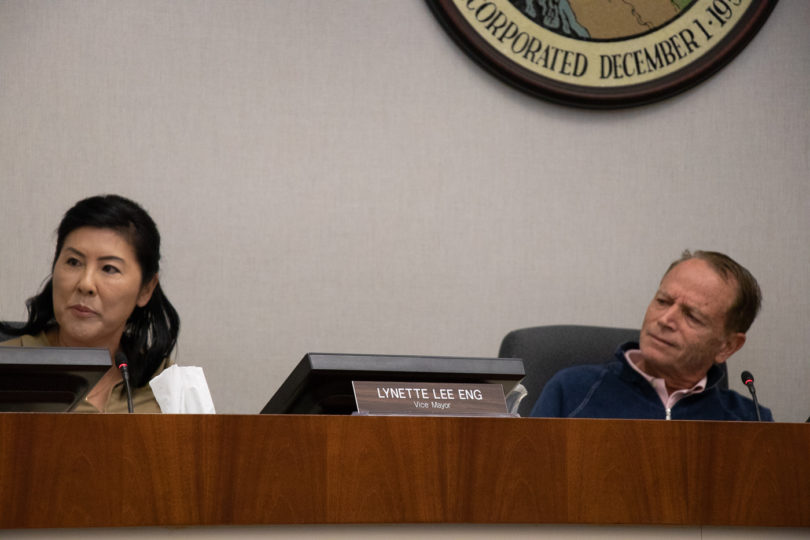 Los Altos City Council has directed staff to begin a process to create an ordinance to amend the General Plan. The amendment would prevent the sale or redesignation of City-owned parks and City-owned open space unless there was voter approval. The action this morning, August 7, 2018, is the council’s response to the citizen-initiated Save Our Parks — the SOP initiative. That initiative will be on the November 2018 election ballot.  Council has decided NOT to place a second, competing initiative on the ballot. It weighed that possibility for over two months without reaching a majority consensus.

[You are asking…so what is this citizen SOP initiative anyway? Read about it our “explainer” post from May 2018. It interferes with realizing the ‘Downtown Vision’ recommendation, a consultant report which council accepted last May. See this post…for the insight into the economics behind the recommendations.]

Ironically, council member Lynette Lee Eng — a former Parks and Recreation commissioner and a supporter of what some have called the “evil, false, duplicitous” citizen SOP initiative — was the lone council member who did not concur with the majority four members. Several of the council members were perplexed by Lee-Eng’s position and tried hard to persuade her to join the majority.

Jan Pepper, Councilmember, City of Los Altos tried hard to persuade Lee-Eng to side with the majority so support a council General Plan amendment to protect parks and open space

For example, Jan Pepper asked why did Lee-Eng not support protecting parks and open space in a General Plan amendment now? Pepper pointed out that a future council – one elected this November – could further amend the General Plan with the some of the more controversial SOP ballot initiative elements, such as including ALL city-owned land. She asked…Wouldn’t it be better to get going with some definite parks/open space ‘protection’ now? If some residents want more constrictions on our representative democracy, they can vote for the SOP ballot initiative in November.

At the end of the day, Lee-Eng was on the record as admitting that in her opinion the council amendment “didn’t go far enough.”

LosAltosPolitico: The SOP initiative does look ever so much like a destabilizing change in our form of local government from representative democracy to direct plebian democracy. Wait!  Maybe we really are eager to show up for meetings and for frequent voting in order to practice ancient Athenian democracy or that of the Swiss Alpine cantons?    https://en.wikipedia.org/wiki/Types_of_democracy

Lee-Eng said if a roll-call vote were taken by Mayor Mordo, she would NOT vote NO on the ordinance to amend the General Plan.   Instead, she would ABSTAIN. The attorney said a “vote” was not the procedure in this instance, because this ordinance action was not agendized.  Instead, Diaz read aloud, back into the record, the “staff direction” given by each council member as he heard it.

Jan Pepper asked if the council could do both — pass an ordinance to amend the General Plan, BUT ALSO put a council-sponsored initiative to compete with the SOP initiative on the November ballot. Staff said YES. However, there were no council members who were supportive. Thus, the idea of a competing ballot initiative was dropped. [Over a month ago, in public comments, former mayor Roy Lave was the first to suggest that council simply pass an ordinance/amendment to prohibit the sale of parks.]

Jeannie Bruins was ready to make a motion, but first Lee-Eng wanted to ask staff some questions.

Lynette Lee Eng, Vice Mayor City of Los Altos California. She alleged the council did not seem interested in her opinion about the SOP initiative because they were “interrupting” her. Others thought they were trying to “persuade” her to support the council ordinance to prevent the sale of parks.

Lee-Eng:  Do you know of any procedural errors or defects with the SOP initiative? Ones that would allow us – the City –  to successfully challenge it in court?

Attorney Diaz:  I know of nothing concrete, I’ve heard some speculation.

Lee-Eng:  If we were to do this ordinance to amend the General Plan… what would the timeline be? The attorney pointed out a couple of timeline scenarios, both involving public meeting noticing and routing through the planning commission. One scenario also involved mandatory consultation periods with county agencies. Diaz thought it might take a few months, and thus perhaps the process could only be concluded after the election. However, there was some chance it could be concluded before. “But it would be “extremely tight.”

The four council members in the majority seemed to think that the “council intention” to protect parks through a general plan amendment would satisfy many voters.  By October there would be evidence of the amendment timeline moving forward. The would be good enough to persuade many voters to reject the SOP ballot initiative as too complex and too constricting. However, it would be even better to complete the amendment process before the election.

Council member Mary Prochow thought it was fortunate that the council election campaign for two seats was coming up. It would provide an opportunity to “educate the community. ” That’s the time when “voters pay much closer attention to local government matters than usual.” Los Altos Council member, Jeanne Bruins made the motion to direct staff to create a General Plan Amendment to protect parks and open space from sale or redesignation to another use.

BRUINS MOTION: I move we direct staff to begin the process to expeditiously amend the general plan and do any additional supportive ordinance work that needs to done, to achieve the same net effect as Option 2 [in the staff report – Prohibit the sale of any city-owned park or open space without voter approval].

[These public comments were actually made BEFORE council discussion and council action/direction. The author has placed them here to allow the story of the council decision to flow uninterrupted.] King Lear, former mayor of the City of Los Altos California supports the council amendment to the General Plan to protect parks and open space

I support an ordinance [to amend the General Plan and also to NOT have a council-sponsored initiative competing with the citizen SOP initiative.]

In 66 years this City has not sold parkland, in fact, it has bought it.

So it {SOP intiative} is not an attack on selling parkland but is instead an extremely …I would say evil… initiative to kill local government to a major extent. Our entire nation at all levels of government is based on representative democracy because the public has no time to look at the complex trade-offs and the issues and make these kinds of decisions.  You have to leave the city with some flexibility.

There are so many[negative] things tied up in the [SOP initiative] leases [language.] It would have prevented past innovations like the Civic Center’s Neutra House, Bus Barn Theatre….

Instead…let’s have the election narrative that says, we’ve never sold parkland and the City won’t ever do that. As an election block walker/door knocker, I’ll say to people, ‘No, I’m not here to defend selling parkland, I’m here to defend the nation’s model of representative government. [Please vote NO on the SOP initiative.]’ I ask you [Council] to pass an ordinance [ such as to amend the General Plan], and if you can’t do that, do nothing [do not create a council-sponsored competing initiative].

Let’s join together…. King Lear, you called it [SOP initiative] evil — I call it duplicitous, I call it false – to defeat this SOP initiative on the ballot.

So let’s defeat it. Ron Labetich Ron Labetich supports the council amendment to the general plan to save parks and open space.

I think you take alternative 5 [ create an ordinance for as GP amendment/ but create no council ballot initiative].

We are behind you to support this.

The City of Los Altos-sponsored ballot measure will raise the ‘hotel’ tax from 11% to 14%.  Palo Alto is at 14% and may raise it to almost 16% per City Manager Jordan.  With staff, Jan Pepper and Lynette Lee-Eng will develop the YES arguments for the ballot, and the later rebuttal to the NO arguments.

Mary Prochow, council member City of Los Altos California. She recently announced she is not seeking a 2nd term this November. There are six candidates for 2 seats.  Mary will be missing out on Lynette Lee-Eng’s turn to hold the Mayor’s gavel, a turn which is slated to begin January 2019.

No on SOP ballot statements:

With staff, Mary Prochow and Jeannie Bruins will prepare the NO arguments on the SOP initiative.