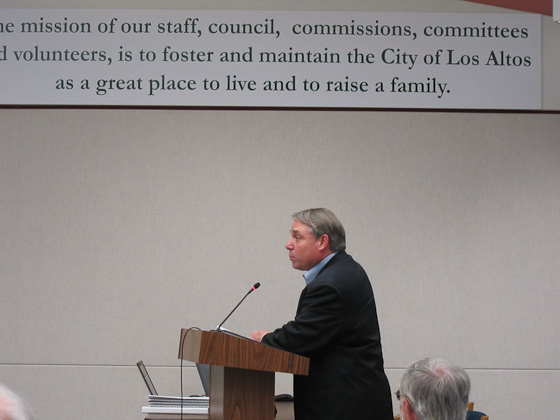 Von Packard speaks for himself and Ron Packard, who recused himself Von Packard speaks for himself and Council Member Ron Packard, who recused himself

Los Altos City Council Minutes – partial…Hot off the presses…the Sorensen project was quashed at Tuesday’s Los Altos City Council Meeting. After 20 speakers, 17 pro and 3 con, the council unanimously voted. Sorensen obviously did pull in “friends” to speak publicly, but said only one was an investor. The council disagreed with the planning commission recommendation and agreed with the staff recommendation.

After about two hours of hearings, public comment and discussion, the Council’s motion was to “not adopt the mitigated negative declaration…and to deny the design review and use permit applications per the listed findings in the staff report.” Fishpaw succeeded in striking the staff finding – “not meeting village character guidelines 2a.”

Council Member Megan Satterlee: “Location of the paseo…I like its current location…the exiting 4 Main has an existing blank 2 story wall, it is stump stone painted, there is nothing there. Having that as one side of the [40 Main] paseo would detract from the attractiveness of that paseo [if it were moved to the north side].”  LALAPOLITICO: the paseo was the public benefit the developer was providing. In the final plan the paseo was located on the south side, not next to the Packard Building. At the meeting Mayor Val Carpenter was recommending a revised Sorensen plan should put it on the back on the north side.

Council Member David Casas…”no money behind the scenes pulling the strings…” Satterlee also reiterated that sentiment — paraphrasing…Look at my voting record, I’m not influenced by Packard. I never talk to him. [Ron and Von Packard,own the property at 4 Main – next door to the project at 40 Main.  The project would interfere with their view corridor.]

LALAHPOLITICO: The Council was looking forward to inculcating the brand new semi-virgin Planning Commissioners about the Council Policy re: developer incentives, and height measurements.

We will be following up with in-depth coverage in a few days. Original proposal for 40 Main about 2 years ago The Sorensens say this is what the Packards told them Council said 40 Main was NOT a gateway to Los Altos building - because mid block!!!