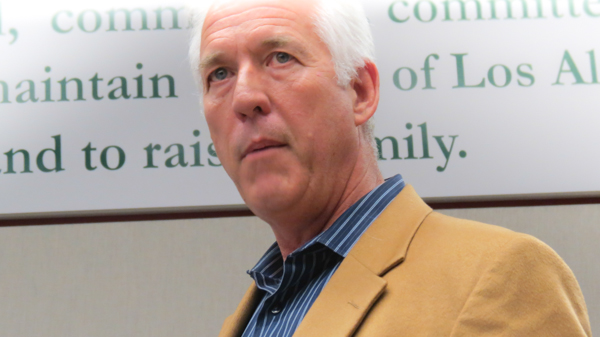 Bill Mateson, architect and member of the Los Altos Parking Committee. He said the City was keeping members in the dark about the investigation into alleged Brown Act violations

Written by lalahpolitico
AAt the Tuesday, March 8, 2016 Los Altos City Council meeting, several members of the ad hoc Los Altos City-wide Parking Committee spoke during public comment, asserting that the City and City Attorney were keeping them in the dark about the Friends of Los Altos (FOLA) inspired City investigation into possible Brown Act violations. During the public comment period, Los Altos Parking Committee members, Bill Mateson, Mark Rogge, Kim Cranston, leveled  3-minute complaints about the City’s conduct. Remarks on the topic start at about 25:00 and continue till about 42:00.

Bill Mateson said he and other members were not properly informed of the investigation, but rather being kept in the dark.; he asked that the City hold a special meeting with the full Los Altos Parking Committee. Kim Cranston, commericial property owner and member of the Los Altos Parking Committee, said the handling of the investigation could have a “chilling effect” on volunteering for City committees.

Kim  Cranston said he had never seen a detailed list of FOLA’s specific Brown Act charges. He wondered if the City Attorney was representing not only the City, but also the members of the Los Altos Parking Committee like him. He charged that City Attorney  Jolie Houston would not talk to him — I’ve never before been represented by a lawyer who wouldn’t talk to me.” Cranston went on to say that this incident would have a “chilling effect making Los Altans much less likely to volunteer for City Commissions and Committees.”

Mark Rogge, member of the Los Altos Parking Committee read his free-verse poem about “the bully.”

Mark Rogge read his free-verse poem about “the bully,” alluding to the FOLA group and one its leaders, former mayor, Ron Packard.  His finale – “Please don’t support bullies.” He also suggested that there were more open ways of doing an investigation; he’d seen several. [See earlier post for the context.]

Jack Kelly — one parking comittee member who was not named  in the FOLA allegations delivered by David Casas Feb. 8, — defended the Brown Act behavior of Councilmember Jean Mordo and Los Altos parking committee members. “And if a Brown Act did occur, it was totally unintentional.”

City Attorney, Jolie Houston, in rose jacket, is an ever constant attendee at virtually all City Council meetings. She often advises on best practices and offers opinions on legality of courses of action.

Later, after all the public comments, City Attorney Jolie Houston replied that FOLA’s  charges in full detail were posted on the City web-site and also the FOLA website. [Lalahpolitico’s prior article and links to charges here.] Houston said she had consulted with the County District Attorney about best practices for conducting this kind of an investigation, and he had vetted her approach. Houston accused “several committee members” of being “non-cooperative with the investigation.” She said she had sent several emails to all Los Altos Parking Committee members, keeping them abreast of the investigation.

[According to the Town Crier, the City has retained the law firm of Sheppard, Mulin, Richter & Hampton to conduct the investigation. http://www.losaltosonline.com/news/sections/news/201-traffic-development/52390-] City Councilmember Megan Satterlee. “With the investigation, we’re trying to save the Parking Committee’s reports from having to be redone.”

Later, City Councilmember Megan Sattterlee tried to explain that the City investigation was an attempt to “preserve the work product [findings and reports] of the current Parking committee.” Lalahpolitico: FOLA has asserted that if there were Brown Act violations, the City would have to just start the work over again – new Parking Committee recruitment, new research, new findings. Satterlee was trying to assure the current Los Altos Parking Committee members that this investigation by an outside law firm  was the best way forward to avoid having to flush all their work. Whosh!

City Page of the FOLA, David Casas 3 minute comment, and the detailed FOLA letter with attachments.