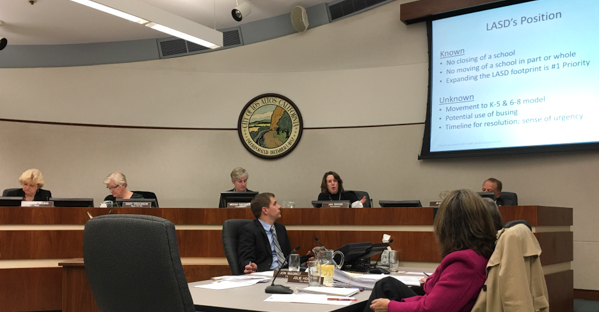 Los Altos City Council discussing whether to continue with the joint city-school public lands committee. They decided to quit.

On March 8, the City Council voted 5-0 to withdraw from the ad hoc joint City-School Public Lands subcommittee; a letter from the Mayor will be sent to LASD informing them of Council’s decision.  There will be no more of those joint City-School meetings. Catherine Nunes spoke for keeping the City’s 18 acres for City uses and for a more complete visioning of the Los Altos Civic Center.

About a dozen members of the public spoke at the Council meeting March 8 to advocate for preserving the Civic Center and Hillview for use by City residents and for current City recreation and park services. They said LASD owns over twice as much land as the City owns, and it is the District’s responsibility to provide new schools, not the City’s. Only one LASD trustee, Tamara Logan, and one member of the public, a retired public school teacher,  spoke for adding a school – Bullis Charter School – to the City-owned civic center/ Hillview lands. Jeannie Bruins: I don’t see how the City-School Public Lands committee will arrive at any new information…

Even without the weight of the “Save Hillview” public comments, the City Council members seemed to have already nearly convinced themselves that the joint City-School Public Lands Committee was a lost cause. Jeannie Bruins remarked , “I can’t see how the process will arrive at any new information.”

Megan Satterlee asked LASD trustee Tamara Logan if the summary of the situation that the Public Lands Facilitator Spano had stated was true. Satterlee ask Logan, “Is that true about the District?”

When Tamara said “Yes, it is true,” that seemed to make up Satterlee’s mind.

Lalahpolitico: Thus, It was immediately clear that the District was not going to relax the “constraints” on the Public Lands discussions, the constraints which the City had asked to have relaxed. See on Slide “Ease Constraints in Order to Move Forward.”

Lalahpolitico:  Getting to… JUST SAY NO

I think the experience of the “edgy” tone of the City Council’s Engagement-Outreach Subcommittee meetings with parents on March 3 at Blach in the morning and at Almond in the evening contributed to the Council deciding to call it quits on the joint City-School Public Lands Subcommittee. To be clear, many parents transmitted a somewhat confrontational tone. Prochow and Pepper had  invited parents to drop by a Council Meeting. Ominously, there were no parents at Council this night for this discussion.  Did their political handlers not think it was necessary to make a show of force? They expected a slam dunk?  I guess so.

At those March 3 parent meetings at Almond and Blach, Pepper and Prochow said they would seriously consider holding a publically-noticed Council Study Session of the full council at a LASD school…to discuss school sites. Perhaps upon further reflection, Pepper and Prochow recalled the almost raucous 2012 Packard Council study session which discussed the subject of school sites—-especially Hillview. Lalahpolitico missed that event, but apparently 200 to 300 parents showed up to say more or less the same thing 300 times – “give us Hillview, please give us Hillview!” I guess in these last few days, Councilmembers Pepper and Prochow began to realize the folly of repeating the Packard council’s “engagement” mistake.

Some old Patch.com coverage of the 2012 event.
http://patch.com/california/losaltos/joint-council-school-board-meeting-in-the-offing

Also a few days ago, I wrote this article about “LASD Policies” which may have helped some of the City Councilmembers understand the LASD board’s frame of mind. It’s good to realize who one is trying to negotiate with.

I suppose there will be some “heat” and  blow back from the “activist parent” community after this action of quitting the Public Lands subcommittee. But it’s better than actually going through with the the circus of City Council Study Sessions about school sites with those activist LASD parents. This quitting definitely rains on their parade plans.

The City has appropriately stressed in these prior Public Land meetings and the Parent Engagement meetings that its key role is in helping LASD and Cupertino Union with traffic issues. And the City needs to take more credit for the traffic improvements the City is constantly making. Lalahpolitico was amused when one parent at a Blach/Almond “Engagement” meeting thought it was the District that had put up the 15 mph speed limit signs in front of schools! The City needs to take more credit for all that it does for the District. Pop-quiz: Who installed the sidewalks in front of Egan?

Suggestions to the City: 1) Perhaps add the “school traffic” topic to the online Open City Hall program. 2) The standing committee, the City-Schools Issues quarterly committee — which mainly discusses traffic and sport fields — could be held at schools rather than At Hillview Room 2. City Councilpersons, get your engagement there! Rotate through the schools with the most traffic issues first. Have some of the meetings scheduled for after morning car drop-off, others at 7pm after the parents’ trains get back from the city. See if is there is more attendance from parents, than when holding these important meetings at Hillview Room #2 at 5 pm. Judging by the City’s two “ Engagement-Outreach” meetings last week, traffic/student safety is at least the second most important school issue to parents.

The District will have to figure out the parents alleged No. 1 issue – new school facilities — without City help. It’s the District’s job, not the City’s. A list of the meeting in the last 12 months. Jeannie Bruins complained about the long gap between the September meeting when the District agreed to provide materials and when they were finally delivered, aka December Holiday break. lease, not a sale. Actually is solves the problems of siting BCS and NEC growth. No or minimal impact on City services. Sketch of a way to site a 900 student school on the N. end of the Civic Center The Council check with School Trustee Logan, that these site sizes were what people are aiming for… The read outline areas were what the City could be adding into consideration as a site for 900 students. However the 1.8 History acres were strongly discouraged. The City tried to asses the School District’s current positions…