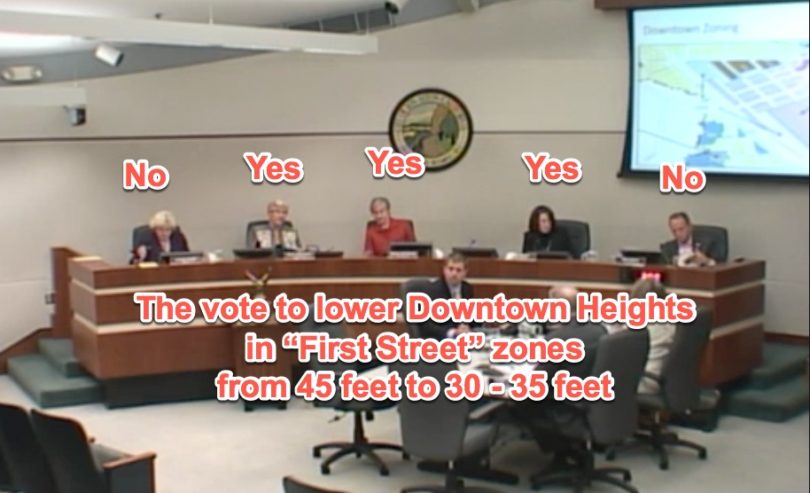 Prochow, Satterlee and Pepper, Yes lower. Bruins and Mordo, No, not like this

The allowable building heights in the Downtown Los Altos CD zone and CD/R3 zone were lowered by City Council (3-2 vote) from 45 feet… to 35 feet for residential projects and to 30 feet for commercial projects (office/ retail/ mixed use) at the Oct. 25  council meeting.  Spurned for over a year by the PTC, the Downtown Los Altos Buildings Committee members have been tirelessly lobbying Council for this height change. [Front setbacks are still 2ft. for commercial and 10ft. for residential] The two ordinances that reduce the heights of building and towers will be finalized in a “consent” vote at the beginning of the next City Council meeting Nov. 8, 2016. The 30 foot height limit for commercial buildings almost certainly means there will be no developer applications for those kinds of projects downtown Los Altos anytime soon.  There is no such thing as a “density bonus” for an office building or retail building (maybe when mixed with residential though).

Lalahpolitico: The  LACI idea for a parklette and office building looks dead. Maybe LACI will propose residential instead? Maybe First Street will go completely residential with these new rules? The 35 foot limit for residential Downtown Los Altos sounds great, but we’ve still got that pesky State Density Bonus law out there.  Height?  We are working with the wrong metric. The density is calculated on dwelling units per acre in our town.  For areas Downtown and along El camino its 38 du/acre. A developer can play with different mixes of sizes of units – studio, 1/2/3 bedroom.  Then throw in those BMR units and start asking for/demanding 50 feet. [Deep dive in Density Bonus calculations].  Bottomline: We are still at risk of  new buildings downtown Los Altos that are “too big”.

Photo: The PTC rejected lowering height as requested by the DBC report 9 times… Other cities — Palo Alto, Santa Clara — have already had their density bonus crisises. We can learn from them.

1   –  Adopt a local City Version of the State Density Bonus law. It does not reduce the density bonus calculations for BMRs, but it does let a city try to define a menu of incentives/concessions that are more palatable. These are usually automatic and let the developer of a residential project move more swiftly through planning and not go before  city council. [Council member Jan Pepper has been advocating that the City create a menu of Community Benefits that a  commercial project developer could bargain with. This would be quite similar but probably separate from a menu of residential project “density bonus” concessions.]

However, a residential project developer can still go “off menu” and wait it out, hounding planning staff and council to try to get the “sky’s the limit” concession. Crafting that City Density Bonus ordinance will be a lot of work. In Palo Alto the council formed a subcommittee of council members–Regional Housing Mandate Subcommittee. But Palo Alto Council has 11 members!  We have 5. Therefore, it’s either going to be tackled by City staff or another ad hoc committee like Downtown Building and Downtown Parking! We know how that turned out! Maybe a staff temp?

2  –  Downzone R3 Downtown. It looks like the 38 du/acre for R3 is the root of the problem.  How about something like 20 du/acre? If not on El Camino, at least Downtown Los Altos?

Lalah doesn’t know if downzoning the downtown density will tip the City into non-compliance with the ABAG mandated housing goals.Lalah has not been a big fan of  projects which are 100% senior or are 100% low income or 100% both for sociological reasons, but I’m warming up to them. They are the big bang approach.  For example, if the offices on the 3.9 acres at 5150 El Camino were torn down and rebuilt as 100% subsidized housing, we would make rapid progress on the City’s ABAG mandated goals…maybe 200 units there? Gulp!

How Density Bonus works  by Palo Altans for Sensible Zoning

Setting City Policy for Getting Benefits for the Bonus  by Greenbelt Alliance.

This LA Miracle Mile neighborhood is trying to create a historic district in response to density bonus law.