Path Home » MVLA Board may Share Pools with City and Neighbors 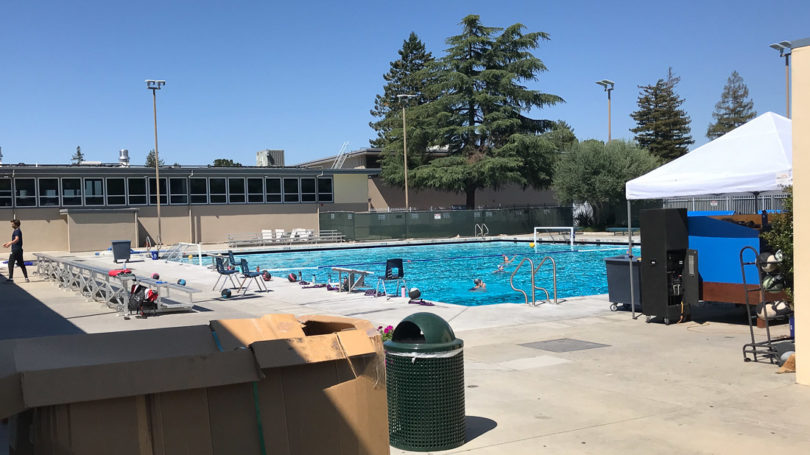 At the Aug. 12, 2019 MVLA Board meeting, a Mountain View High School neighbor – Larry Baron of Los Altos – proposed that MVLA share its two pools with the City of Los Altos Recreation Department and perhaps also with the City of Mountain View Recreation Department.  Barron said, “When I go by the pools, oftentimes they are empty. The pumps are running when it’s unused. Wouldn’t it be nice to share that unscheduled, unused time – like on weekends – with the neighbors?”  Perhaps the City could hire its own lifeguards, obtain extra insurance, and chip in for extra chemicals and wear&tear.

Donna Legge – the brand new City of Los Altos Parks & Rec Director – who spoke at the meeting mainly to introduce herself to the MVLA Board – took the time to also endorse Mr. Baron’s idea of exploring a possible pools sharing arrangement.

MVLA Board President Phil Faillace said the board could agendize the item for a future board meeting.

Casual after meeting chit chat on the outside front portico revealed the fact that the pools are already rented out some of the time to “private” water polo leagues, which are active even in the colder weather.  Some meeting attendees suggested that City Rec department users should have priority over the incumbent private users.  Lalahpolitico:  The private parties have established a PRICE for using an MVLA pool for x hours on weekends and other non-MVLA scheduled times and seasons. This establishes some parameters for negotiation. Larry Baron proposed that MVLA High School District share its Pools with the City of Los Altos. Perhaps the City won’t have to spend $100K to hire a consultant to study how to build a pool somewhere.

The pools sharing proposal comes just in time.  The City Council – at the behest of Council Member Jan Pepper – is expected to consider allocating $100,000 for a consultant to evaluate the feasibility of building a City pool.  That’s a lot of money.  What’s the back story here?

The City of Los Altos has been considering building one or two City pools for at least a couple of decades.

The City used to have a pool.  In the 70’s and 80’s after Covington School site was shuttered as an operating Junior High, the City then rented the old pool there.  But in the late 90’s,  when LASD decided to reopen Covington as a K-6 school and administration center, the old pool was demolished by LASD.

Since then, City of Los Altos ideas have included 1) building two City pools on LASD land – one at Egan Jr. High another at Blach Jr. High and 2) most recently building a pool on the 18 acres Civic Center. In the 90’s the City built two City Gyms, one at Egan the other at Blach, so there is a precedent for City-LASD facility sharing.

Any “extra” LASD land at Egan and Blach land is now used to house Bullis Charter’s two campuses.  Even if  “Egan moved to the Kohls 10th site” and Bullis Charter vacates Blach to consolidate on Egan, LASD has proposed using “extra” Egan land for teacher housing.  That leaves only Blach as a viable City pool site.

In 2008-9, the Splash community – resident advocates for building a new City Pool – succeeded in getting a pool sketched into the 2008 Master Plan…as the last of 4 phases of bond issuance and construction.  In other words, they got the Civic Center zoned for a pool as an allowable use.

Then in 2014, the Splash community succeeded in getting a pool included in the Measure A bond measure plan for a new Hillview Community Center building.  However, Measure A was voted down by a whopping 75% of voters!

Lalahpolitico:  Opponents raised fears that the pool’s operations would not be profitable for a contractor and therefore,  the City would get stuck with subsidizing the annual operations cost of the pools which were to be located smack dab right along Hillview Ave. A majority of the immediate and nearby neighbors were vehemently opposed to the pools, fearing night lights, crowding, traffic, and noise, especially during the summers. Personally, I can sympathize with their concern.  Yes, they knowingly bought a home adjacent to public land that could be upzoned…but IMO a pool is an extreme “intensification of use.”  And put a pool right on top of downtown? I dunno.  Do the cons outweigh the pros? The voters thought so. [Anecdotal evidence from the YES on A election phone banking suggested the pool was the #1 reason for voting NO on Measure A. ]

There are limitations of using these MVLA High School pools for City Recreation.  They are designed for teenagers and older, not for the littlest of kiddies.  The pools are designed with lanes for lap swimming.  There is no really shallow end for kiddies. So this is not a perfect substitute for the pool facilities idea the City has floated in the past. Lalahpolitico: But it feels like 80%.

The sharing proposal comes just in time.  The City Council – at the behest of Council Member Jan Pepper – is expected to consider allocating $100,000 for a consultant to evaluate the feasibility of building a City pool. At the Aug 12 meeting, the MVLA board recognized/commended  Mac McConnell, for his role as the key liaison for negotiating with neighbors about the introduction of after dark sports on the fields at the two high schools. You may recall that nearby neighbors of both high schools mobilized en masse — riled by the prospect of new bright stadium lights and loud public address systems barking… until when at night? See Town Crier Article.

Mac McConnell delivered a sweet acceptance speech profusely thanking other hard-working neighbors who were essential to hammering out a compromise.

President Phil Faillace promised that the MVLA Board will see to it that the Stadium Night Use POLICY they unanimously voted for this summer will be implemented properly. Other MVLA Board Meeting tidbits

It’s the first week of school. Each high school has about 600 entering freshman and about 50 new arrivals in the other grades. [This is not data on total enrollment, just counts of who is new to MVLA and should attend orientation.]

Besides new teachers, MVLA Administration has a new IT Director, a new Special Ed Director, and a new Superintendent – Nellie Meyer.

The last order of business at the meeting was to certify that students were getting their textbooks.  Lalah did not stay for this.

Lalah 2014 article on pools and the civic center possibilities

Mountain View Voice coverage of the stadium lights board policy.

Lalah was pleased to attend my first  MVLA Board Meeting – seeing President Phil Faillace, Sanjay Dave, Debbie Took, Catherine Vonnegut, Fiona Walter.  I hope they don’t do anything too interesting such that it makes me want to attend another one of their meetings! I’m too busy watching the antics of LASD and Bullis Charter!