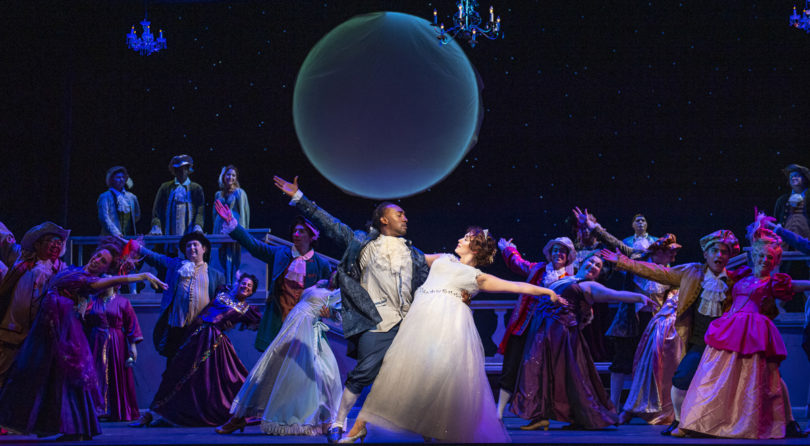 The Prince and Cinderella dance at the ball

If you enjoy local musical theatre, don’t miss “Cinderella” now showing till August 4 at the Foothill Music Theater (Smithwick) in Los Altos Hills.  This version of the story is NOT the stale patriarchic tale of a young, powerless woman being “rescued” from her stepfamily by a strong man princeling. Instead of the original script dialogue by Rogers and Hammerstein, this troupe is using a modern, politically correct “book” by Douglas Carter Beane.

But don’t worry, there is still love, romance, comedy, suspense, and the happy ending we all crave. When we first meet the Prince – just recently graduated from university – he likes to pass the time by hunting down dragons with a slingshot!

This version of the fairy tale focuses on several transformations. Here are three of them. Prince Topher, played by Edward Clark, matures before our eyes from an unformed, youthful prince to a thoughtful king ready to lead his people. Cinderella is transformed from a scruffy, exploited teenager to an adult woman ready to lead her homeland as queen and co-govern with the king. The entire country is changed, transitioning from an old-style monarchy to a new and improved democratic, constitutional monarchy. Jean-Michel – the firebrand anarchist rebel – mellows, discovering that democracy is a good middle road between revolution and monarchy. Cinderella helps her stepsisters and stepmom get ready for the ball and laments she can’t attend.

The show itself is very high energy, the actors are terrific, and the singing and dancing are marvelous. On opening night when we attended – July 19, 2019 – there were a few minor glitches with the sound system and two or three muffed lines. A major plus of this production is an actual live orchestra under the direction of Daniel Feyer.

The young revolutionary and advocate for the poor – Jean-Michel – gives Cinderella a non-fiction book the stepsister Gabriella doesn’t want.

The cast is led by Christina Lea as Ella and Edward Clark as Topher, the handsome prince. Both are outstanding, acting, singing, and dancing exquisitely. Also not to be missed is Juan Castro playing the role of Lord Pinkleton, a combination narrator, town crier, and general keeper of lists. Mr. Castro plays the role to the hilt, hamming it up while using his handbell as a combination summoning device and microphone. Angela Cesena comes close to stealing the show in her role as the kingdom’s crazy, old beggar woman. But Marie has plot surprises in store for you. Plus Ms. Cesena has a voice that trills, booms and carries to the rafters. The ensemble is a whopping 27 actors. Their singing, dancing, and acting are incredibly well-rehearsed, well-timed, and a joy to watch. Cinderella gets her gown…and dances with the prince

This is handled very well. But the most amazing change is when Cinderella is ‘magically’ transformed from a cleaning girl into a white-gowned lady ready for the ball.

Those who remember the old story will be perplexed when this Cinderella leaves the ball with both her shoes. Suffice it to say that the new script has added some surprise elements that enhance the storyline quite a bit. Cinderella easily slips on the Venetian glass shoes as Lord Pinkleton, the town crier, looks on from the far right.

We can only close by saying if the shoe fits, marry her.

The publicity company page and Show Photos by David Allen

The Mercury’s backstory for the production last week interviews some of the actors, if that interests you.