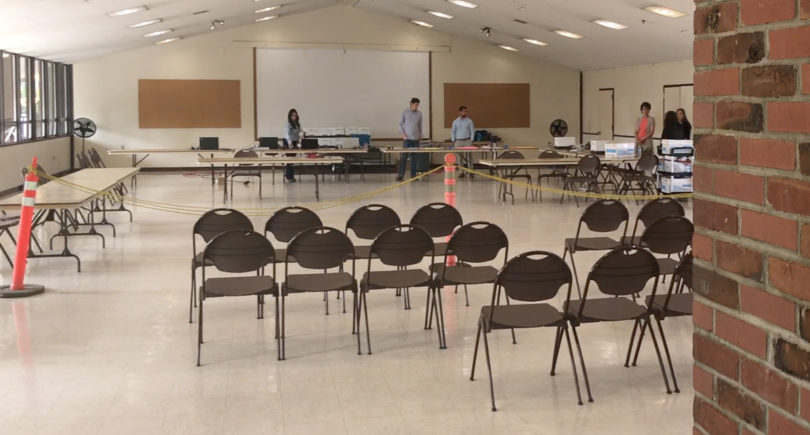 9am - Preparing to count Storm Drain Fee ballots at LAYC

With only a 41% turnout of returned ballots, the naysayers at 55% overcame the yeasayers at 45%.

Lalahpolitico was angling to get the results asap after the count on June 19.  So I went to LAYC at 9:05 am to observe the count. But I was informed the public was welcome to watch, but even so, results would not be announced till the June 25 Council meeting. On June 19 after 9am,  I made this tiny video about my visit.

The storm drain fee ballots are being counted today. You can go and watch…from a distance …at the LAYC building. Sadly no results will be announced until the June 25 council meeting.

On Friday I learned that later in the day of June 19th, someone at city hall had realized the folly of waiting till June 25 to tell people the results. Apparently, the city phoned the results to Mr. Barton at the Town Crier and posted them on the home page of City web site.  And now here they are.

By comparison, in general elections – the November and June ones with lots of races – City of Los Altos registered voters turn out at around an 80% rate. [There are apples and oranges here – in elections the votes are per person, but this fee voting was per land parcel. Sure there are a few hundred people who received more than one ballot because of their real estate holdings. But let’s compare anyway.]  More turnout would probably have helped the yeasayers.

The non-voters were also a kind of vote.  As shown in the pie chart, they were the largest voting block at 59%. “No new taxes, No higher taxes” voters are very good about turning up to vote No on new or higher taxes, fees, exactions, etc. They were the next largest voting block at 23% in the pie chart.

500 more naysayers than yeasayers is a pretty wide margin of victory when the turnout is under 5000 ballots. – Lalahpolitico In 2012 the city extracted around $200,000 a year out of the General Fund (GF) to keep up the operations budget necessary to do the Clean Water compliance certification and maintenance measures required by federal and state law.  In the last budget 2018-19, that amount was approaching $500,000.  Now the city will continue to use the GF to comply.  Many other cities have fees like the storm drain fee.

So because the ballot vote failed, there is no funding source for the recommended storm drain capital improvements.  Will our current council vote to allocate more of the GF to the Capital Improvement Project accounts? To do storm drains?  Or other stuff they think is more important?

Where would storm drain capital improvements rank on the CIP compared to all the other projects certain council members would like to see firmly on CIP? Police Station, Grant Park Kitchen, Halsey House?

Remember folks, there is now $500,000 in the GF we probably won’t be able to spend to spiff up the New Hillview Community Center or add Downtown Vision goodies — when push comes to shove — with the current Mayor. Instead we have to save those $500,000 bucks of GF to pay for the state-mandated clean water compliance …or the Grant kitchen?

See our prior analysis of the  Storm Drain Fee proposal.

See the City Web Page about the Storm Drain Fee and the voting results.