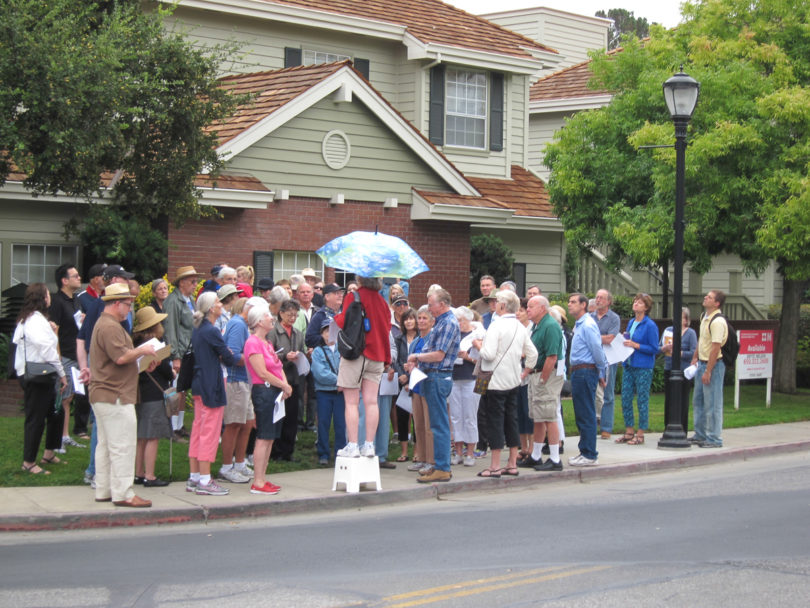 The Downtown Buildings tour led in 2014 by then Mayor Megan Satterlee investigated the First Street Canyon, A citizens committee was formed, recommendations were made, but many remain unimplemented in 2018...

Lalahpolitico: This is an opinion piece authored by Pat Marriott, member of the Downtown Buildings Committee. The council members’ voting records were clarified in a March 6 update below. Author: Pat Marriott was a member of the Downtown Buildings Committee. You can email her at patmarriott@sbcglobal.net

In 2014, residents – as well as some PTC commissioners and council members – were unpleasantly surprised by new development downtown. The Downtown Buildings Committee was formed to fix that.

Zoning changes in 2010 increased height limits in the CD and CD/R3 zones to 45 feet. Resulting buildings, including the 43-foot tall Safeway and a condo on the north end of First Street that peaked at 57 feet, turned First Street into a dark canyon. 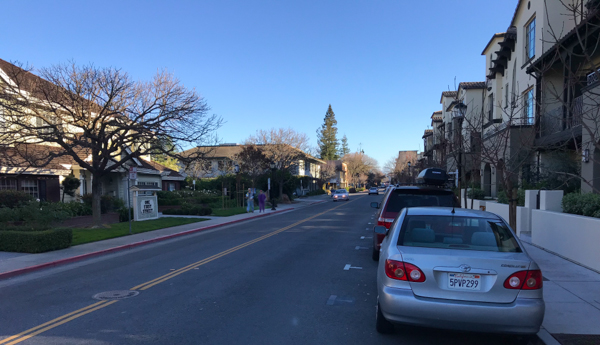 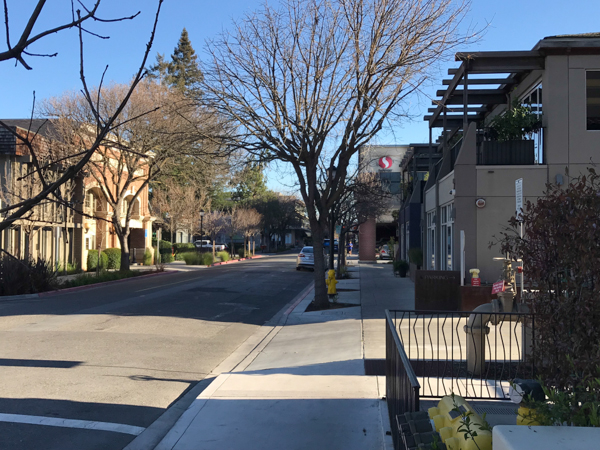 North First First Street. Once past the tall condo building. the older two story and the Safeway parking lot permit the sun to shine through 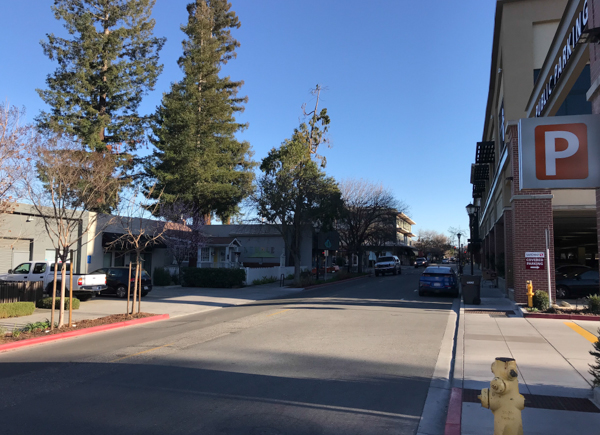 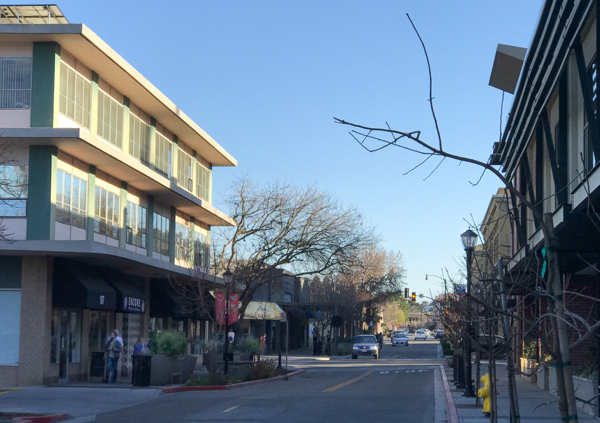 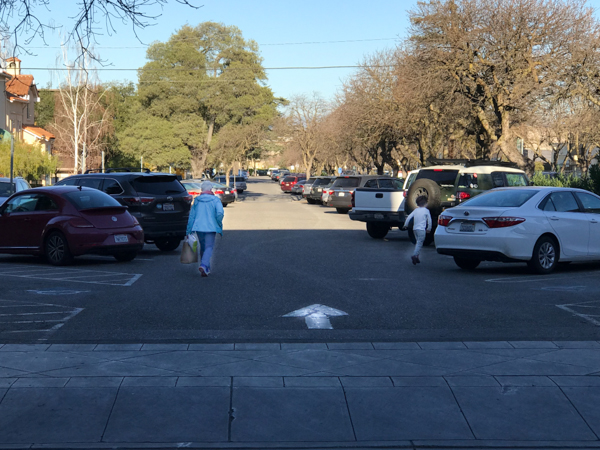 Shade on Parking lot 7 is cast by the Safeway building, February 3:30 pm 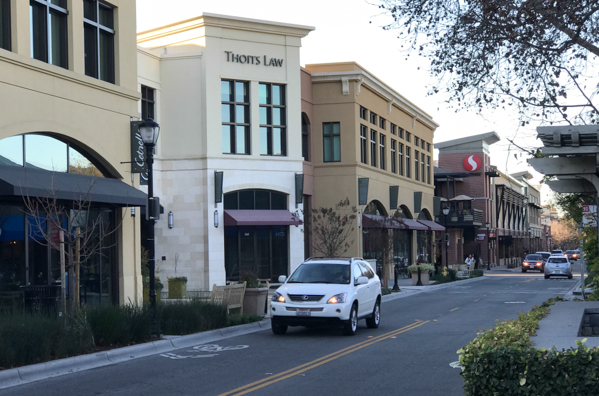 First Street almost at the Main Street intersection The shade from Safeway and Thoits Law is present at 3:30 pm in February

Where were the Heights Lowered? Genesis of the Downtown Buildings Committee

In the summer of 2014, then Mayor and Council member Megan Satterlee initiated a series of downtown walking tours to gather residents’ opinions on recent development.

The Downtown Buildings Committee (DBC) was formed in March 2015 with ten volunteer residents selected by Council. Satterlee became a non-voting member who facilitated, but did not direct, proceedings. 2014, Mayor Megan Satterlee with umbrella leading the “canyon” tour. Condos topping at 57 feet at “tower elements” are not quite finished in the background on First Street. Downtown Buildings Committee members spent thousands of person-hours of studying Los Altos documents and related documents from other cities. They interviewed residents, architects and developers, as well as officials in neighboring communities.

All 24 meetings were noticed and open to the public. Recommendations were reviewed by the Planning & Transportation Commission (PTC). Three study sessions were held with Council prior to the formal Council presentation. Links to meetings, reports and presentation here:

The Downtown Buildings Committee charter was specific. Members were asked to determine

Overall, the objective was to expedite the development process, making it smoother and more equitable for all stakeholders, while resulting in quality projects to enhance our downtown. In short, the Planning Department had too much discretion and developers were not treated equitably.

Figure 4: Statements of Intent from the Downtown Design Guidelines. Lists throughout the document are confusing, being similar to – but different from –Purpose Statements in the zoning code. While Downtown Buildings Committee subcommittees tackled individual topics, the entire committee deliberated and reached consensus on all issues. In the vast majority of decisions, the vote was unanimous.

The 42 recommendations are comprehensive and specific. (See Table below for entire list.) On May 24, 2016, after more than a year of meetings, study sessions and outreach, the committee presented its final report to Council.

At the start of the meeting, Councilwoman Bruins said, “If we agree which items should be turned over to staff, staff is committed to updates and timeframes and – if after a closer look they decide should be different – inform us.”

The most visible and controversial recommendations had to do with height. The DBC concluded the only way to prevent more “big box” construction was to lower heights for the CD and CD/R3 zones:
30-foot max for commercial & mixed-use
35-foot max for multi-family residential

During discussions, Satterlee noted, “This is what kicked the whole thing off. Height & FAR [Floor Area Ratio]. While visioning is going to go forward, I don’t think we can wait. If visioning comes up with a different answer, we can change. I’m fully supportive of moving forward right now.” Council member Mordo: “Ideally, we should have been done with visioning [before considering lowering the heights].”

NOTE: After years of delay, Downtown Visioning is now scheduled to be completed in April 2018.

UPDATE by Lalahpolitico on March 6, 2018: Jean Mordo has ask to clarify Marriot’s account of voting. Via email, all now agree that on May 24, 2016 the DBC report was “accepted” by Council 4 to 0, with Councilwoman Prochnow preferring to recuse herself because she owns property downtown. All 4 gave direction to draft an ordinance to lower heights and to implement the rest administratively. The height lowering ordinance returned to Council Oct. 25 and Nov. 8 for two readings. Prochow did not recuse herself from those votes, because it had become clear that the height lowering ordinance does NOT affect her property’s zone. The vote on both dates was 3 to 2 with Jeannie Bruins and Jean Mordo voting no. END UPDATE. Regarding Bucket 1, Satterlee moved “we direct staff to move forward on all of the above. If they have questions or concerns to come back to council. Complete item 3E: ‘Create a workplan with measureable milestones for each to track progress.’”

At the meeting’s close, Mordo said, “You managed to convince us to adopt those measures, even against the recommendations of PTC, with the force of arguments and passion that you demonstrated.”

Council member Bruins said, “We are committed to forward momentum.”

Almost 2 years later, we have no idea what has been accomplished, other than zoning height changes.

Council priorities for 2017 included DBC (and parking committee) recommendations incorporated into the Downtown Visioning process. DBC recommendations were to be completed and a report provided in July 2017.

At the January 2018 council retreat, City Manager Chris Jordan said they were “completed.”

Completion came as a surprise to Council at the January 2018 retreat. They had seen no report. Jordan said he provided a link to a report in his July 2017 city manager newsletter.

Council noted that was not a good way to inform them and asked for a report – to Council and the public – of what’s been implemented.

Jordan said he would note “what we thought wasn’t important [in the Downtown Buildings Committee recommendations].”

NOTE: In 2016, Council approved the recommendations and directed staff to implement them, not to pick and choose which were considered “important.”

When, where, what was reported?

The September 26, 2017 City Manager’s Update, an email sent to anyone who subscribes online, contained a link to “updated recommendations”:

That table (below), prepared by Jon Biggs in August 2017, flew under everyone’s radar.

It contains DBC recommendations approved at the May 2016 council meeting with notes on “implementation.”

But the key item, “3. E. To ensure that Council-approved Downtown Buildings Committee recommendations are implemented in a timely way, create a workplan with measurable milestones for each to track progress” was never done.

As with many other priorities and projects, Council never followed up on the workplan and schedule. Nothing has been tracked. We have no tangible results.

To say recommendations are “completed” is a gross exaggeration. “Ongoing” efforts are not backed up with completion dates. Several items are said to be part of the Downtown Visioning process, but without details.

In many cases, claims of completion are vague or do not meet the DBC’s intent. For example,

The Downtown Buildings Committee rewrote the existing “Downtown Design Guidelines” to make it clear and coherent. All that’s required is final formatting. This could have been done immediately after Council approval.

The DBC also produced a Design Guidelines checklist. When completed by a developer, it would indicate guidelines were understood and followed. One architect said, “I don’t even have to read the guidelines. I can just go through this list of requirements and check them off. It’s a time-saver.” This would also save time for staff.

The DBC also recommended – and provided – a more detailed checklist for the development application form. Neither has appeared on any applications or staff reports.

Staff implemented this once, for the 40 Main project, prior to what was to be its final presentation to Council. Project developers and architect were not included. Staff claimed the review was undertaken to conform with Downtown Buildings Committee recommendations. But the DBC advised a review with the developer’s team at the very beginning of the application process not the tail end.

Business as usual at City Hall

One can’t help but ask why the planning department never took up the DBC’s offer to discuss and help implement the recommendations. Many of the items were completed by the committee in draft form, thus requiring little effort by staff.

Unfortunately, the Downtown Buildings Committee experience is not unique. An important issue comes up, attention is focused, resources are mobilized and then …

Without detailed schedules, frequent check-points and accountability, many projects and so-called priorities disappear without being completed.

In January 2016, Council member Prochnow suggested city priorities be reviewed at every council meeting. She got no support. Instead, the city manager offered quarterly reports, but even these are rarely scrutinized.

As long as Council ignores its oversight responsibility and staff ignores residents who dedicate their time and expertise to contribute to city projects, volunteers are essentially wasting their efforts.

Why should we care?

How will we ever get development – regardless of building heights – that meets community expectations if our documents and processes are inconsistent and are not enforced?

Does the recently-opened restaurant at 328 Main Street have “village character”? It certainly violates important tenets of our Downtown Design Guidelines and zoning code, e.g., Hiroshi, a new high-end restaurant with a $400 per person minimum, minimum party of 8. Check it out on yelp.com

Do we still care about village character or should we give up on that long-cherished myth? If residents no longer think this is important, then let’s stop the hypocrisy and modify our standards. But if it is important to residents, then staff, commissions and Council should enforce those standards. Regardless of what the ongoing Downtown Visioning project comes up with by summer 2018, we will still need codes and guidelines for developers. Architects, developers and staff agree that checklists are a big help.

To comply with new state housing laws, our documentation will have to be comprehensive and coherent and our processes must be transparent, or there will be consequences.

If staff had implemented the DBC recommendations, we’d be ahead of the game in applying all the new 2017 State Housing Laws requirements for streamlining.

Change is a fact of life. Bigger changes are coming. Right now, we are unprepared, just as we were unprepared for commercial developments back in 2010.

BOTTOMLINE: We need – and we should demand – city codes and documents that are clear and complete in defining our expectations and standards. And then it’s incumbent on all of us to require everyone at City Hall to live up to them.

Recommendations to City Council made May 24, 2016

Presentation to City Council made May 24, 2016 (different from Recommendations)