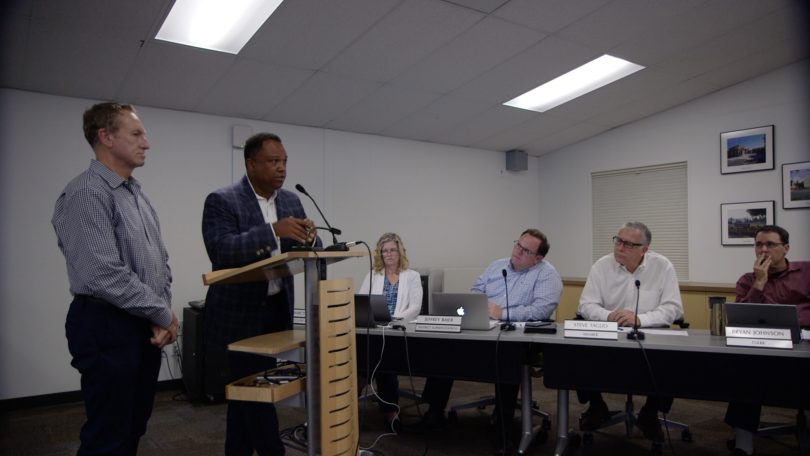 ORGININAL: LASD trustees had been hinting there could be some kind of momentous announcement at the Oct. 8, 2018 Meeting.  Details about the Kohl’s 10th site transaction?  The decision about what school should go there?  Well, none of that happened.

What did happen is that BCS Board President Joe Hurd visited the Oct. 8 meeting.

Hurd announced that BCS is submitting a Prop 39 facilities request application by the legal deadline November 1.

Presumably, BCS staff are busily calculating ‘Reasonably Equivalent’ interior and exterior spaces based on current LASD enrollment data.  And based on the fact the Kohls 10th site is 9.5 acres.  [There is no school use of the 2-acre park nextdoor.]  Some District classrooms and portables at existing schools are rumored to be empty.

And obviously, the mediated negotiation process to forge a new 5-year agreement has reached an impasse. Lalahpolitico: What else should LASD expect but an impasse when they inserted antagonistic ex-trustees Tamara Logan and Doug Smith into the process last November? Who Will Occupy
the Kohl’s Tenth Site?
Trustees Decide Not to Decide.

There was an important trustee task on the agenda for Oct. 8.  Mountain View City Council had asked that when the Trustees appear at the upcoming Oct. 16 council meeting, they present a plan for use of the Kohl’s 10th site.  At that meeting, MV Council may decide whether or not to award the $23M park fund without the Trustees’ promise to build a neighborhood school.

If MV Council does make that no strings attached gift, Lalahpolitico would expect close of escrow and the close of TDRs could proceed quickly. Then finally the public will learn the “cost” of the land to LASD AFTER the transaction closes.  No one gets to weigh in on if it’s too much.  Trustees say the cost, “will be significantly lower than many people think.”  Lalahpolitico: I think it will be higher than I’ve been thinking. Several public speakers at the Oct. 8 meeting opposed the purchase of the Kohl’s 10th site, even for use as a District-run school.  They cited menaces like a liquor store, a cannabis shop and registered sex offenders living nearby as well as homeless and RV dwellers nearby.  Trustees Steve Taglio said those concerns could and would be mitigated with security measures – fencing, security guards, etc.

Trustee Taglio came out publicly as “that at least one”  LASD Trustee who favors using the site for a neighborhood elementary school.

LASD has a stable of partisan NEC residents who will turn up on Oct. 16 to urge Mountain View City Council to give the $23M in park funds to LASD with no strings attached. They will argue that the future community amenities like a shared gym or a track, etc. are worth it.

A possible sticking point is that BCS representatives will probably show up at the Oct. 16 MV meeting to explain that their school runs a 7 am to 5 pm program.  This is very different from the 8 am to 3 pm school hours that seem to prevail at MVWhisman Schools.  So if BCS, or part of BCS is placed there, the 4 acres of school open space may be open to the public only from 5 pm to 7 am on schools day.  In the winter that means open to the public only when it is dark outside.  Are they planning field and park lights for night-time?

Will LASD claim before MV Council that they can cajole BCS into having a program with shorter hours at the Kohl’s 10th site?  Probably not, because LASD is not the boss of BCS. The County is.  What’s more likely is that ex- trustee Tamara Logan will soon be appearing before the County Board of Education to argue why it is good to have BCS cut hours…and why it is good to have BCS reduce enrollment … and why it is good for BCS to have admission preferences for ‘poor people.’ [As the BCS ‘authorizer,’ the County Board of Education can make changes in the Charter’s charter. LASD can’t.]

Lalahpolitico predicts the MV Council will continue to acquiesce to the LASD plea,  “We need to have flexibility.” Council will grant the $23M in park funds without getting any concessions about what kind of school will be placed there.  I hope I’m wrong. LASD Trustee Steve Taglio is termed out. He is the ONE vote FOR a neighborhood school on the Kohls 10th site. He is open to a  redraw of attendance areas. No other trustee seems on board with that. Likely board newcomer,  Sirkay Shali,  is expected to more of a hardliner than Steve – “don’t disrupt existing schools.”

More LASD Delay of Decisions… on the Way

LASD Trustee Steve Taglio – the one known vote FOR a neighborhood school – is termed out after the November election is certified. After January when the new board is seated – there will likely be a possible 5-0 vote to FOR BCS at the Kohl’s 10th site. [LASD candidate 2018 Sirkay Shali, in her roles on LASD committees, has not shown interest in redrawing attendance areas any time soon. Taglio is the only one who talks about changing attendance boundaries.]

It is possible the public may be hearing the following LASD storyline for as long as another 2 or 3 years and beyond. Paraphrasing Trustee Sangeeth Peruri…

The most important thing for our kids is “educational outcomes.”

The Charter school’s enrollment has gone up over the decade.  In the future, it could go up, stay the same, or go down.

Land will not be cheaper then than now. We are buying land now and can build a flexible facility. At different points in time, it could be a k-6, a k-9, a junior high, a middle school, a joint school-community center. Sirkay Shali is a well-liked and well-prepared 2018 candidate for LASD trustee. Unfortunately, she is probably ‘on board’ with the Trustee majority who seem to intend to place BCS on the Kohls 10th site.

Presuming the Kohl’s 10th site transaction closes before February 2019, how can the LASD trustees get away with not deciding anything about anything for up to two years longer?  How can they avoid designing anything definitive for some specific users for so long?

Well, perhaps the one-year CEQA process does not require more than disclosing the maximum number of students that might be there?  Say 1200? Perhaps the Trustees can specify a so-called flexible design? That would let them not decide anything for two years.

Suppose Trustees in the year or so from now have an architect design in specialized indoor and outdoor kinder spaces – little people restrooms. They can explain how these kinder spaces can be transformed for eighth-graders use if we want it to be a middle school some day.  It will be a TRANSFORMER school – fold it this way it’s a robot, then a spaceship, then a gun.   We don’t need to decide.

Will this ‘flexible’ way be an expensive way to design? Or maybe a cheaper way?

Let’s be glad the other four Trustees oppose Trustee Ivanovich’s interest in using a prefab company to assemble a school for the Kohls 10th site.  Ivanovich says it’s faster to build, though not really cheaper.  Lalahpolitico: Yeah, but the political optics are “MORE PORTABLES?” You gotta be kidding me! The LASD long game for BCS
Thrive? Not if we can help it
Survive? Actually, we hope not

Trustee Peruri seems to be implying, ‘”It may take 20 or 30 years, but we can get BCS to shrink and disappear.  At that time, we can make that facility a neighborhood school for you City of Mountain View, or anything else you like. So chill about it. Nothing is final here.”

In 2014 LASD trustees insisted that negotiations be held in public. There were 4 or 5 such public meetings with LAH Mayor Gary Waldeck presiding. Representing LASD were Doug Smith and Tamara Logan. Representing BCS were Francis La Poll and Peter Evans, as I recall.

During the open public meetings, the BCS reps would say from time to time,  “We hope for an outcome where both schools can thrive. We want LASD to thrive, and we hope BCS will thrive too.”  It was more of a question than a statement.  It took forever for LASD Trustee Tamara Logan eventually to be able to choke out the words to the effect,  “Of course, we hope you thrive too.”  Doug Smith was never able to express any sentiment to that effect.  He just could not even fake it.

Thankfully the 2013 negotiations went private and a 5-year agreement was hammered out, after all the considerable LASD political theater and grandstanding.

These two LASD ex-trustees are ideologically opposed to charter schools in general and to this charter school in particular. While they were trustees they tried to locate the BCS in Sunnyvale and on a toxic site near the boundary of the district. Lalahpolitico: There is no intention in their hearts to have BCS thrive in the LASD area. Quite the opposite.  It’s a zero-sum game for them.

Lalahpolitico: Whose idea was it to stop the quarterly meetings of LASD trustees talking directly to BCS trustees and instead to start a formal mediated negotiation process inserting known ‘charter assassins’ Doug Smith and Tamara Logan?  And now LASD has a Prop 39 request landing in its lap by Nov.1, 2018. Lawsuits must be just around the corner. Nice work LASD trustees. Not!