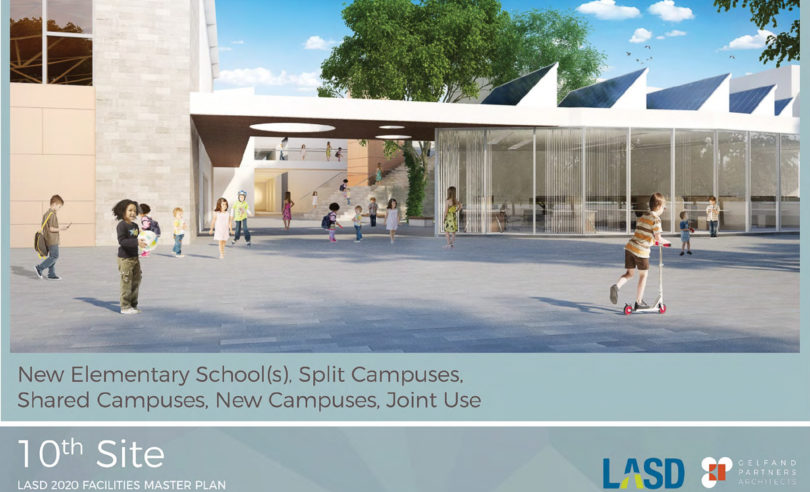 A Gelfand vision for the 10th site. Note the laundry list of uses.

Starting at 6pm Dec. 2, in the Convington School Board Room the LASD Trustees will hear a presentation from Gelfand Architects and staff about the updated 2020 Facilities Master Plan.  This is a study session, not a regular Trustees meeting. No action will be taken.

Several items jump out of the slides which will be discussed Dec. 2.

There are Gelfand Architects provides color renders of a vision for a school on the 10th site. LASD is getting serious about conversion from k-6, 7-8  to the middle school model k-5, 6-8. The updated Facilities Master Plan says there are still more facility needs than funds to pay for them. The district’s bonding capacity is now up from $150M in 2014  to $226M now in 2019, meaning a new bond issue may be coming along.

This article also reports how the membership of the Facilities Master Plan Committee is being stacked with LASD ex-PTA presidents, rather than a broader swatch of the community.

Starting at 6pm, in the Covington School Board Room the Trustees will hear a presentation from staff and Gelfand Architects, about the updated 2020 Facilities Master Plan.  This is a study session, not a regular Trustees meeting. No action will be taken. The Presentation slides are here.

Several items jump out of the slides which will be discussed Dec. 2.  LASD is getting serious about conversion from k-6, 7-8  to the middle school model k-5, 6-8. The updated Facilities Master Plan says there are still more facility needs than funds to pay for them. As homes sell for more and more millions, assessed values are up, increasing the District’s ability to issue bonds.

That means the District could try to raise a new bond beyond the $150M Measure N, namely a new$ 76+M bond.

And there are RENDERINGS of the Gelfand Architects vision for the 10th site! At the regular Nov. 12 LASD meeting, Trustees agreed to delay the decision on the final membership of this new iteration of the Facilities Master Plan Committee till January 2020. Committee meetings might not start up till February 2020.

The membership that was proposed Nov. 12, 2019 for the newest Facilities Master Plan Committee was criticized from both sides.

BCS supporters said 3 or 4, not just one BCS person should be included. Also, they noted the absence of non-parents on the committee. Previous LASD committee volunteers from the broader community,  like John Swan and Matt Pear, were explicitly excluded. It is claimed the group was “stacked with LASD ex-PTA presidents.” And if LASD could include a number of administrators on the FMPC, why couldn’t BCS include one? The application process was not transparent. Only the applications of successful applicants were shared.  We don’t know who was rejected unless they speak up about it.

Trustee Vladimir Ivanovich was staunchly opposed to giving more representation to BCS or any other groups.

He said, “Every person on the Facilities Master Plan Committee should have the long term best interest of LASD in mind.  I am okay delaying the vote, but I do not want who is on this proposed slate.”  Ivanovich was apparently referring to Jill Jene being listed as the BCS rep.  Trustee Jessica Speiser endorsed his objection, saying she preferred ‘Ann Waterman’ as the single BCS rep. “Try somebody new.” Ann Waterman Roy is a former BCS boardmember. Her BCS board term ended in June 2019.

Proposed Roster as of Nov. 12. TBD in January. Lalahpolitico: Jill Jene has deep knowledge of the LASD Facilities and the BCS situation having been a member of the first Facilities Master Plan Committee FMPC  in 2014-15 and more recently of the 10th Site Task Force, where the idea to Move Egan to the 10th site was hatched by the rep from Mountain View – namely by MV Council Member Margaret Abe Koge.