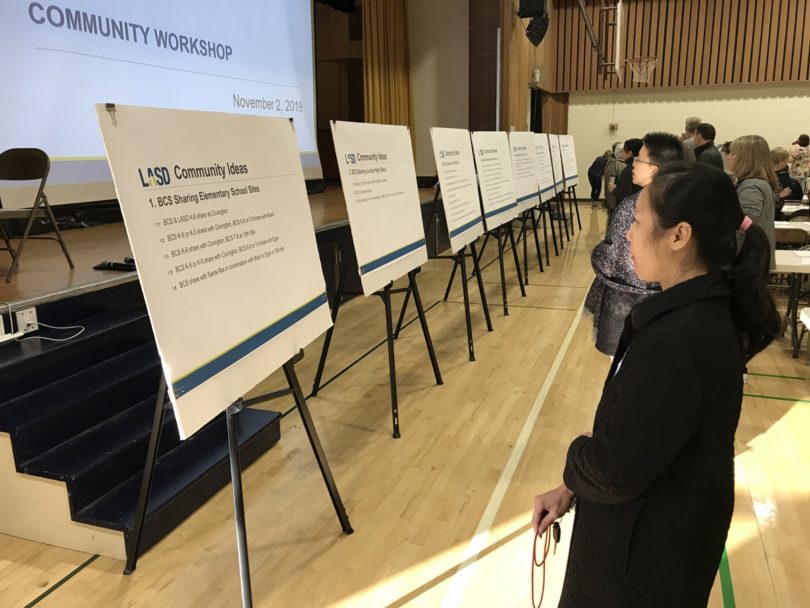 demand a BCS enrollment rollback from the current 1111 to 900

reject virtually all other ideas

The article includes a .pdf for the voting outcomes at the Nov. 1 workshop. It also has materials to help you prep if you plan to attend the Monday Nov. 4 workshop at Blach MPR. Register starting 6:30 pm. Polling starts 7:00 pm. But late attendees are aparently allow to jump in and vote, at least on the rest of the items.

Activist Anti-charter group’s LASD voting guide here  .If the group takes it offline, let Lalah know.  I have screenshots to show that 8 ideas were supported, while the rest of the 56 were rejected. Clear evidence of bullet votes. It’s not illegal, but it sure violates the purpose of the community engagement.

Image: Excerpt from How to Bullet Vote
and Hobble the BCS Program
a ‘Polling Guide Here are some highlights from the Nov. 1 workshop. 77% or participants were of the age likely to have children in the home. The MIG consultant says this is typical for school topics.

Before voting on the 56  ‘BCS Ideas’, particpants were asked if a BCS enrollment cap should be part of the upcoming negotiations for a long-term solution. It looks like some BCS parents and ‘friends’ are ok with some kind of an enrollment cap being part of a compromise.

How Charette ‘BCS Ideas’ were streamlined

BCS Ideas were collected at two charettes last month. Ms. Chaplick, the lead MIG public engagement consultant, explained that they decided not to cull any ideas. All they did was try to reduce the redundancies.  They did not rank ideas by popularity or mentions in any way.  Instead they organized ideas into 6 groups for a total of 56 ideas.  Lalahpolitico:  That seems very fair. But it sure was a tedious voting process on Nov. 1. No charette ideas were culled. All were included, just with redundancies reduced. Lalahpolitico: Even ideas that are illegal or unaffordable are included.

For each of the 56 BCS ideas, Ms. Chaplick took from 2 to 3 minutes to allow participants to use their clicker to vote — A) fully support … to E) not support at all or  F) abstain. Lalahpolitico: You can see from this .pdf   – which includes most of the voting results – that bullet voting by both ‘sides’ prevailed.

Late attendees were allowed to register and vote.  Total votes at the beginning were 203…but by an hour into the voting, had grown to 231.  So on Nov. 4 go late if you have to.

Lalah missed collecting a few votes. You can also use this same .pdf as a voting guide as you go  PREPARE to Monday, Nov. 4  Workshop, 6:30pm sign in, 7pm start at Blach Multipurpose Room.  There is a right hand column in the .pdf where you can pencil in your  choice, A B C D E F.  Lalah is not telling you how to vote. If you voted on Nov.1, please do not show up on Monday Nov.4  to vote again!

The MIG consultant will probably be getting the final results to the LASD board pretty quick.  The data collection is automated because of the clickers.  All they have to do is run the data through a cross-tabs program and pretty that up.  MIG expects to crosstab the voting by age and by children enrolled at LASD/BCS/both, etc.

Will there be results that jump out from the upcoming MIG analysis of the all the votes? Lalah: besides the total polarization of the vote! Perhaps detestation of ‘sharing.’? Perhaps hypocrisy about segregating the NEC students?

LASD will likely share the MIG consultant’s final results quite promptly with BCS.  BCS board members have been invited to observe at the charettes and workshops.  Lalah saw BCS board members Joe Hurd and Andrea Eyrling at the Nov. 1 Egan workshop.

Lalah has corrected a page from LASD Workshop info pack.  LASD’s reporting of the size of Covington is misleading. Including the administration, there are 15.4 acres of LASD owned land.  Previous City Councils of Los Altos have been willing to consider school use of the 3.0 acre Rosita Park during the day. That would be 18. 4 acres total. Note that Covington is 15 acres when the administration offices are moved…such as to Egan School. And Covington is 18 acres if an agreement is struck with the City for use of Rosita for Phys Ed  during the school day. Past city councils were supportive of the idea.