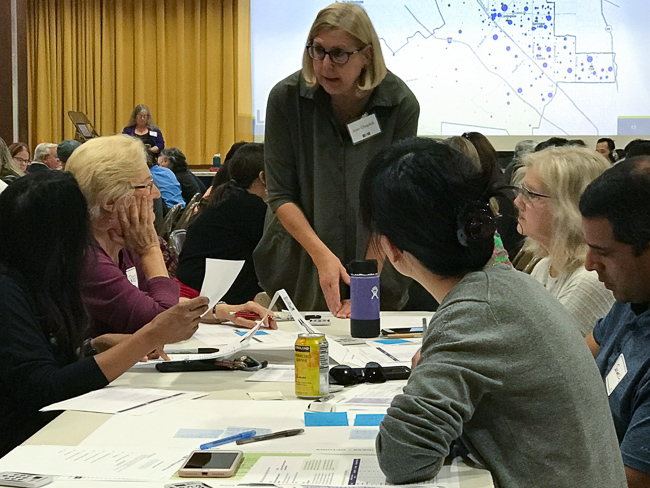 Attendees are expected to have an opportunity to ‘vote’ on a shortlist of solutions for BCS.

The MIG public engagement process started out five months ago with hope for enlightenment and compromise. See here.  But since then the grassroots agitation for statewide anti-charter legislation and local organizing by Danielle James and Peipei Yu among others has fired up many emotional people. The two charettes last month attracted over 500 people.

Today, Peipei Yu in an email to her ‘list’ on change.org, seems to have advance knowledge that the Nov. 2 and Nov. 4 workshop participants will be invited to rate their degree of support for a particular BCS solution on a  5-point scale or to abstain.

Although Ms. Yu seems to have advance knowledge of the rating scale, she says she does not know what the shortlist of BCS solutions will be.  She speculates on what the solutions might be, and she explains how she will vote, and why you should vote her way.

As Ms. Yu related in her email — and I agree — it’s been more than a bit unsettling to hear folks at the two charettes last month advocating for sparing their particular school by choosing another particular victim instead.  Instead she urges solidarity, hang together.

Peipei Yu writes:
No neighborhood schools closed: Closing any school puts all schools at risk. From my perspective, any level of support (“fully”, “somewhat”, “neutral” or even “somewhat unsupportive”) for closing down any school puts every school at risk. In just the past couple of months, I’ve heard calls for closing Egan, then it was Covington, and then it was Santa Rita. There have also been calls for Almond, Gardner Bullis, Oak, Loyola, Springer, Blach. If we show any level of support for closing down any school, it means you’re giving the Board a message that closing down a neighborhood school could be okay. This means all schools are vulnerable. If I see any school as an option to be closed down, moved, shuffled around, there’s only one choice for me: “(E) Do NOT support the idea.”

In other words, participants should not respond with how they truly feel about any of the schools, but rather just bullet vote NO, NO, NO. The MIG consultant explained that for school topics, it is common for 70% of charette/workshop participants to be between the ages of 36-54 years old. They are current parents – some from LASD some from BCS

There are only two solutions – assuming they are in the shortlist – that get her YES Vote.

Ms. Yu claims that BCS has stated in public that they have never declined the 10th site/NEC because it was never offered to them. [Lalahpolitico: Technically there never was a formal Prop 39 offer of Kohls, but this must have been a sarcastic remark by a BCS board member]. In truth, BCS actually stated in LASD’s 7 page fact sheet that is online and was printed out at charettes and probably will be on hand at the workshops starting tomorrow…it’s not in favor of being placed the 10th site.

BCS is the most geographically diverse public school in the District and should be optimally accessible to those throughout the District. As such BCS is not in favor of (1) placement on the periphery including placement at the current proposed 10th site (either as a single site or a second site split by grade level) and (2) a tenth site neighborhood preference. BCS should be centrally located in the heart of the community since it draws families from all across the district. – BCS Board

How should a ‘friend of BCS’ vote at the workshop?

Now Lalah is not advocating doing this, but you can see the response to Ms. Yu’s tactics would be to bullet vote the opposite.

So for all ideas that “close” or “move” a school and give it to BCS, vote YES A) Fully support idea.

So for the ideas of Place BCS or part of BCS on 10th site/ NEC, vote NO E) Do not support the idea.

So for the idea or ideas similar to “Keep BCS split on Egan and Blach”, vote NO E) Do not support the idea. Egan Charette in October. Here was the template for collecting each table’s ideas. They started wih 13 ideas from LASD, but could add their own. They were to write in the rectangular box OR attach a post it note.  So there was unlimited pre-voting at the charettes. One person could attach several notes, while another might just attach two. Some people seemed to join tables of their choice…or changed tables after registering and being ‘randomly’ assigned to a table.

This call for bullet voting undercutting the MIG workshop process is one more outrage on top of a shameful official LASD propaganda campaign that started officially on Sept. 10. The Trustees signed a hit piece letter they apparently did not write and sent it to the SCCBOE cc:ing 12 top State elected officials.  The letter regurgitates content appearing on the private rabid anti-charter website needanotherlook.com.

This Trustees’ letter is a 17-page screed that insults the Santa Clara Board of Education performance as the charter authorizer.  It uses the word “discrimination,” 40 times as if that would make it true that BCS demographics are not a result of the lottery process and parental choice behavior. It called for a “desegregation” plan. Lalahpolitico: Wow, trivializing black American history with this comparison. Shame, shame.

President Dewan of SCCBOE wrote a 10-page smack-down response on Oct 2.  I agree with Dewan there are so many mistakes/misstatements in the Trustees’ letter, it’s nigh impossible to speak to them all. She does point out that it is a lie that charters were created solely for the purpose of serving low income and underachieving students. She points out that charters are supposed to ‘reflect the demographic composition of the area served’ but that does NOT MEAN NUMERICALLY MATCH the composition of the entire area.

Dewan does go on to agreed to investigate all of LASD’s allegations, but LASD should send her the evidence it claims to have…by Oct. 23.  She also asks BCS to respond to the allegations. Lalahpolitico:  There is no news on delivery of this ‘evidence’  so far. But with this dog fight, LASD was successful in needling BCS into voluntarily dropping its stated plan to reinstate a LAH admission preference next year, something BCS probably had hoped to use as a bargaining chip for better facilities.

This .pdf of the 17-page LASD screed letter has the word discrimination (and similar racially charged terms) highlighted in yellow.  Highlighted in pink are other types of stinker words and phrases.