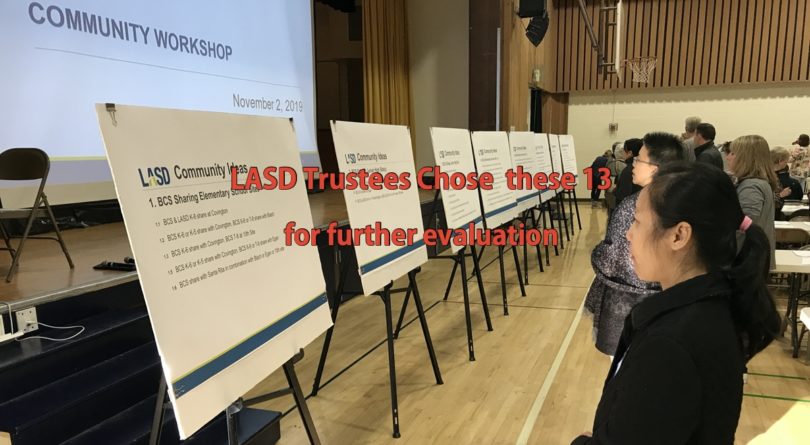 LASD Trustees chose 13 out of 55 BCS ideas for evaluation

At the January 27, 2019 Board meeting, after a meandering discussion, Los Altos School District trustees eventually agreed on a way to winnow down the 55 BCS IDEAS explored by the MIG consultant engagement workshops last fall to just 13 ideas now. They decided to focus on the ‘voters’ various top favorites – namely the highest-ranked ideas of the main voter  ‘subgroups’: LASD parents, LASD residents, BCS parents, and MIG consultant Janet Chaplick!

The full MIG report about the votes – a very good report – and featuring complete tables for all 55 ideas – is about 32 pages long.

Here we have culled the top 10 ideas vote data from that MIG report, the data that is most relevant in explaining how the Trustees came up with their 13 ‘BCS ideas’.  We hope this saves you time.

Of the 13 chosen ideas –  5 long-time ‘good’ ideas have survived the  Peipei Yu/ Sangeeth Peruri effort to eliminate all ‘BCS ideas’ that were not the 10th site. Hurrah for that.

The subgroups whose IDEAS mattered to LASD Trustees

There were a total of 965 workshop voters across all the workshop events. Their ‘relationship to the district’ is portrayed in this MIG summary data about the ‘subgroups’.

‘Other’ – a category whose opinions/votes were dropped – but are included in MIG TOTAL votes –  includes
Parents of private school students 0.70%
Parents of students in multiple school types 6.65%
Other (or did not state) 1.63%

In other words, over 8% of opinions were dropped By MIG and Trustees from substantive consideration during the “BCS Ideas” winnowing.

It is unfortunate that this question about a “voter’s” relationship to LASD  was not more fine-grained. The resulting bias runs against ‘ideas’ popular with BCS supporters. – Lalahpolitico

A better classification here would have been to distinguish between ex LASD parents vs. ex ‘alternative school’ parents vs. the childless. Families who historically used LASD for 100% of family child schooling may ‘think different’ than those families who have had experience with alternative schools for at least some of their child schooling. Opinions of the childless residents could be anywhere on the spectrum.

Dropping the votes of the subgroup ‘Parents of kids attending multiple schools types’ understates the community support for ideas popular with BCS parents. Most of these people have first-hand experience with non-LASD schooling – including having at least one child in the family who attended BCS.

But Ms. Chaplick is probably right that these data definition issues ot the “others” subgroup do not matter materially to our political situation. So on with it. -Lalahpolitco

Table A: Winner Ideas are…
…the 13 BCS Ideas that Made the Trustees’ Cut Above are the 13 BCS ideas culled by Trustees from the 55 at the workshops which will now be further evaluated by District staff. These are the LASD trustees’ choices for a deeper dive, for developing ‘info’ that will be passed onto the reconstituted Facilities Master Plan Committee in a month or so.  Labels ‘one, two, three’, etc. in the columns denotes the rank of that idea in that specific subgroup’s top 10 favorites table. See below for those groups’ tables 1,2,3.  The … ellipsis in a column denotes that idea was not in the subgroup’s top 10 favorites table.

You can see that 8 of the LASD Trustees’ 13 BCS ideas come from the LASD parents subgroup and the Residents subgroup.  If you look at the complete MIG report, you will notice that the two groups’ choices are often correlated, move in tandem, whatever you want to call it. However, the residents’ fervor is about 20% lower than that of LASD parents. Why?  Probably because the stock of former BCS parents who are now just “Residents,” no longer parents,  is growing probably amounting to about 20%. BCS has existed for somewhat over 15 years.

You can see that 3 of the LASD Trustees’ 13 BCS ideas come from the BCS/Chaplick subgroups.  Chaplick’s list adds another 2 additional ideas.

So a total of 5 non-10th site ideas have survived the  Peipei Yu/ Sangeeth Peruri effort to eliminate most ‘BCS ideas’ that were not the 10th site. They used aggressive voter mobilization, told voters how to vote (a voter guide for each of the 55 ideas), recommended bullet voting and no compromise. Instead of education, they offered mobilization to get out the vote for placing BCS on the 10th site and nothing else. Period.

You can see that ALL 10 OF THE TOP 10 were variations of the idea of stuffing all or part of BCS on the 10th site. Only 4 of these 10 ideas also involve LASD providing any kind of education services at the 10th site – LASD k-4/5 or LASD magnet also squeezed in at the 10th site.

Per LASD Superintendent for Business Randy Kenyon, the California Department of Education has a limit of 900 students on a site the size of the 10th site (9.6 acres). Current BCS students number around 1000 now. NEC residing LASD students in k-5/6 grades number around 400 students now.

The votes of this Residents subgroup – perhaps one not defined ‘perfectly’ by MIG – to some extent mimics the preferences of LASD parents. Perhaps Because 70- 75% of “Residents” are ex- LASD parents? But they may be older and wiser than when they were parents,  and their fervor for stuffing BCS on the 10th site -no matter what – is somewhat lower. These are the top 10 BCS ideas among the subgroup – BCS parents. They ask for  a single site at any of the 3 junior high sized sites – Egan, Blach, Covington. It is apparent in the LASD and Residents columns of the table , that the community polarization shows very clearly. The LASD parents column say No No No to any idea that is not moving BCS to the 10th site.  Residents without LASD k-8 children agree with No, No, No,  to a certain extent. Why, because some are former LASD parents. Some are even former LASD teachers.

The interesting row in Table 4 is row 4.   One-quarter of Residents support placing BCS at Covington and opening a LASD k5/6 neighborhood school in NEC at the 10th site.  We presume this involves closing Covington Elementary and redistricting those students back to their 2001 attendance areas – Springer, Loyola – plus ~200 to the new NEC 10th site school.  About 200 students at Covington commute from the Crossings area in NEC and would enjoy the new 10th site elementary school!

Ms. Chaplick remarked during the Jan.27 LASD Trustee meeting that when looking at the summary of all votes,  there were abnormally fewer tallies in the 30 to 60% support ranges. [Lalah: That means there was not much ‘education’ and moving towards a shared compromise going on.]  She cautioned the Trustees against putting too much weight on the ‘apparent will’ of the majority, ignoring minority stakeholders – aka BCS.

Since there was no middle ground in the tally results, she lowered her ‘standards’ when searching for possible ‘compromise ideas’ and searched for best ranked BCS ideas that also had at least a  5% support level across the 3 subgroups – BCS, LASD, Residents.  Here is her entire Table 18 from her Report, which the LASD Trustees seemed to assume was presented in Chaplick’s rank order. MIG Joan Chaplicks table recognizing minority stakeholders, and looking for glimmers of support from other subgroups

The 10th site was purchased just before Xmas.  This was AFTER all the workshop votes, so many of the workshop options that assumed no 10th site and were tossed around in the voting might not be relevant now.

Lalahpolitico: Clearly the reality is that now that there is a 10th site, it is a good idea to do something useful with it!

Lalah wanted to get the list of the 13 ideas chosen by the Trustees out to the public asap.  These are ideas that will be fleshed out by staff over the next month. Then they will be part of the deliberation of the reconstituted Facilities Master Plan Committee. The night of the meeting, Granicus videotaping or at least the video streaming was not working, so the news about the 13 won’t get out as fast as normal.

There is more to say about what transpired at the meeting –

1) At the urging of Trustee Steve Taglio, trustees rejected the idea that a “BCS idea” be evaluated for its likelihood of resulting in a medium-term agreement with BCS, [Lalah: so that must mean a willingness to do annual Prop 39?] ;

2) There was a unanimous agreement by trustees to move to the middle school model after 2 years of planning, [Lalah: Trustees remarks seemed to imply… ‘unless BCS foils that somehow.’ ]

3) Ex-trustee Sangeeth Peruri spoke in public comment. He claimed a small minority had interfered with the polling… that BCS fixed the MIG ‘votes’, even though it was Peipei Yu/Sangeeth Peruri that interfered and  fixed votes – aka “told people how to vote.” Peruri claims that BCS held education sessions for parents – where some trustees and parents explained pro and cons of various ‘BCS ideas’ and that amounted to interfering. BCS parents claim they were not told how to vote; they were not issued sample ballots marked up with ‘correct’ votes!