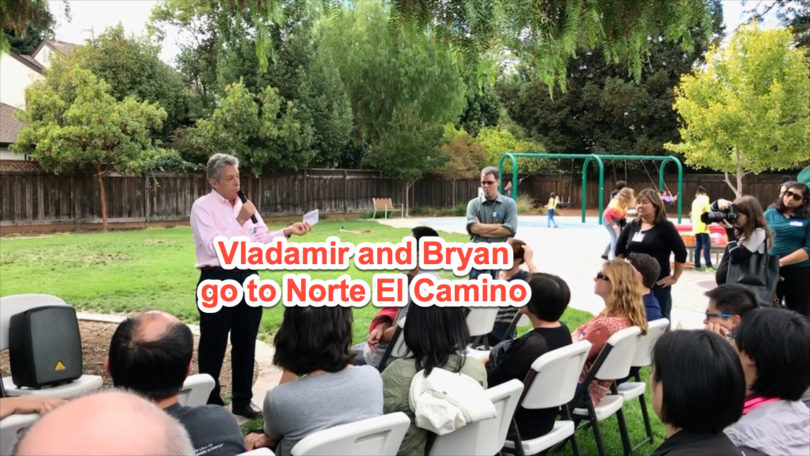 Kohls 10th site was the subject of discussion. About 40-50 dropped in.

Presenters included Mayor of Mountain View Lenny Siegel,  Council Member Margaret Abe-Koga and LASD trustees, Vladamir Ivanovich and Bryan Johnson. There were over a dozen questions or comments from the public about the Kohls 10th site. A 2018 candidate for LASD trustee – Ying Liu – made comments about the traffic impacts of a neighborhood school vs. BCS on the Kohls 10th site.

The audio is not nice, but it is INTELLIGIBLE. A neighbor brought a portable public address system, thank goodness.  If not for that, there would be no audio record of the event. You will hear traffic on the street and the sounds of children playing.

The entire video of the event is 50 minutes. You should hunt around to topics of interest. Below are approximate times/links to the more interesting comments/questions. The first part of the video consists of Trustees Ivanovich and Johnson providing a summary of the 50 slide report that was presented for over an hour at the Sept. 24 board meeting. They invited attendees to go read it!

19:00 minutes – a public question about adding 6th grade to Egan and Blach campuses. Why not do this at the same time as deciding about the Kohls 10th site. The trustee blames BCS presence at those campuses for preventing this change to the Lasd program. Lalapolitico: yet in 2014 Gelfand prepared concepts for Egan & Blach WITH BCS still on those campuses.

If it’s a neighborhood school at the Kohls 10th site, where will the attendance area boundaries be…

Is there a traffic study of the Kohl’s 10th site under various scenarios?

If Egan moved to this side of El Camino, it would create a holistic feel for our neighborhood.

Does the Charter School have to agree to the assignment to the Kohls 10th site? Trustee Ivanovich sidesteps. There was standing room only at the start of the ‘outreach’ event. Del Medio Park, Sept. 30, 2018

Trustee Ivanovich extolls the neighborhood school model and seems to criticize BCS for being a ‘big school.’ [Lalahpolitico: But the ‘big’ is split in two across Egan and Blach…right?]

LASD Trustee Candidate 2018 Ying Liu on traffic impacts on the Kohls 10th site as a neighborhood school vs. a BCS school.

Mayor of Mountain View Lenny Siegel on his ideas for moving the anticipated traffic from the San Antonio area offices, housing and yes, from the schools on the Kohls 10th site

“worst is for the littlest kids to cross the big, big street”

Little, little girl says keep Egan where it is. “In a couple of years, I will walk there with my friends.” [Lalahpolitico: Ice cream cone from mom afterwards?]

Good news for Showers Drive area residents!. Finally, finally, finally, there will soon be a regular crossing guard at Ortega and El Camino – on the Los Altos side –  that you have been asking for for a very long time. [Lalahpolitico: So no need to wait till 2020 and a new school at the Kohls 10th site  for a safer route to your school.] Per Trustee Bryan Johnson