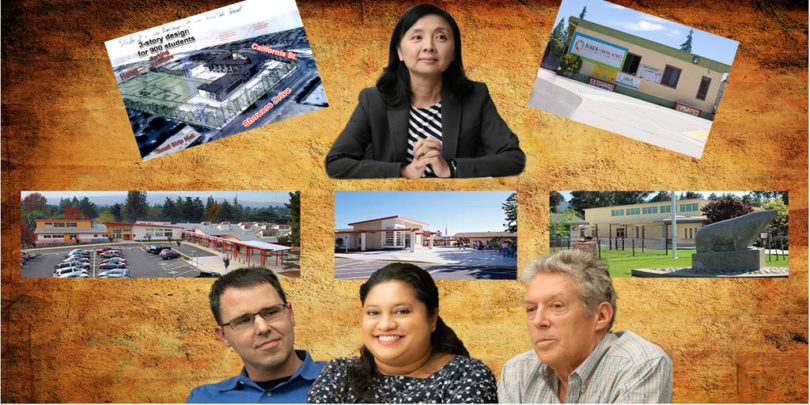 Another couple of years have elapsed and here is another Los Altos School District LASD Trustee election 2018. Yawn! As usual the California Teachers Association (CTA), the PTA, the Los Altos Educational Foundation (LAEF) as well as current and prior trustees colluded to line up their preferred candidates. This year that lineup is from the right to left… Vladamir Ivanovich, a 4-year incumbent, “newcomer” Shali Sirkay (she has been groomed for her new role through a PTA rotation and by LAEF as well), and  Bryan Johnson, a 2-year incumbent.

Lalahpolitico: What the powers that be seem to look for in an LASD trustee election candidate is 1) steely determination to NEVER redraw school attendance areas, 2) a light touch on the negotiation of teachers’ contracts, 3) occasional creativity in devising new ways to make the BCS experience less attractive for BCS children, BCS parents, and the BCS board.  [Think Wiley Coyote and Road Runner]. Oh, and the LASD trustee election candidates should have been active in PTA wherein they make at least over 500 contacts. And finally, of course, they are personable and reasonably well-spoken.

What do Voters Care About?
– BCS Facilities Solutions

The ONLY substantive issue facing LASD is the ‘Reasonably Equivalent Facilities’ issue surrounding the ten-year, long-simmering tension between Bullis Charter School and the Los Altos School District. A lot of non-BCS parents just don’t care about the outcome, just so long as their life doesn’t get changed by having to change attendance areas.  A lot of non-parent property owners seem to think that if BCS “gets” their local school, their home’s property value would decrease. [Probably the opposite].

Yet during the recent election forum events, the three vetted LASD trustee election candidates entertained us with talk about English Language Learner programs, Free and Reduced Lunch programs, and more equitable Educational Outcomes for the most disadvantaged students among us.

Lalahpolitico: I have always felt all this quest for a ‘more perfect equity’ is just a great deal of hypocrisy. It is used to buttress the LASD trustee election candidates’  theory – or rather their ideology – of the “superiority of the neighborhood school.”  It is used to explain why a new 10th school attended mostly by Mountain View students would be a bad thing – their school’s test scores/educational outcomes will be lower than otherwise is the claim.

LASD is a deviant among Bay Area districts sticking with this ‘neighborhood model.’ For example, Saratoga does not guarantee attendance areas. Trustee Ivanovich says he would rather be thinking about curriculum than facilities.

FYI LASD’s educational program – books, curriculum, teacher training, ELL, FRL, etc. – is chosen by the LASD staff…who are career educators.  The LASD Trustees have very little to do with driving the program; they may rubber stamp it at times.  So I was personally dismayed when LASD trustee election candidate Ivanovich said, “I wish I could spend more time on curriculum and much less time on facilities.”  Frankly, our LASD career educators don’t know much about facilities because that is not their specialty – it is exactly on facilities planning where the staff needs help, advice, etc. from the Trustees.  Being a trustee is not supposed to an opportunity for the Trustees to learn about the ins and outs of the educational industrial complex.

In 2016, the alternative LASD Trustee election candidate – Tanya Raschke – came within 500 votes of winning a seat. [Read about the results by precinct here.”Did your LASD neighbors vote for Trump.]  The alternative candidate this year is Ying Liu.  Raschke had the advantage of residing in Mountain View and had attended some District schools and PTAs before switching to BCS.  Liu resides in Los Altos Hills and has very young ones only at BCS.

Actually all other recent ‘alternative’ candidates  – Swan, McClatchie, Aaronson, Raschke – had direct volunteer experience with one or more District schools and usually District volunteer committee experience too, in addition to volunteering for BCS.

Lalahpolitico: I’m voting for Ying Liu because she is focused on the FACILITIES PROBLEM. She can easily learn to rubber-stamp the curriculum program that our competent staff – Jeff Baier and Sandra McGonagle -propose.

If Ying just does not float your boat, another #resistLASDk8trustees option is to cast zero votes, not 1 or 2 or 3 votes in the LASD election. When you leave the LASD ballot blank, the drop-off of in participation will be noticed! Lasd staff – McGonagle and Kenyon are very, very sure that underprivileged students would not do well at NEC neighborhood school. NEC kids should stay split up across 3 k-6 schools as they are now.

At a recent LASD board meeting, Superintendent for Curriculum, Sandra McGonagle announced the program was off to a good start for its second year. What is it? Why is it needed?

In California, teachers get tenure after their second year.  It is rather uncommon for a tenured teacher to change school districts after year 5. Thus over the years, a good teacher can become a not so good teacher…inspite of summer ‘development’ and other training perks like getting a masters degree in education.

Lalahpolitico Theory: Why is there a steady flow of students at most grade levels from LASD to BCS and occasionally back?  Kids can be very unhappy with a particular teacher assignment from one year to the next. When your kid is miserable with their current teacher, you look for a change because you the parent are miserable too.

Rumor is that there are a number of Lasdk8 teachers who are notorious for being subpar and for making kids miserable. [To be clear, this is probably the case in ALL California public school districts.]  In a non-union, non-tenure environment, such as a non-CTA charter,  such teachers would be helped out the door. AKA Bullis Charter.  That just can’t be done in public school districts.  The teacher hangs on and on and on. Hence, the BCS alternative program exists and thrives…and the LASD coaching program trys to fix teachers with long-term problems.

Lalahpolitico: I know it sounds harsh to thrash the union…but I’m for the kids. I don’t see why the union can’t do more to help with this subpar teacher situation. There should be an exit.