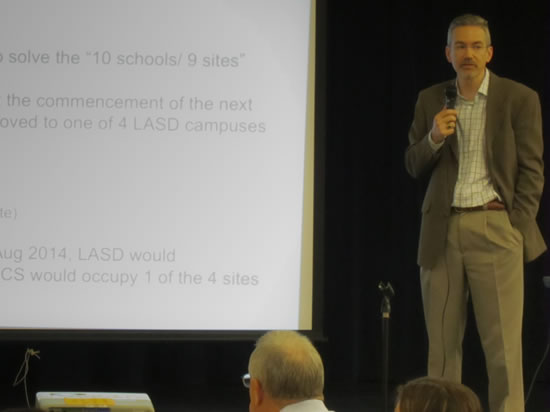 A blast from the past circa 2012. We lead with a ‘video’ of former trustee Doug Smith presenting a ‘tentative long-term agreement’ with BCS. In this rare footage of LASD you can hear that Bullis Charter School would have received one of the elementary campuses – it would ‘close a neighborhood school.’ The idea was not well received by LASD parents.

This shot in the video of the audience in 2012 looks oh so much the same as the recent brouhaha over the ‘Move Egan to 10th site’ proposal. The audio is cinema verite.

RELATED WRITTEN POSTS
about the 2012 Meltdown

Recent newcomers to Los Altos, North Mountain View, and to Los Altos School District are not aware of the history of LASD vs. BCS strife that wracked our town.