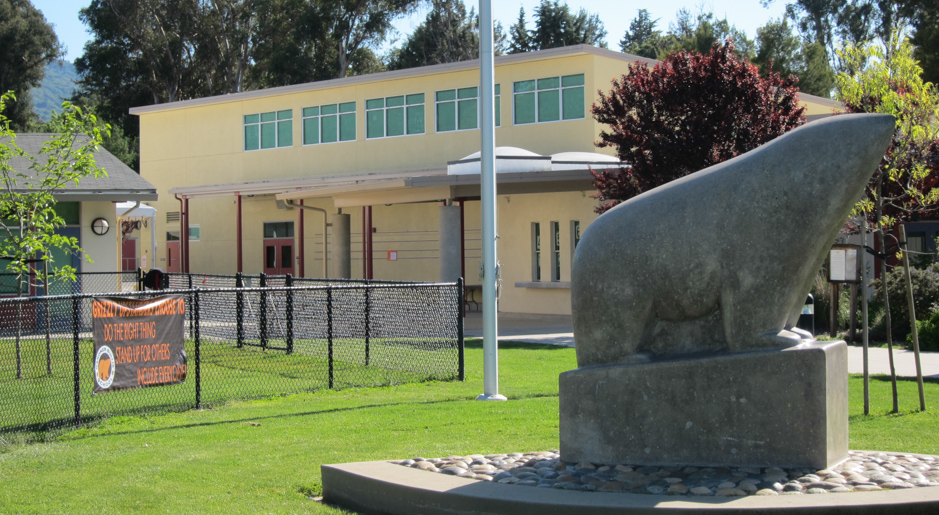 Lalahpolitico  thought all private donations had to go thru LAEF and be distributed equally among all LASD schools. Seems this policy has changed and private donations may now be targeted for individual schools.

Corrections April 29: Per LASD slides – Summer Facilities – from the April 28 LASD board meeting we learned two things. The amount of the private grant for the Gardner improvements is $2.25 million.  The Student Center will probably be a three-plex modular, not a four-plex modular. Alyssa Gallagher, architect of the makeover of LASD’s program and LASD Superintendent Baier

Fit for a Prince

It appears a private donor – one of the newer LAH billionaires – may be planning to enroll his prince in  kindergarten at Gardner Bullis.  In recent years, this benefactor has taken a strong interest in his residential neighborhood. First we saw him buying up and sprucing up downtown Los Altos, especially along State Street by adding expensive kid-friendly destinations. Then we spotted him donating a boatload of his brand of computers to LASD. Then there was a rumored large endowment to LAEF that  funds a $250K a year grant for a consultant to architect the make-over LASD’s tired, traditional instructional program. $2.25 million for “an active learning environment” …

And now there appears to be a  $2+ million donation from this “anonymous” benefactor to fund a new Grizzly Student Center at Gardner Bullis School and other smaller changes. From the drawings and plans, the Student Center appears to be a three-plex modular and a “green space” which will be installed over the summer in time  for the opening of kindergarten 2014-2015.  A brand new elaborate play structure will have to be removed.   The center will encompass the functions and space of the current library and computer lab and allow for “an active learning environment.”

Corrections April 29: Per LASD slides – “Summer Facilities” – from the April 28 LASD board meeting we learned two things. The amount of the private grant for the Gardner improvements is $2.25 million. Originally we estimated 1 to 2 million dollars. The Student Center will probably be a three-plex modular, not a four-plex modular as originally estimated. See the annotated LASD slides with diagrams of the interiors here. This brand new looking play structure is the one that will be moved about 100 feet away to make space for the Grizzly Student Center.The building on the right is the recently constructed Multi-purpose Building.

The trouble is no other LASD elementary school has a space like this!!! GB will be the one and only. The cover story for the GB favoritism is that this “outside donation” will let them test new ways to use their land. And after GB staff, students and parents  endure the stressful work of pioneering this new combo-library and outdoor green learning environment for a year or two or three,  GB will report back to LASD on what works and actually improves student  learning experiences. Thanks for that. The back of the new MPB building with the red “garage” door and concrete “stage” on the left. Most of this blacktop will be converted to a green space. A portable barely visible a left edge of frame, is one of three to be removed.

No returns vs. build 7 more centers for all schools

If  it doesn’t really help kids learn more, they will get rid of  the Grizzly Student Center I guess?  Like with that 3-D printer they tried this year.

“We’re not just going after the next shiny thing in technology — it has to be helpful to students.  For example we returned the 3-D printer we had at the beginning of the year.  When we asked if it was driving student learning and was a good use of time and money, we didn’t feel that it was.” – GB Gazette, March 2014, p. 2. [Lalahpolitico: So they had the printer for six months? An no other school had a chance to play with it?]

And if the Grizzly Student Center pilot does work, then will the “anonymous” benefactor cough up another $7 to 14+ million for 7 more student and staff centers with green “active learning environments?”  Hmmmmm. Even the portables are kind of pretty at Gardner Bullis. It must be the wide spacing and landscape? These are the only eight portables used by students. Of course the Grizzly Center will be 4 modulars, so the student-used total portables is actually 12. How about the portables at your school?

Mirror mirror on the wall, which is the fairest school of all?

Let’s put this Grizzly Student Center  into some kind of perspective. Remember back in 2003 when the Bullis campus was such an old wreck Randy Kenyon had to close it?  And remember that in 2004,  it was ruled by Kenyon to be an unfit habitat for a charter school – not “reasonably equivalent” –  but ok to put LASD’s autistic kids there?

Well, anyway, you  should see the Bullis Gardner campus now. Lovely.  It has been 20 years since I set foot on Bullis. Although the site layout is exactly the same as two decades ago, everything seems totally refurbished and is clean, freshly-painted and gleaming as if new.  My understanding is that this campus has had the advantage of being refurbished last, so it will necessarily look the newest. Gardner Bullis looks extra bright and shiny. But it was the last school to get refurbished. All the details – windows, doors, downspouts, window coverings – are actually almost EXACTLY the same across the LASD schools.             [Except for the charter of course.]

When I visited Almond school for a comparison, I found that though older and a little faded, details at Almond —  like the windows, window coverings, exterior door and handles, roofing and downspouts — were nearly exactly like those at Bullis.  I peered inside both kitchens – very nearly the same equipment and space – each with three servery windows.  Each school had three new-looking play structures distributed through the grounds. A look inside the brand new Gardner Bullis servery – kitchen. Almond has a similar one. Lalahpolitico assumes the other district schools she did not see have almost exactly the same equipment and space. [Except the charter of course]

There is a very new, spectacular looking multipurpose building at Gardner Bullis.  It does have some architectural niceties — like a separate lobby, and two main entrances — that other schools’ MPR’s don’t. The MPB at Almond lacks an impressive ARKITECT exterior, but inside is just as large, has as nice a floor, the same size stage, etc.  Both MPB’s have an exterior stage / delivery area. But only the outdoor stage at Gardner is actually useful. Unlike at Almond, the Bullis concrete stage  is outfitted with big exterior speakers so it can be used for performances sometimes. The Gardner Bullis MPB boasts a theatre-like entrance into a lobby. Some real ARKITECT work here. Yes that is cool looking light tunnel opening in the roof.

[Lalahpolitico: Why split hairs? Let’s call the two MPB’s at Almond and Bullis-Gardner reasonably equivalent even though the one at BG is newly constructed.  However, current Bullis enrollment is 3/5 that of Almond, and they have the same size  MPB? Twenty years ago that old MPB on this site was much smaller.  I should know: back then  my family moved from the Almond neighborhood to the Bullis-Purissima attendance area.  But I understand that still today Oak and one other school are still living with the old, half-size MPBs.  Favoritism? ] A peek inside the newly constructed Gardner Bullis MPB. Estimated size about 40 to 50 feet along the stage by 80 feet. The much older but well refurbished MPB at Almond School seems about the same size but orients its same size stage along the longer side. Yes, reasonably equivalent.

Lalahpolitico thinks the District has heretofore been doing a good job of keeping the District campuses very, very equal, even though they have been refurbished at different times. [Big exception with the charter school of course!]  BUT THIS GARDNER BULLIS GRIZZLY STUDENT CENTER looks like an unwelcome deviation from a stated policy of equal outcomes. I don’t buy the cover-up story,  “We’re pioneering it to see what works.”

Lalahpolitico is personally ok with letting money talk. But maybe you are not. What we can’t abide is hypocrisy. More architectural flourishes on the new MPR can be seen. In the background the tented lunch area which all the schools have. [Except for the charter school’s Blach campus, now in its third year]

Facts from the March Gardner Gazette:

Inside the Gardner Bullis Grizzly Center will be books, media, computer and collaborative workspace. LASD has paid for start-up materials for the Bullis Gardner STEM lab, including Lego WeDo robotic kits. The Bullis Gardner PTA is paying for the furniture for Grizzly.

Regarding the current STEM lab [Lalahpolitico: will the STEM lab move into Grizzly? Probably.] … “the PTA purchased most of the STEM furniture, including workplace tables, chairs, stools and locked storage cases. It also bought laptops, iPads, and a laptop cart for the lab.” [Lalahpolitico: How many? This is looking like a lot of private donation.]

“At Gardner we are committed to the responsible, equitable allocation of resources in LASD. [Lalahpolitico: Really?!?]  This outside donation is an opportunity to test new ways to use our space. We will share our experience with this new configuration with other LASD sites: what works, how the new setup affects student learning, and how professional development can support making sure that innovative spaces are used in innovative ways that truly improve learning and students’ experience.”  From Page 3 of the Gazette. This is the second major entrance to the MPB. This one will be used by staff and teachers coming from the adjacent office / lounge portables. The BG staff will be enjoying a re-decorated staff room thanks to “anonymous” benefactor.   This campus may have the nicest landscaping of them all — that’s traditionally a local school PTA project. But not buildings and computer equipment!!!! Those should come out of the general fund.

Some Site Maps of Gardner Bullis This map show the Grizzly Student Center (purple) changes more clearly than the Gazette diagram. Satellite map is a little dated.  3, not 2 portables will be removed for the green area. Gardner Bullis is LASD’s smallest enrollment school. Less than 350.  It has a much land as other schools, but most of the play areas are terraced up a hill in 3 steps.