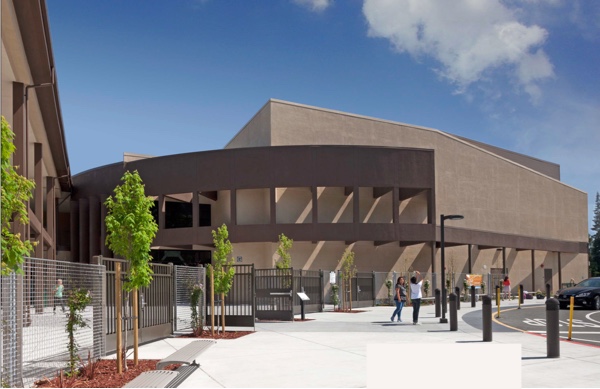 We can learn a lot about outdoor Physical Education facilities and land use from this 2013 ~9 acre, 900 student middle school in Menlo Park

The second largest piece of contiguous public lands  – after Covington-Rosita Park at 20.5 acres – is Egan School with its 18.8 acres.  About 500 plus charter students have been housed in portables on Egan for years. They – and us adult voters – are patiently  waiting for the permanent BCS facilities that the Measure N promised. It looks like it is possible to permanently situate the charter on the Egan campus in a way that is closer to “reasonably equivalent.” All the District needs to do is simply divide the campus land just an itty bit more equitably.

A key area of contention over the years about Prop 39 facilities has been a shortage of Physical Education and recess space. [Specialized teaching spaces too.] Lalahpolitico – inspired by the amazing Menlo Park Hillview Middle School, completed in 2013, wanted to see if the outdoor amenities of that Menlo Park school could be provided by LASD constructing them on the Egan campus.  My analysis says YES.

DESIGN GOALS: LASD and BCS Share nothing, not land, not buildings, not parking, not drop-offs.  A fence down the land boundary! The hypothetical should be “reasonably equivalent” so the charter won’t go running to the lawyers. Egan should  be able to do the likely grade reconfiguration, moving 6th graders to Egan and Blach. Grade reconfiguration will increase enrollment at Egan from ~600 to 900 or so. [It maybe be desirable for all students who live in the Blach attendance area to actually attend Blach – about 80 or so? – attend Egan instead.]

EGAN HARDTOP IS DOUBLE THE NORMAL

The ~9 acres, 900 student Menlo Park Hillivew Middle School has 1 acre for P.E. hardtop.  See related post.  As seen in Figure 1, Egan now has at least 2 acres of  P.E. hardtop space  [Both schools have small atriums or courtyards beyond this amount of P.E. style hardscape.] By the way, according to Lisa Gelfand, the LASD architect, most middle schools have no formal track at all, and have a lot less land per student. Figure 1: Egan’s existing hard top P.E. land is over 2 acres, when 1 acre of hard top  is common and normal.

EGAN TRACK IS A LAND HOG.
AT LEAST MOVE IT.

At about 3.8 acres the existing Egan track is nearly 70 percent larger than the Menlo Park Hillview school track-soccer field on ~2.25 acres. Lalahpolitico looked at what two “right-sized” tracks next to each other might look like on Egan. Figure 2: At Egan, two “normal” combo soccer-tracks of ~ 2.25 acres each can fit (in green and red) over the fat existing track and over a bit of the very ample existing hardtop.

As seen in Figure 2 above, locating two P.E. tracks like this — one for Egan, the other for Bullis Charter School on Egan — right next to each other would require a very awkward fence.  There could be noise interference. So I looked at downsizing the Egan track to make space for a 900 student BCS, rather than just the current ~500 student BCS. What land could be freed up? Figure 3: Downsizing the Egan track to a normal track allow the track to move left creating more space for 900 BCS students instead of the current ~ 500 students now on BCS land

In Figure 3, the bottom yellow arrows show how much the track could move left. The top yellow arrow continues the hypothetical boundary line, but that building is the City Gym, not LASD’s.  LASD will probably assert that downsizing the track “negatively impacts the district program.” They are the experts, right? [Lalahpolitico: whispering…ask them how the 6th grade, advanced math (geometry) readiness program is going. Talk about negative impact on program and on academic, social, emotional outcomes…]

So Keep the FAT EGAN TRACK and VOILA

In Figure 4 below, another hypothetical for Bullis Charter School on Egan with 900 students is basically a variant of what the LASD architect sketched a few weeks ago.  See this article for those sketches.  Her design borrows heavily from a design suggested by a citizen as early as 2013. Key features… Figure 4: So if we just move the existing 3.8 acre track left an itty bit, with a little extra land for BCS, the School District could create a ~2.25 acre track-soccer field along East Portola Ave.  for BCS exclusive use during school hours.

The private citizen’s  design for 500 Bullis Charter School students on the Egan campus or 500 North of El Camino students on that campus produced a two-story design. The architect’s plan for 900 Bullis Charter School students on the Egan campus produced a three-story design.  Lalah has scrounged up a little more land or the charter in this hypothetical than those two designs assume.  It may be possible to do two-story or a mix of two- and three-story buildings to house the 900 student charter.  Lalah agrees that most charter buildings should be massed along San Antonio, largely in order to be a sound and sights barrier. And for STUDENT SECURITY reasons.

Remember, this is just a hypothetical proposal.

Speaking of student security, it would be desirable to create an attractive fence around the Charter greenfield along East Portola, similar to the fence around the Santa Cruz Ave P.E. space at Menlo Park Hillview School, built in 2013. See Figure 5.

A new ~2.25 acre track-soccer field at Egan creates more usable, inviting open space, space that could be enjoyed by City residents and soccer leagues after school hours. This could be a net addition to useful open space at Egan. However, small parking lots might be needed along Portola to support the City Gym. The Egan main lot could be re-striped. The best part is that BCS at Blach could be removed.

Remember, this is just a hypothetical. Figure 5: Menlo Park. Google Street view. Shot with a very wide angle lens, the foto makes the two or so acres of green soccer field- track combo at the Middle School look way larger than actual. This spot is along the main drag – Santa Cruz Ave. Note the double fences. Drive by sometime.